If critics of President Trump have noticed an uptick in female devaluation, it's not reflected in the S&M scene 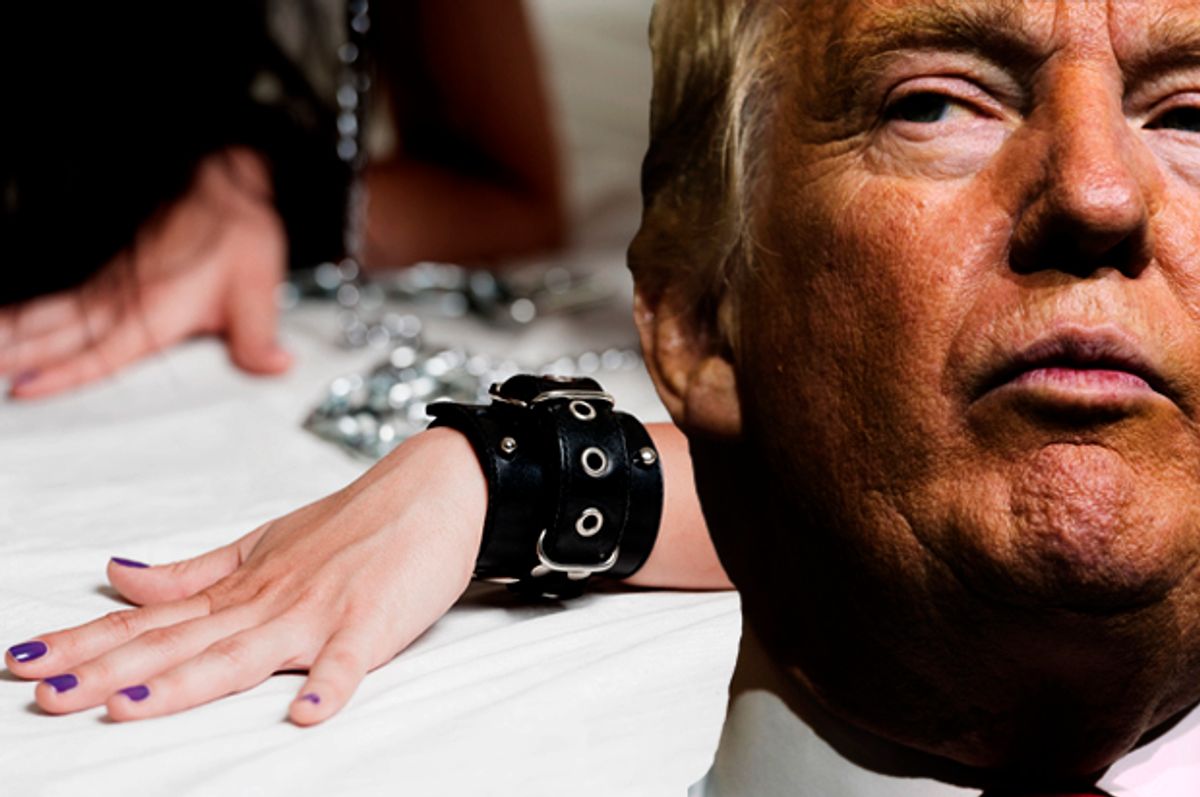 Her platform included decriminalizing all consensual sex acts between adults, funding scientific research to show that S&M is a sexual orientation and adding “kink” into laws dealing with discrimination. She also favored the idea of the prohibitioning of middle-aged white men from holding office without permission from their Mistress, and requiring men to carry purses so they can look after their own belongings.

“Women are feeling a little powerless right now,” she notes. And she’s right. In the weeks following election, sex therapist Kimberly Resnick Anderson noticed a steady decline in sex drive among her female clients. They appeared irritable and easily annoyed. Often, it was the men in their lives that bore the brunt of these developments. Anderson dubbed the phenomenon The Donald Trump Bedroom Backlash. “The misogyny displayed by Trump throughout his entire presidential bid. . . has undermined the hard-fought progress to de-objectify women,” she wrote in a think piece on the subject. “This general malaise can easily zap libido and ruin your sex drive.”

But there are those in the sex-o-sphere who haven’t abandoned their prowess. Instead, they’re using it to get even.

In an interview with Vice, Indiana explained, ““I've noticed being in the scene for over 25 years, that fetishes and kinks come in trends, just like fashion, music, et cetera. And these trends tend to be reactions to the social and political zeitgeist.”

“When I got into the business in 1989 your garden variety slave was into foot worship, and cross dressing. I see this as a reaction to changing gender roles and a need to work through those issues. Then when AIDS started to affect the straight community, things like heavy medical, blood sports, and scat became popular. People were tired of ‘safe sex’ — they wanted to do things that were dangerous and risky. “

In the world of sex, there’s only one equal and opposite reaction to an apparent uptick in female devaluation: complete female domination.

“Any time that we express empowerment during sex, that will trickle into other areas of our life,” says LaMorgese. “It’s the transmutation of energy. Everything you do influences everything else.  If you can be more aggressive, and dominant and powerful, sexually, it gives you a sort of moxie. It gives you some swagger.”

And it’s not just women pushing the trend. After the election results came in, submissive guys started posting ads on Craigslist in search of women looking to relieve some stress. One guy from New York wrote, “This is not a solution, but maybe a small, fun, cathartic escape. Take out your anger by putting me over your knee and giving me a hard spanking!”

“In the week that Trump was elected, I saw such a shift in people reaching out to me for sessions,” LaMorgese revealed. Her clients, overwhelmingly male and financially successful, fall on either end of the political spectrum. Still, the requests were more or less the same. “These clients were not looking for passive sessions, they were looking corporal punishment. They were looking for very intense sessions.”