“I have not been given any reason as to why," Khan said after he was forced to cancel a planned talk in Toronto 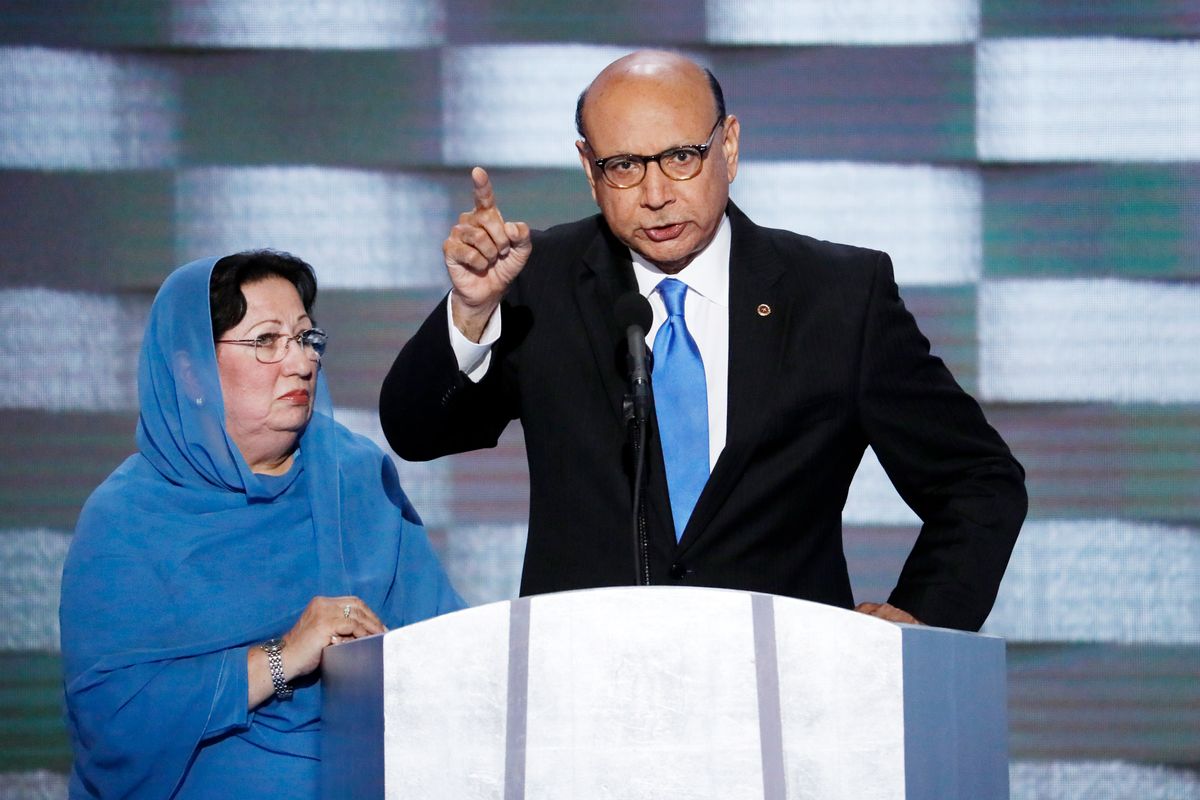 FILE- In this July 28, 2016, file photo, Khizr Khan, father of fallen US Army Capt. Humayun S. M. Khan speaks as his wife Ghazala listens during the final day of the Democratic National Convention in Philadelphia. Khizr Khan's address to Trump at the convention saying: "Have you even read the United States Constitution? ... You have sacrificed nothing and no one," was on Yale Law School librarian’s list of the most notable quotes of 2016. (AP Photo/J. Scott Applewhite, File) (AP)
--

On the same day that the White House announced President Donald Trump's revised travel ban on residents of six majority-Muslim nations, Gold Star father and Muslim-American Khizr Khan confirmed that his "traveling privileges" were under review and that his “freedom to travel abroad” had been temporarily suspended.

Khan, a Pakistani-born naturalized U.S. citizen of more than 30 years, was set to speak "about tolerance, understanding, unity, and the rule of law" at a luncheon in Toronto on Tuesday. The two-hour event was slated to include a question-and-answer session on "what we can do about the appalling turn of events in Washington — so that we don’t all end up sacrificing everything," according to the organizer.

On Sunday, however, Khan was informed that he would be unable to travel to Canada, CTV's Rosa Hwang first reported.

According to Ramsay Talks, the organization that had planned Khan's talk, the Harvard-educated lawyer's “travel privileges are being reviewed.” It is unclear what review or revocation of “travel privileges” Khan would be subject to given his status as a U.S. citizen: Anyone with a valid U.S. passport should be able to enter and leave the U.S. It is also not clear who is reviewing those privileges, as Canadian officials have not returned a request for comment.

Pakistan is not one of the six nations whose citizens are temporarily prohibited from travel into the U.S. under Trump's revised ban — which isn't scheduled to go into effect until March 16.

Ramsay Talks quoted a statement said to be from Khan in its announcement. “This turn of events is not just concerning to me, but to all my fellow Americans who cherish our freedom to travel abroad,” said Khan, whose son, U.S. Army Capt. Humayun S.M.Khan, was killed by a car bomb in Iraq in 2004. “I have not been given any reason as to why.”

At least one other Canadian organization, the Canadian Broadcasting Corporation, has confirmed that Khan's planned trip to Canada has been canceled.

TVOntario's was also set to host Khan on Tuesday:

Khan and his wife Ghazala rose to international prominence after they were attacked by Trump for daring to speak out against his anti-Muslim rhetoric and policy proposals during last year's Democratic National Convention. Khan famously offered to lend Trump his copy of the U.S. Constitution.

“If it was up to Donald Trump, [Capt. Khan] never would have been in America. . . . We were blessed to raise our three sons in a nation where they were free to be themselves and follow their dreams,” Khan said, slamming Trump’s stance on immigration. Humayun Khan was one of 14 U.S. Muslims who died serving the United States in the 10 years after 9/11. Khan' was posthumously awarded a Bronze Star and Purple Heart.

"If you look at his wife, she was standing there," Trump said in August to ABC News' George Stephanopoulos, implying that it was Ghazala's Muslim faith that had prevented her from speaking. "She had nothing to say. She probably, maybe she wasn't allowed to have anything to say."

After a U.S. veteran gifted Trump, the recipient of five draft deferments during the Vietnam War, with a Purple Heart, Khan said on CNN in a pointed comment directed in Trump's director:  "You dodged the draft.” The father added, “You had the time. You did not serve.”

On Monday afternoon Khan told CTV News he has “no comments at this time.”

Here's the latest report, via CBC: