Our tantrum president: Donald Trump needs to watch "Inside Out" ASAP

Maybe the Pixar film about an 11-year-old can help Trump manage his emotions. Or maybe we're all doomed 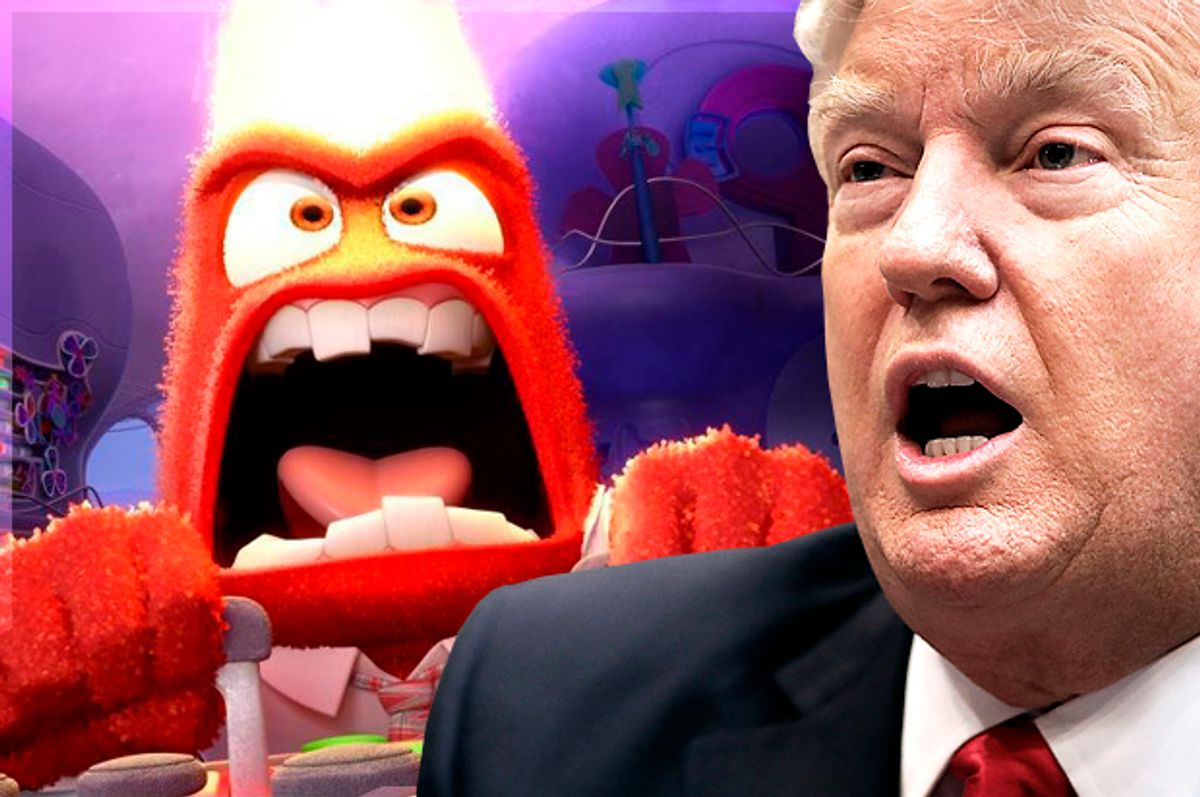 After Donald Trump's latest lies about Barack Obama spying on him during the campaign, it is even more apparent that the child king in the White House should watch the 2015 Pixar movie "Inside Out" to learn how to better control his emotions.

The president is 70 years old. Riley, the central character whose internal emotions play out on the screen in "Inside Out," is 11. Thankfully, a person is never too old to improve him- or herself.

Since becoming president, Donald Trump has acted out during the early morning and late-night hours when his son-in-law is not present to monitor his behavior. (It has even been suggested that Trump's behavior worsens when Jared Kushner and Ivanka Trump are observing the Jewish Sabbath.) At those moments, Trump has accosted his enemies, complained about reality-TV programs, lied in order to distract the public and news media from his numerous scandals and, in a new low, accused his immediate predecessor in office of ordering illegal wiretaps of his communications.

The Washington Post reported on the boiling anger that apparently fueled Trump's conduct over the weekend at his "winter White House," Mar-a-Lago in Palm Beach, Florida, where the sun "sparkles off the glistening lawn and warms the russet clay Spanish tiles, and the steaks are cooked just how he likes them (well done)":

Trump’s young presidency has existed in a perpetual state of chaos. The issue of Russia has distracted from what was meant to be his most triumphant moment: his address last Tuesday to a joint session of Congress. And now his latest unfounded accusation — that Barack Obama tapped Trump’s phones during last fall’s campaign — had been denied by the former president and doubted by both allies and fellow Republicans.

When Trump ran into Christopher Ruddy on the golf course and later at dinner Saturday, he vented to his friend. “This will be investigated,” Ruddy recalled Trump telling him. “It will all come out. I will be proven right.”

“He was pissed,” said Ruddy, the chief executive of Newsmax, a conservative media company. “I haven’t seen him this angry.”

This is not an isolated event. Since Trump defeated Hillary Clinton in November's presidential election, there have been numerous reports about his unmanageable anger. He has raged at aides, summoned up conspiratorial machinations about his enemies and generally been unpredictable, arbitrary and mercurial, sometimes filling important roles in his administration based on criteria such as physical appearance.

Based on his behavior, policies and other actions, it is abundantly clear that Trump is an authoritarian demagogue with fascist tendencies. Under such a regime, the public and the news media have become conditioned to monitoring the Great Leader's moods. This is a survival strategy. The leader's unpredictable emotions also serve as a way for the regime to create confusion among members of the public: And this teaches them to cower in fear, and also to be jubilant and relieved when the leader behaves with some degree of normalcy and decorum. These are also the behaviors of people who abuse their intimate partners or other family members.

Donald Trump has repeatedly acted in this way. The American news media and public have all too often responded like victims of his abuse.

Trump's behavior is a radical departure from that of Barack Obama.

Barack Obama was the first United States president who happened to be black. While this was a momentary break from precedent, Obama was not freed from the burdens of white supremacy and anti-black racial stereotypes. While Obama the person never resembled the caricature and bogeyman of the white racial imagination ("the angry black man" or "black beast rapist"), such deranged visions and racist objectifications still loom large in American life — and cast a shadow over his presidency.

In response, Obama embodied the cool pose. To that end, he was described by some as being like Mr. Spock, the emotionless and hyper-logical Vulcan from "Star Trek." This trait was in turn transformed into a weakness and deficit by his critics, who saw a black man holding the most powerful office in the world and managed to mark him as "too cerebral" to connect with "real Americans." In a knot that Obama continually struggled to escape from, he was also criticized by his supporters for not being angry enough and thus lacking passion and fire. Many believed or had hoped that if he had showed those traits, he would have somehow been able to break through eight years of Republican intransigence and dysfunction.

To his credit, Obama navigated those perilous straits and left office after two terms as one of the most popular and successful presidents in American history, despite the Republican Party's unrelenting opposition. Black genius and black respectability ultimately won out over white rage and white supremacy. This legacy is now under assault by Donald Trump and his revanchist, bigoted, xenophobic, nativist, racist promise to "make America great again" by destroying the political, social and economic progress charted in the decades following the adoption of New Deal policies and the heightened activity of the civil rights movement.

At this moment, we are reminded that "presidential temperament" is not an abstraction or a word uttered by the pundit classes to just fill time on TV or pixels on a screen. It is a critical concept that sums up the intangibles of leadership, responsibility and the entirety of a president's personality.

Presidential temperament matters for the day to day matters, but it matters much more at moments of potential national crisis.

On Sunday, North Korea fired four ballistic missiles into the Sea of Japan. Some intelligence reports indicate that at least one of these missiles may be able to reach the continental United States. How will President Trump respond to this escalation? Will he use it to distract the media and the public from his domestic troubles and the possibility that his administration is being manipulated by Russia and Vladimir Putin? Most terrifying, will Trump use military retaliation against North Korea as a way to divert attention from his own scandals at home?

With other presidential administrations, these would be bizarre and extreme questions that would not merit serious consideration. Unfortunately, these possibilities must be seriously considered with a Trump administration. He resembles a person picked at random from the population who is doing a horrible job of cosplaying as president of the United States. (Indeed, that's unfair: We'd have much better odds with a person picked at random.) The American people and the world have been dragged by Trump and his voters into a terrifying new reality where a temper tantrum by the immature and seemingly unbalanced commander in chief can bring doom and destruction to us all. Watch the movie, Mr. President. It's our only hope.