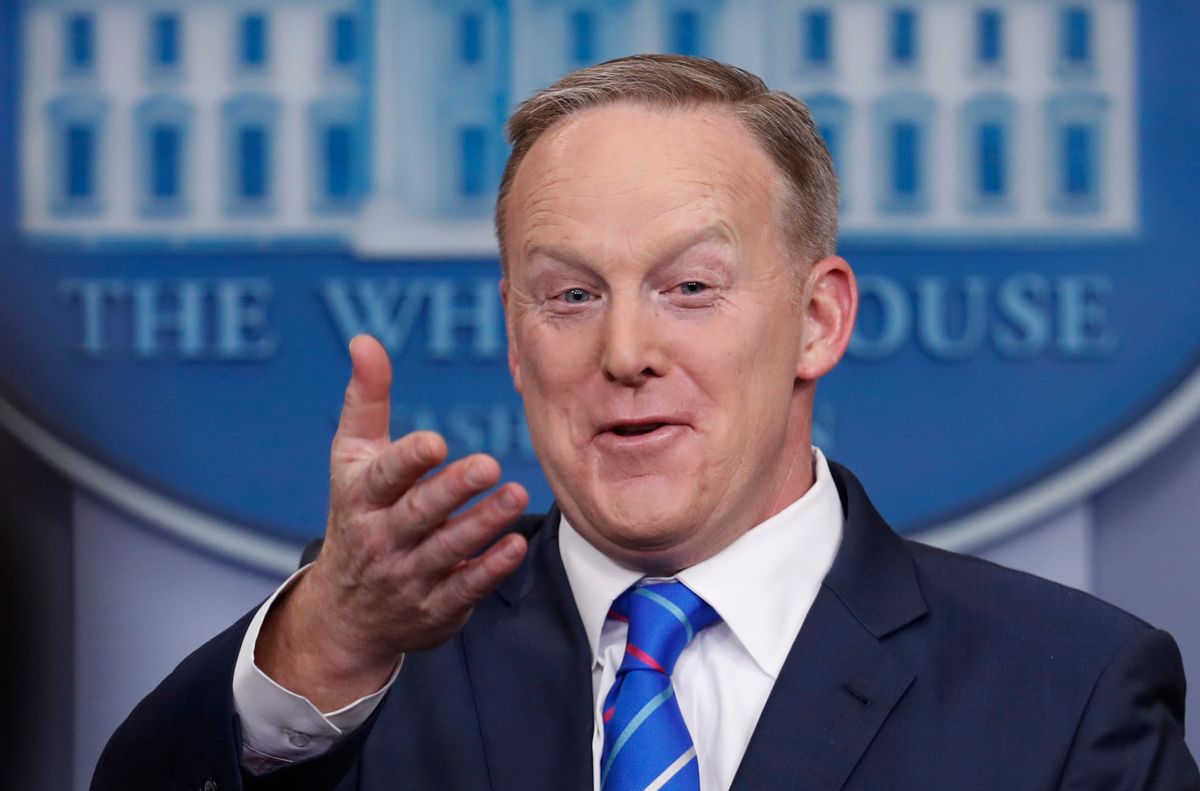 Spicer, who made the controversial decision to cancel Monday's on-camera press briefing, returned to the Brady Room podium on Tuesday where he was peppered with questions about what proof, if any, Trump had.

In a flurry of tweets Saturday morning, Trump said he had “just found out” about being wiretapped and pointed the finger at Obama, possibly referring to a recently published Breitbart article that addressed claims from right-wing radio host Mark Levin. Trump called his predecessor a “bad (or sick) guy” and likened the situation to “Nixon/Watergate” and “McCarthyism.”

But the Justice Department, not the president, would have the authority to conduct such surveillance, and Obama has said that neither he nor any White House official had ever ordered surveillance on any U.S. citizen. As Salon's Matt Rozsa reported on Tuesday, FBI Director James Comey is "incredulous” and has asked the Department of Justice to join him in debunking Trump’s assertions.

Still, the White House has called on Congress to investigate allegations only made by Trump and conservative media figures.

“Where is the proof?” CNN's Jim Acosta asked Spicer on Tuesday, who initially tried to hold the untenable position that the White House wouldn't comment on the matter any further until Congress investigated it.

“It’s not a question of new proof or less proof or whatever,” Spicer responded, admitting that he had not seen any proof himself. Still, Spicer insisted that Trump has “absolutely” no regrets about claiming that President Barack Obama ordered a wiretap on him.

NBC's Hallie Jackson tried to get at the question in a little different way, asking, "Why would the president want Congress to investigate for information he already has?"

The press secretary stumbled but eventually insisted that going through the intel committees is the proper avenue for investigating. "I think there's a separation-of-powers aspect here," he stammered.

Reuters’ Ayesha Rascoe later asked Spicer if Americans should take Trump’s declarative tweets “at face value” without any proof, to which Spicer offered what amounts to word salad:

Despite's the White House's inability to provide a shred of evidence to back its claims that Obama broke the law, Republican House Intelligence Committee Chairman Rep. Devin Nunes, a former member of Trump's transition team, announced Tuesday afternoon that his committee would investigate the president's claim as part of its Russia probe and will hold its first public hearing on March 20.

"I have not seen that evidence," Nunes admitted at a press conference Tuesday when asked about Trump's charge. "I think the bigger question that needs to be answered is whether or not Mr. Trump or any of his associates were in fact targeted by any of the intelligence agencies or law enforcement authorities."