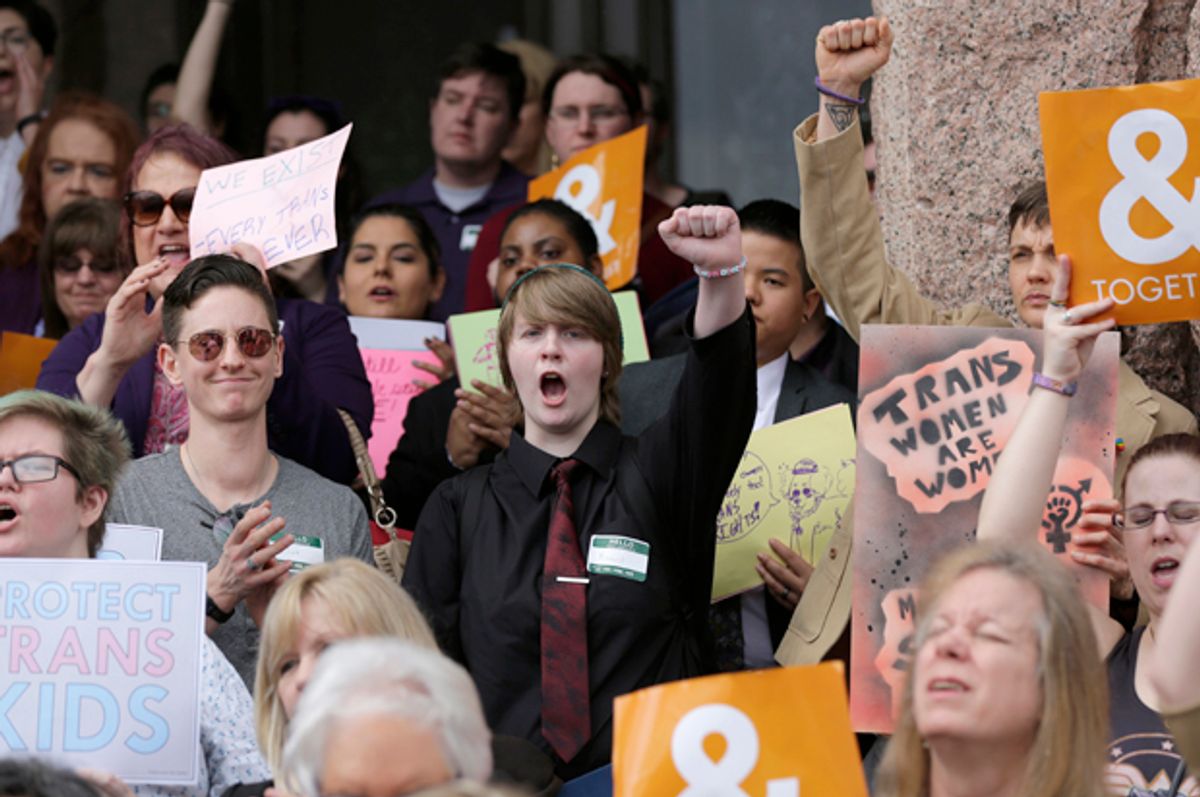 Members of the transgender community take part in a rally on the steps of the Texas Capitol, Monday, March 6, 2017, in Austin, Texas. (AP/Eric Gay)
--

A case being debated by the Texas Supreme Court could restrict the ability of married same-sex couples to access spousal benefits as part of a campaign by far-right extremists to overturn the 2015 federal ruling in Obergefell v. Hodges.

Last week the state’s highest court heard arguments in Pidgeon v. Turner, a case filed on behalf of two Houston residents, Jack Pidgeon and Larry Hicks. These two complainants argue that the Supreme Court’s 2015 decision legalizing marriage between same sex couples doesn’t extend to the provision of benefits like health insurance. The suit was originally filed against the city of Houston, which allowed LGBT city employees to place their same-sex spouses on their insurance plans following the 2013 ruling in United States v. Windsor. In a 5-to-4 decision, the court struck down the Defense of Marriage Act under the due process clause of the U.S. Constitution.

Annise Parker, then the mayor of Houston, had decided that if the federal government couldn’t discriminate against same-sex couples, neither could the city and she championed legislation to secure that right. But the complainants filed suit against Houston, arguing that the state’s constitutional ban on marriage between same-sex partners, which had been voted on by referendum in 2005, should supercede the Supreme Court's decision.

“A state court's ultimate obligation is to the Constitution, not to the jargon and innovations created by Supreme Court justices,” lawyers representing Pidgeon and Hicks claimed in court filings, adding, “Obergefell may require states to license and recognize same-sex marriages, but that does not require states to give taxpayer subsidies to same-sex couples — any more than Roe v. Wade requires states to subsidize abortions or abortion providers.”

In September the Texas Supreme Court had initially declined in a 8-1 decision to hear the case The only dissenter, Justice John Devine, argued that insurance benefits should be exclusively offered to opposite-sex couples because theirs are “the only marital [relationships] where children are raised by their biological parents.” In January, however, the court reversed its decision following months of lobbying efforts by Gov. Greg Abbott, Lt. Gov. Dan Patrick and Attorney General Ken Paxton, who filed an amicus brief urging the bench to reconsider.

If the Texas Supreme Court had already turned down the case, why would it agree to take it up just months later? The court “caved to political pressure, ” Chuck Smith, the CEO of Equality Texas, claimed.

“The Texas Supreme Court got it right the first time when they were asked to hear this case and turned it down,” Smith argued. “The reason they’re hearing it now is plain politics — pure and simple. Our Supreme Court justices in the state of Texas are elected. They’re elected by party.”

Smith added that because members of the all-Republican bench have to run for re-election, trying the case could appeal to social conservatives on Election Day.

If the court were to rule against same-sex couples, it would prevent city employees — such as firefighters, sanitation workers and librarians — from adding their (legally wedded) spouses to their insurance plans. Jessica Jones, 29, the wife of a police officer in Collin County in the outskirts of Dallas, works for a children’s advocacy center that doesn’t grant benefits to employees. An unfavorable decision would remove her from her spouse’s insurance plan. The couple is raising two children together and plans to have another child through artificial insemination. If Jones has the baby, the child would be uninsured.

“They don’t take into account how it affects so many lives,” Jones said. “My wife is a police officer and puts her life on the line every day. I work a children’s advocacy center. We’ve fostered children and adopted out of the foster system. We give back so much.”

Jimmy Flannigan, who was sworn in earlier this year as the first openly gay member of Austin’s city council, could also be affected by the decision. Were Flannigan to marry, he could be blocked from extending to his spouse the benefits that the city of Austin has allowed same-sex partners for over a decade. (He's currently in a relationship.) The Texas capital has been offering spousal benefits to LGBT employees in long-term committed relationships since 2006.

“This is offensive and brutal,” he said. “It’s about rank political cowardice.”

Flannigan added that chipping away at marriage benefits for same-sex couples is the type of political maneuver that the right wing has accused liberals of doing for decades — pushing a political agenda through the court system. He called it “hypocrisy.”

But Ken Upton, senior counsel at Lambda Legal, believes that the legal team behind the case has more than benefits for Texas same-sex couples in mind. Jared Woodfill and Jonathan Saenz, the attorneys representing the Houston complainants, are aligned with some of the state's most consistently anti-LGBT forces. Saenz is the president of Texas Values, a right-wing organization that believes “homosexual marriage [is] waging war on marriage.” In 2015 Woodfill served as the spokesman for the campaign to repeal Houston’s nondiscrimination ordinance, which falsely portrayed trans people as dangerous predators targeting young girls.

Upton claimed the ultimate goal of Woodfill and Saenz is to place the Pidgeon v. Turner case before the Supreme Court. If Texas judges rule in favor of the petitioners, there’s likely to be an immediate stay on the ruling, which could result in further action by the Supreme Court. And if Texas upholds the practice of providing benefits to same-sex couples, the complainants would have the ability to appeal that decision. The latter scenario has become more enticing with the nomination of Neil Gorsuch, a conservative constitutionalist, to the nation’s highest court.

Woodfill has been quoted as telling the Texas Tribune that “given the changing composition” of the Supreme Court he believes it could reverse its earlier decision on marriage equality — especially if more spots on the bench open up. “Ultimately, I would like to see Obergefell overturned.”

The Texas case isn’t the first attempt to change court rulings on the freedom to marry. Last year the Alabama Supreme Court declined to hear arguments that the state prohibition against unions for same-sex couples still stood, despite federal jurisprudence. Despite that case’s dismissal, the national GOP threw its weight behind such legal challenges during the 2016 Republican National Convention. The party added its intention to roll back marriage equality as a central tenet of its official platform.

Upton, though, believes these right-wing opponents of LGBT rights overestimate how much the Supreme Court wants to retry what even President Donald Trump has called “settled” law.

“Even the judges who disagreed with Obergefell — and there were four of them — I can’t imagine that they would say, ‘It’s OK for states to disregard our rulings if they don’t like them,’” Upton said. “That’s a threat to the safety of the court system generally.”

Sarah Warbelow, the legal director for the Human Rights Campaign, said while it might appear that the nation is moving to the right following last year's election, the Supreme Court has done the opposite over the past few decades. Warbelow claimed that since the 1996 ruling in the Romer v. Evans case's finding that laws blocking LGBT people from statewide nondiscrimination protections violate the Equal Protection Clause under the 14th Amendment, the Supreme Court has increasingly favored LGBT equality.

“There is a very clear trend line with the U.S. Supreme Court that doesn’t allow for differential treatment of LGBT people,” she said.

Although Vic Holmes, a retired U.S. Air Force veteran, called the Texas Supreme Court case a “slap in the face with an iron glove,” he is heartened by the increasing support from his fellow Texans. Holmes and his husband, Mark Phariss are one of the couples who challenged the state’s marriage ban following the Windsor decision. Holmes and Phariss filed an amicus brief stating that repealing benefits for same-sex couples would impose a “second-class status on our marriage.”

“At their core, [the plaintiffs in the Pidgeon v. Turner case are] asking to continue the discrimination that existed prior to Windsor and Obergefell,” Holmes, 47, said. “It’s an insult to everything we fought for.”

But Holmes and Phariss, who have been together for almost 20 years, own a lake house in Gun Barrel City, which they describe as the “most Texas city you can imagine.” The town is so named because its main road is “straight as a gun barrel,” Phariss said. They eat breakfast every weekend they’re in town at a local restaurant. After local residents saw them on the news speaking out in favor of marriage equality, some called the diner asking it to refuse Holmes and Phariss service, which would be perfectly legal. The restaurant said no.

“We don’t believe that most Texans support the blatant discrimination of LGBT people,” Phariss said. “That is not the Texans we’ve met through this process. We’ve met all kinds of great people, and they’re all on board with treating everybody fairly. I don’t think politicians are in touch with their constituency if they believe otherwise.”