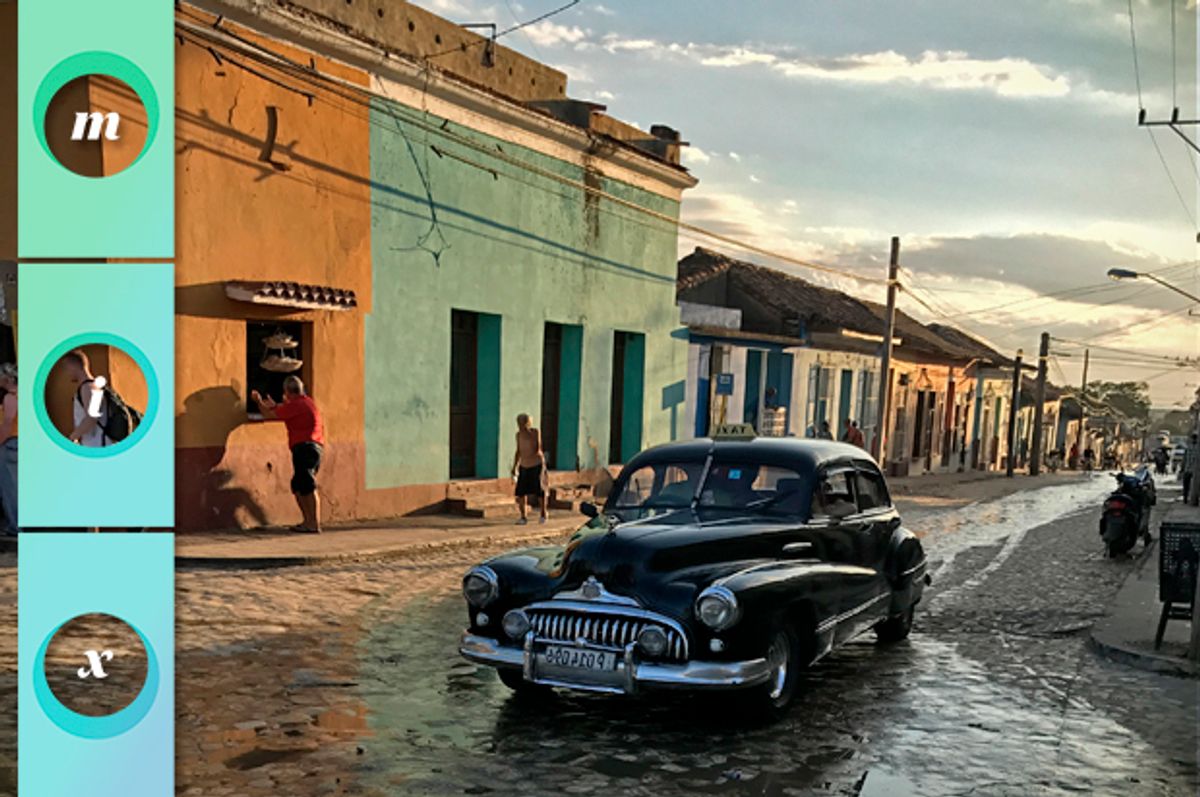 When I visited Cuba in January, I spent five long and often smoggy days schlepping around the country that is newly explorable to Americans. In spite of the air, which was often thick with diesel smog (because diesel is cheaper in Cuba than gasoline), I was fascinated by the idea that one car could last a family three generations. As a personal and family historian who used to drive in road rallies, I geek out at legacy stories, especially those involving historic vehicles.

In Cuba when your old car breaks down, there's no AAA — only the goodwill of family members and strangers you call to help you out. And this is a hallmark of the Cuban people I observed: They are some of the most generous people you will meet anywhere, with a sense of humanity that hasn't yet been eroded by smartphones, Twitter and Facebook. Only the well-off young are buried in their phones; the rest of the populace, which is the majority, still spends time talking to one another, sharing stories in person and lending a hand when needed.

Visitors to the island can ride in some of the oldest cars on the road anywhere that are still in service as daily driving vehicles (as opposed to those coddled and polished by collectors), but most tourists don't realize the tremendous history behind the pretty facades. Cuba's very history is interwoven with the many paint jobs and parts changes that these old American cars have sustained. When the U.S. embargo was put in place 60 years ago, the last imported American cars had made their way to Havana. Now there's regularly scheduled air service to Cuba for the first time in 50 years, and the cruise lines will start bringing in thousands of passengers daily this spring.

The airport is slow and flooded with frustrated American tourists, with eight U.S. airlines offering daily flights to Havana. On this side of the water, at least, opinions about Cuba are changing. According to the Pew Research Center, 75 percent of U.S. adults surveyed said they approve of the re-establishment of U.S.-Cuba relations, and nearly as many favor ending the long-standing trade embargo.

Many tourists who have decided to visit Cuba clamor for rides in Havana's famous classic cars, and will pay handsomely for one — sometimes $30, which might be two month’s of salary for a Cuban. On the average day, you’ll see many old Chevys in different bright colors speeding up and down the Malecón, Havana’s popular seaside walkway that flanks a major road.

And so in Cuba much of my travel was in these older model cars because that's still the lion's share of what's available. Even though some sanctions were lifted in 2011 to let Cubans of means buy foreign, non-American pre-1959 cars without obtaining a special permit, the prices are exorbitant. Prior to this, citizens had to obtain elusive permits, which were traded on a flush black market in cash, according to a 2014 BBC story.

Locals say the most popular models you'll see people buy from one another, and still have, are 1951 and 1955 Chevys. With two doors, rear-wheel drive, and 207 pound feet of torque, the 1955 Chevy Bel Air Sedan 235 got up to 60 miles and hour in 14 seconds. It was tortoise-like by today's standards, but coveted by car junkies. Most of the cars on the road don’t have original parts or motors, and those they came with have long since been replaced by parts from Russia and China. The 15.8 miles per gallon it promised would give any environmentalist of today a seizure or at least a fit of pique. Still, it is beautiful.

René, a knowledgable young man who drove me around Havana and its environs for several days, instead likes the lines of the very pretty 1953 Chevy. Built in Michigan when the state was still flooded with industry dollars, the 1953 is a gem, if you can find one in good condition. Men like him who are unlicensed by the government but drive tourists around are creating their own self-organized Uber-type economy, one that most visitors are happy to support.

Cuban families like Edgar's and Rene's bought cars before the revolution, and they are hard to come by. They are also unattainable for many Cubans who make an average monthly wage of $18 to $25 in U.S. dollars. When members of a family find themselves low in means, they must sell the original car, which can fetch a price of about $30,000, a ransom for the average Cuban. But then the family has no vehicle to use, and often cannot afford to replace it for a generation.

“My grandfather had a new Chevy he bought in 1955, and when my father fell on hard times, my grandfather gave it to my father, who sold it,” remembered René. René moonlights as a taxi driver, making cash to support his girlfriend and young son. On weekdays, he buys and sells used car parts for Russian cars, the newer models of which are popular in Cuba and more readily available than some other modern cars. “I am the first person to buy a car in my family since my grandfather,” he says of the 2013 impeccably clean compact he drives daily.

Cuba faces many challenges under its Communist rule, among them a shortage of supply in all areas.

"There is slow change," said Jukka Laitamaiki, a professor at the NYU School of Professional Studies Jonathan M. Tisch Center for Hospitality and Tourism. "People are being paid low government salaries, not like in the U.S. where 80 percent of GDP is based on private consumption."

"It’s a challenge — how do you channel more money into the economy?" Laitamaiki continued. "Going around the country, the train is not an option, Viazul [bus company] has limited schedule and capacity. The big issue as you look at in the Cuban economy, is that you have very small income, and the rest of the time when the [food] rations run out after a week, you have to, as Cubans say, figure it out." Listen to a longer audio story about Cuba tourism featuring Laitamaiki:

Edgar, a taxi driver with gray at the temples whose red 1955 Chevy gleams in the sunlight, waits for a fare outside a local’s home in Playa Ancón. His car is immaculate, and he said it’s been in the family since his grandfather bought it in the 1950s. His abuelo (or grandfather) seldom drove it, and after that, it went to his dad, who also put few miles on the car. By the time it was handed down to Edgar, the vehicle had seen a lot of life, despite the care that had gone into preserving its interior and exterior, and many years had passed.

When I asked what his most important memory was from the days spent driving this 62-year-old piece of steel around, Edgar joked that he became divorced in the car. So it can be said that these old and irreplaceable vehicles hold a unique sort of legacy — one that speaks to the need for knowing where you come from, bearing up under oppression and retaining a few precious things from before the revolution.

By contrast, Pablo drives a kitted-out Jeep Wrangler with an extended bed — which he built out himself — so he can fit in more tourists who need rides. He decided he wanted a newer fleet of cars than the classics because they run better, though he, like Edgar, grew up riding in vintage American cars — things that came from a country that seemed so far away and inaccessible but was actually a short plane ride away.

Pablo is a curious mix of old and new Cuba: At age 25, he isn’t preoccupied with his mobile phone, and he only uses it when he is picking up a fare — or to call his mother, he said with a laugh. Yet he prefers newer, faster and more expensive cars over the challenges of old Chevys. He went to medical school but decided to become a driver and own his own cars (he has three now) because there's better money in driving tourists who pay in cash, but he nevertheless appreciates the old Cuban — and communist — value of hard work that serves many.

During the long trip back to Havana from Trinidad, he shared his life stories in Spanish and said Cuba is better without too much technology, modernity and material wealth because Cuban people have walking and talking ingrained in their cultural fiber. “We walk over to each other’s homes, and sometimes we drive, but we go to talk to each other, laugh, and tell stories,” he said. “We don’t need to be on cellphones all day long.”

True to Cuban helping form, when we see a man he doesn't know dressed in a toll collector's uniform standing along the highway holding a young daughter's hand, he pulls over and offers them a ride, without asking how far they are going. With the man's permission, I offer the girl a piece of chewing gum, and we all settle into the darkness in comfortable silence, American dance music playing on the radio.