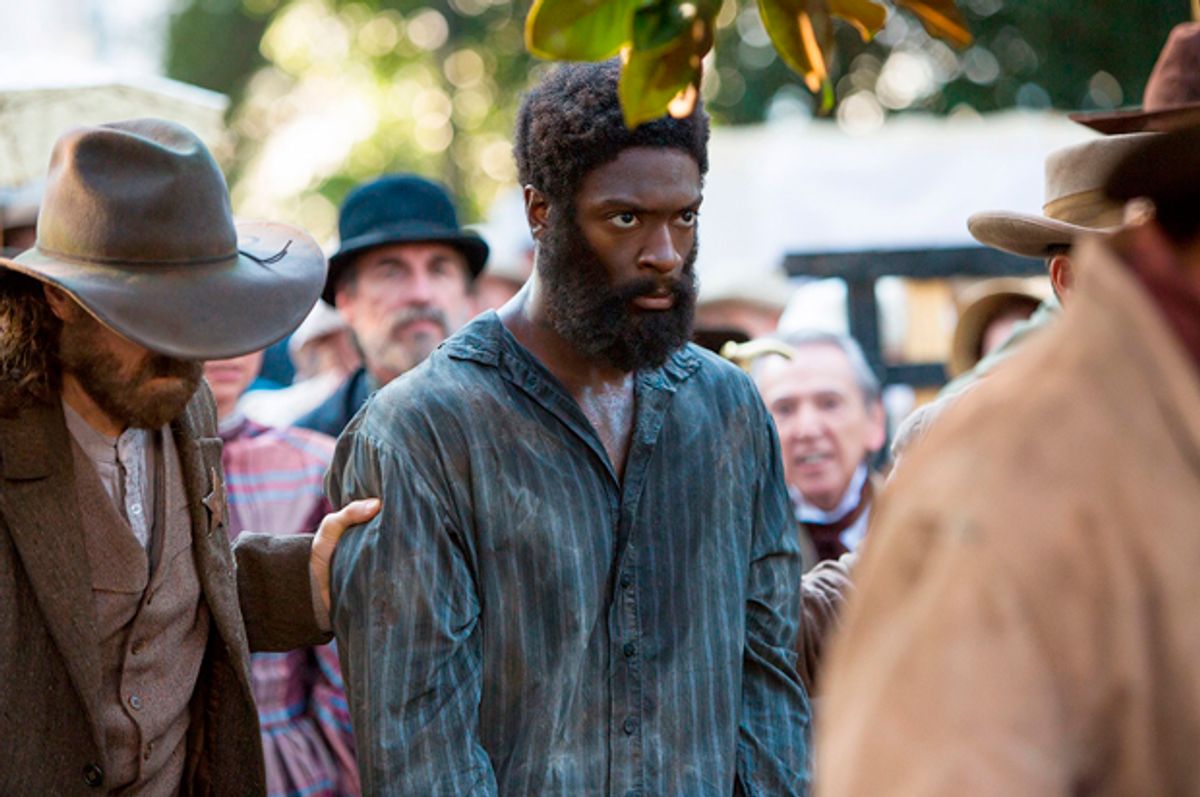 WGN America could not have asked for a better promotional tool for the season premiere of “Underground” than our new Housing and Urban Development Secretary Ben Carson.

The second season of “Underground” premieres Wednesday at 10 p.m. — two days after Carson characterized the horror endured by Africans stolen from their homes and families as an immigration fable.

Just like those 20th-century Europeans arriving on Ellis Island with eyes and hearts full of hope, Carson told HUD employees, "there were other immigrants who came in the bottom of slave ships, who worked even longer, even harder, for less, but they, too, had a dream that one day their sons, daughters, grandsons, granddaughters, great grandsons, great granddaughters might pursue prosperity and happiness in this land."

There is more fantasy in this statement than a viewer will see in the entire second season opener of “Underground,” which is saying something. The WGN America drama is a fictional tale but one based on history, documentation and accounts from people who would likely correct Carson by saying they worked so they wouldn’t be tortured or killed.

Unlike immigrants, who came to America of their own volition, slaves were not free. Not even those afforded some independence were free. One of the second season’s new characters, a stonemason named Daniel (Bokeem Woodbine), illustrates this. Daniel is an artisan whose incredible talents are in high demand.

The viewer watches him polish one of his elaborate creations, his face glowing with satisfaction. A white man hands over lots of money for it. But the money doesn’t belong to Daniel. He has to turn over nearly all of it to the white man who owns him, after which Daniel heads back to his modest home.

While it’s true that men and women like Daniel have dreams, “Underground” shows that their topmost drive is staying alive. Living freely, for most, is a secondary concern.

And yet, that flicker of a notion motivates people like Daniel, who is teaching himself to read by poring over scraps of discarded newsprint. Today we take literacy for granted, but what Daniel is doing is a small act of resistance in the late 1850s, when America was on the verge of the Civil War.

Life was different back then — in some ways. What's interesting about “Underground” is its multiple parallels between that long-gone era and the present. The drama’s America is fiercely divided along racial and economic lines, and the rift between wealthy and poor is stark. The dominant culture has little regard for the children of the downtrodden classes and outsiders. Its justice system is in turmoil, and a resistance movement is growing more vocal and organized.

There’s everyday heroism in “Underground," too, seen in simple acts such as Daniel writing the word “LOVE” as a gift, a seed of hope to inspire the oppressed to live through another day. Prosperity? Happiness? He can entertain those ideas later — say, once the simple act of reading is no longer a crime punishable by death.

When "Underground” premiered a year ago, television executives had only recently started to embrace the view that dramas built around majority black casts can have broad appeal. But this one also focuses on slaves on a Georgia plantation, a premise that hadn’t been explored since “Roots” first did so in 1977.

Recall that ABC similarly saw the broadcast of “Roots” as a gamble in 1977. Executives had feared that American viewers would not want to watch an unflinchingly portrayal of one of our country’s darkest chapters, so they planned to air it over eight consecutive nights in January to get it out of the way.

This was before a stunning 85 percent of Americans in homes with televisions watched all or part of “Roots,” with nearly half of the country tuning in for the final episode.

With this success, the original “Roots” became a standard setter for scripted dramas about slavery and the Civil War. Future treatments of the era — there weren’t very many, beyond the mini’s sequels — treated the subject with such solemnity and severity that viewing them could be about as thrilling as a glass of unflavored fiber supplement. (History’s 2016 remake honored the original while imbuing the story with a modern vigor.)

Nearly four decades later, “Underground” dares to infuse its slavery narrative with the electricity of a heist film set to a hip-hop soundtrack, courtesy of its executive producer John Legend and co-composers Raphael Saadiq and Laura Karpman.

While the group of slaves known as the Macon 7 make their dangerous break for the North, the story remains connected to the politics binding the plantation from which they fled. The Macon 7 plotline centers on the group’s leader, a blacksmith named Noah (Aldis Hodge) and Rosalee (Jurnee Smollett-Bell), a house slave whose mother Ernestine (Amirah Vann) stays behind on the plantation to serve its owner Tom Macon (Reed Diamond).

The escapees’ travails and tragedies stoke the audience’s anxieties, while Tom’s political aspirations and his secret love affair with Ernestine invests viewers in the drama’s soap opera subplot. The danger, romance and brutal tragedy connected to each of those story arcs earned each episode a healthy 3 million viewers on average, making “Underground” WGN America’s most-watched original in its history.

But if season 1 felt timely and relevant, the second season feels even more so. Not only that, it has a new purpose: In place of the first season’s harrowing flight is a story of defiance and resistance that clarifies the purpose of each character’s mission.

Specific details about “Underground” will be discussed in the following paragraphs, so unless you don’t mind being spoiled, stop reading now.

Series creators Misha Green and Joe Pokaski previously worked together on NBC’s “Heroes,” and their fondness for genre programming’s traditions blossoms in the second season through the stories of Rosalee, Noah and Elizabeth Hawkes (Jessica de Gouw). Each passes through a separate crucible within the season’s first three episodes.

Rosalee has built a reputation for herself as a trusted associate of Harriet Tubman (Aisha Hinds), assisting her on daring missions to lead runaways to safety. Hinds’ intensity makes Tubman a formidable figure, and her portrayal helps Smollett-Bell transition from the meeker Rosalee of the freshman season into the determined force seen in season 2.

Rosalee is committed to going back for Noah, who sacrifices himself in the first season's finale so she can get away. But Noah is not waiting to be saved. Neither is Elizabeth relying on society’s respect for her husband John (Marc Blucas) to keep her safe.

As John uses his skill as an abolitionist lawyer to save Noah’s life, Elizabeth decides to join a sewing circle led by an abolitionist Georgia (Jasika Nicole) to increase her investment in the cause.

In “Underground,” the knowledge that no character is safe lends weight to the escape’s daring while also preventing their deaths from becoming exploitative. Resourceful though the Macon 7 were, they were also outnumbered and outgunned. No viewer could expect all of them to make it. But “Underground” quickly made it clear that the plantation held no guarantees for safety either. Several beloved characters died there, one sadistically. Others receive their comeuppance, even if the eventual outcome was bittersweet.

The first season's lack of predictability makes it an addictive viewing experience, and that continues in season 2. Ernestine, for instance, gets payback for a nightmarish murder committed as an act of political theater. Her price is to be sold off to a rice plantation to work the fields, a reversal that leads her to drown her sorrows.

And Ernestine’s lot is one component of the second season’s expanded universe; the first three episodes focus on the perils waiting along the Underground Railroad itself as well as the inner workings of the abolitionist cause.

One of the smartest aspects of “Underground” lies in its portrayal of slavery as an institution that perverted all parties involved. Neither were its characters’ moral purity divided along racial lines. Christopher Meloni’s slave catcher August is motivated purely out of financial desperation during the first season; now, a rage-driven personal vendetta keeps him going. Alano Miller’s Cato, a fellow Macon slave, starts out as more of an antagonist than ally. His second season appearance raises more questions.

Replacing Tom Macon as the show’s top villain (though he's the kind who doesn't see himself as a villain) is a fame-hungry slave hunter named Patty Cannon (Sadie Stratton), who is desperate to secure her legacy as the woman who catches Tubman.

Hinds’ Tubman is the first of several historical figures making cameos in during the second season of “Underground.” The show’s writers have found a way to deftly weave her into its fictional world in a way that feels honest and honors her legacy. Legend is also set to appear in an upcoming episode as Frederick Douglass, who, as you may have heard, is somebody who’s done an amazing job and is being recognized more and more.

Maybe our new secretary of the Department of Housing and Urban Development should be required to make time to watch “Underground.” It may not be an historic account, but its understanding of the complicated soul of history, particularly this history, makes these new chapters remarkable viewing. And who knows? It might even teach Carson the difference between immigrants and slaves.