When Daenerys Targaryen and Jon Snow return, our realm will be in the midst of summer 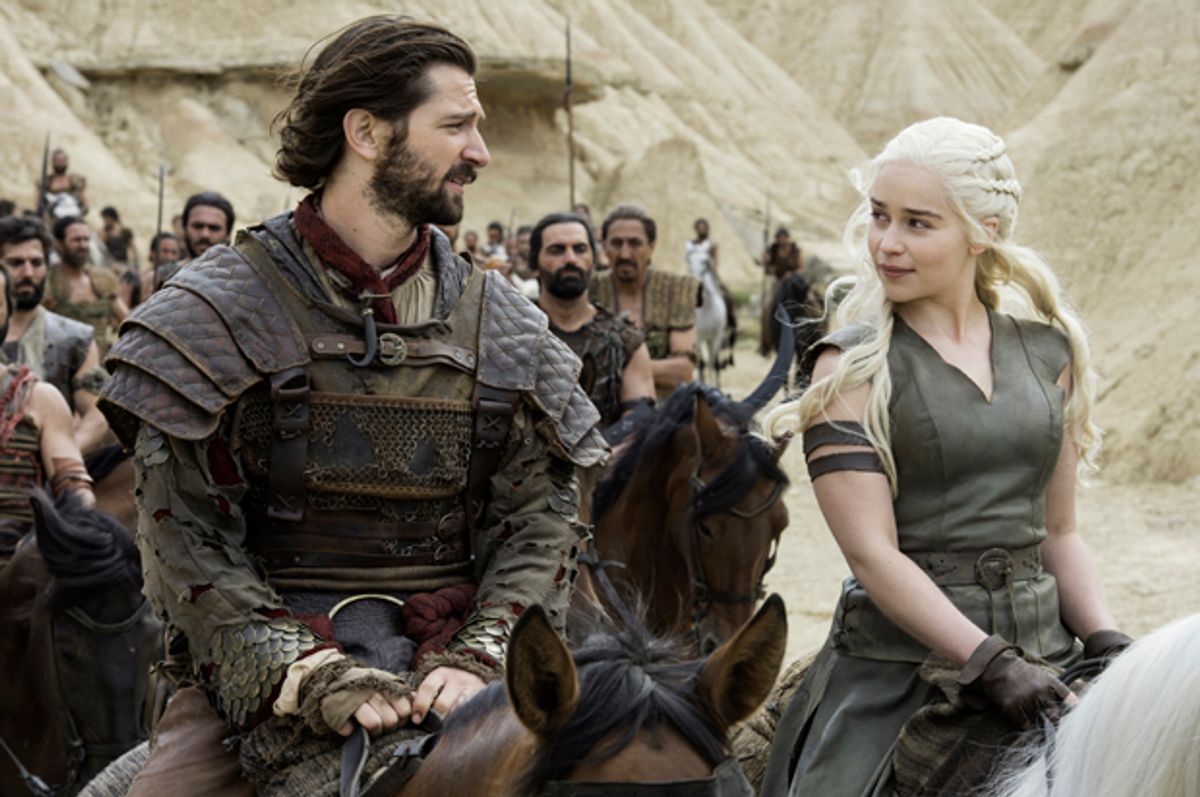 Facebook
Twitter
Reddit
Email
view in app
It is said that the Wall, the 300-mile long, 700-foot tall structure that protects the Seven Kingdoms in "Game of Thrones" from wildlings and other dangers lurking in the frigid realms beyond, was created eight millennia ago with human effort and magical means. Nothing has gotten through the wall without the sworn brothers of the Night's Watch letting it pass.
Thus it was probably not the best idea for HBO to lock the Season 7 premiere date inside a massive block of ice, only to reveal it after pillars of flame had melted for enough of it to witness the banner. Since the melt took well over an hour, we'll spare you the wait: The seven-episode seventh season debuts on July 16.
On Thursday morning, the Facebook Live reveal was teased as "an exciting way" to find out when the long-delayed drama would return.  The event lured more than 112, 000 users to the "Game of Thrones" Facebook Live feed at about 11 a.m. PST, urging them to comment "FIRE"  and later "DRACARYS," in order to get a couple of flamethrowers to thaw out the news more quickly. And yes, I watched the entire business unfold because — journalism.
By 11: 45 a.m. PST, the ice still had not melted. By 11:46 a.m., the feed had crashed — for a second time. By an hour along if someone was looking for that premiere date, no dice, still plenty of ice. Epic fail? Perhaps.
But can you think of another series that made watching ice slowly liquefy into a social-media event? Even in the midst of the second Live attempt the number of views had topped 125,000. Once it was clear the cube was not yielding, the number of views slid down just as quickly.
"Just stick the ice in my drink," one user quipped. "It will melt much faster."
Another joked, "This just in: Season 7 and Winds of Winter will NEVER be released."
At least the manufactured delay stuck with a theme, since the debut of Season 7 comes much later in the year than previous ones. The times have grown cold in "Game of Thrones," and that inspired showrunners David Benioff and D.B. Weiss to wait for weather conditions in the drama's production locations to reflect them. Filming began in August 2016 in Belfast, Ireland, and wrapped in February. In addition to Ireland, locations in Iceland and Spain also doubled for Westerosi territories.
And as winter chills the realm, a deadly abomination is on the march as well. At the end of season 6,  Jon Snow (Kit Harington) retakes Winterfell, the Stark family's stronghold, and reunites the north. But the Night King and his horde of frozen zombies are marching on the Wall.
Meanwhile Daenerys Targaryen (Emilia Clarke) and Tyrion Lannister (Peter Dinklage) are crossing the Narrow Sea with an armada of ships manned by the Ironborn and teeming with Dothraki warriors, Unsullied fighters and other minions faithful to Khaleesi. But in King's Landing, Cersei (Lena Headey) has taken what was hers, in a gigantic green tower of Wildfire.
"Game of Thrones," based on George R.R. Martin's fantasy book series "A Song of Ice and Fire," is one of the most popular series in the world and a two-time Emmy winner for Outstanding Drama. And Benioff and Weiss intend to go out on top. They have confirmed that "Game of Thrones" will end after this upcoming season and the eighth, which presumably will debut next year. The final seasons are shorter than the drama's previous 10-episode installments; the eighth season is expected to consist of six episodes at least.
At this rate, HBO's "Game of Thrones" will beat to the finish line the books upon which the series is based. The drama has been off the page since the beginning of season 6, and Martin's publisher Penguin Random House has yet to announce a release date for "The Winds of Winter," which the author been teasing since 2010 via snippets posted on his official website.
Concerning Thursday's social-media meltdown, it's doubtful that "Game of Thrones" will suffer any repercussions for freezing out fans for an hour and 12 minutes. "If y'all think this is taking a long time," another Facebook user joked in the midst of everything, "try waiting for GRRM to finish the books."