Public land debate, without the public: GOP Congress votes to shut out citizens from discussion of federal land use 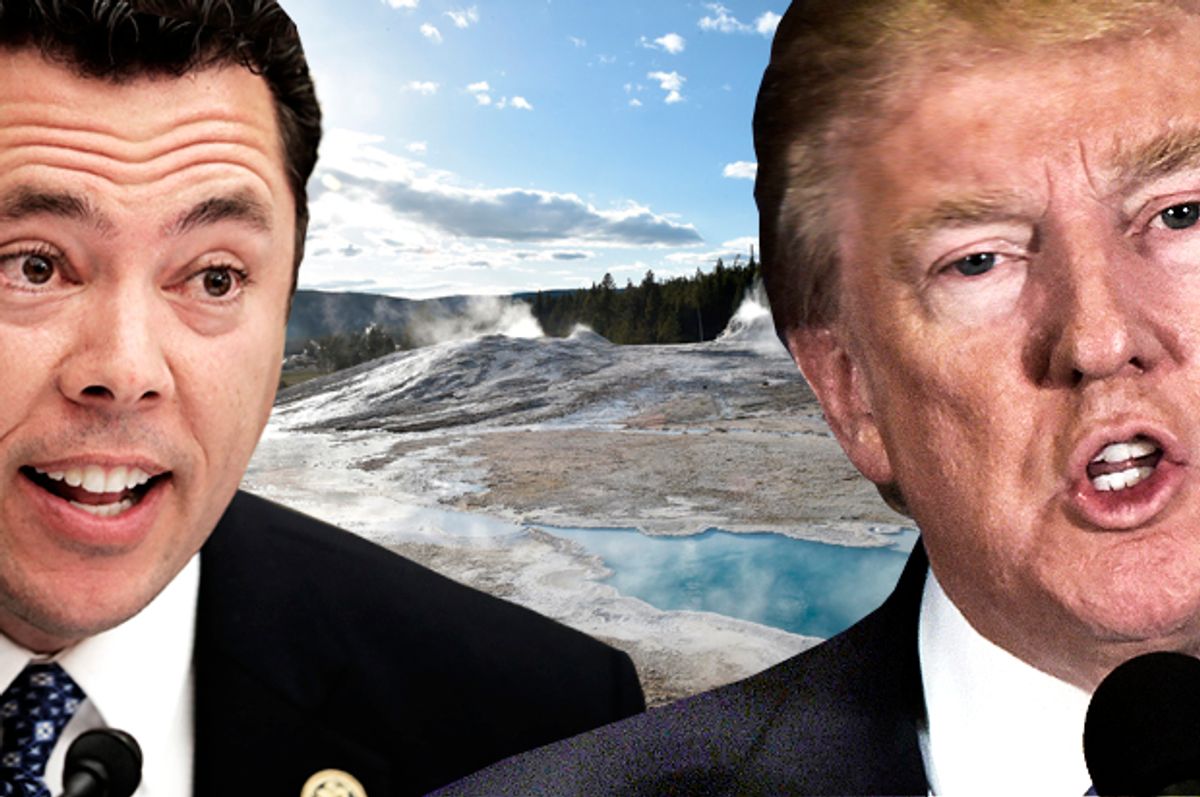 For years now, there's been a growing radical right-wing movement to battle federal land ownership and management. The movement takes many forms, including the Bundy family demanding the "right" to graze cattle on federal lands without paying fees, Oregon militiamen occupying a wildlife refuge to protest environmental protections on federal lands and hard-line right-wing congressmen like Rep. Jason Chaffetz trying to sell government-owned land to drilling and logging companies.

But while the attacks on federal lands have varied wildly, the talking point is always the same: The hard-right ideologues argue that federal control over the land is somehow undemocratic and the control or ownership should be turned over to "the people." This argument has always been nonsense because, by definition, the federal lands are owned by the people. Efforts to preserve them and charge fair prices for their use is about protecting them.

But this week congressional Republicans proved once and for all that the conservative war on federal lands has never been about "the people." On Tuesday in a party-line vote, Senate Republicans passed a resolution previously approved by the House in February that drastically reduces and in some cases shuts out the voice of the public in determining how federally owned lands will be managed going forward.

If President Donald Trump signs this bill — and so far he has happily signed a number of such resolutions — it will torpedo a regulation that took years of work by the Obama-era Bureau of Land Management (or BLM) to update how federal lands are managed. The regulation, nicknamed BLM Planning 2.0, was designed to modernize the way the bureau handled plans for federal land management. It's all a lot of dry language, but underneath it all lies a churning debate over whether members of the public can have a say in how federal lands are used or if they'll be shut out of the process by the fossil fuel, logging and agriculture industries.

This latest move is just the latest in a series of actions by Republicans in Congress striving to dismantle regulations developed by various federal agencies under former President Barack Obama. Under the Congressional Review Act, there's a window during which rules that were completed after June 13 can be terminated by Congress before they go into effect. Most of the regulations targeted are related to environmental protection. This BLM Planning 2.0 regulation is one of them.

“The rule that was just struck down would have provided for more transparency and more public participation in the planning process," Phil Hanceford, assistant director of the Bureau of Land Management Action Center for the Wilderness Society, explained by phone. Hanceford had played a role under the Obama administration in helping the bureau write the 2.0 regulation.

Rather than drafting a plan to allow drilling on a plot of public land and then releasing the draft to the public, the 2.0 regulation would involve the public early on. It would also require the agency to take into account scientific information, including whether a proposed use of the land would contribute to global warming.

“We need to have a transparent process that takes into account all stakeholders, whether they’re the Sierra Club or a local county commissioner or the oil industry: That’s all it says, basically," said Athan Manuel, the director of the Sierra Club's Land Protection Program. “Why wouldn’t the public be engaged in federal land-making decisions on federal lands that are owned by the public?”

Stakeholders for public lands are an incredibly diverse group, since the property, after all, belongs to everyone. There are Native American tribes that may have historical stakes, local residents whose lives are intertwined with the lands, environmentalists and people who want to use the land for outdoor recreation.

Lown-Hecht's group, by itself, generated 25,000 letters defending the 2.0 rules that were sent to congressional representatives, she said. This issue cuts across party lines as many of the hunting and fishing enthusiasts whose voices could be cut out of the planning process tend to lean more conservative. But despite all the support for the 2.0 rules, congressional Republicans voted to snip the public out of the federal land planning process.

"To me, this just proves that some members of Congress are beholden to special interests like the oil and gas industry, which was heavily involved in limiting the public voice on public lands," Hanceford said.

Manuel agreed, saying he assumes Republicans "don’t like having conservation and science on the same footing as drilling, logging and grazing” in the decision-making process.

To make everything worse, the damage done by the Republicans cannot be undone, even if a Democrat were to be elected president in 2020. The Congressional Review Act explicitly forbids federal agencies from proposing rules similar to ones struck down by Congress in this fashion.

Everyone interviewed for this story seemed shocked that Congress did something so drastic and shortsighted, and guessed, as Lown-Hecht said, the "zeal to roll back regulations from the Obama era" is prompting a shoot-'em-all-and-let-God-sort-'em-out mentality.

As Manuel noted, the 2.0 regulation itself wasn't really a "red meat" issue for Republican voters. After all, the 2.0 rules protect hunters and fishers who use public lands and want a voice in their futures. So Republican lawmakers have shut out many of their constituents from having a say in what happens to land they pay for with their tax dollars.

It's a sign of what the Republican Party has turned into, especially in the era of Trump: an authoritarian entity that's deeply suspicious of democratic systems and that wants to minimize in the governing process the voice of citizens, even those who tend to vote Republican.