His fondness for a French reactionary has made headlines, but he has cited worse 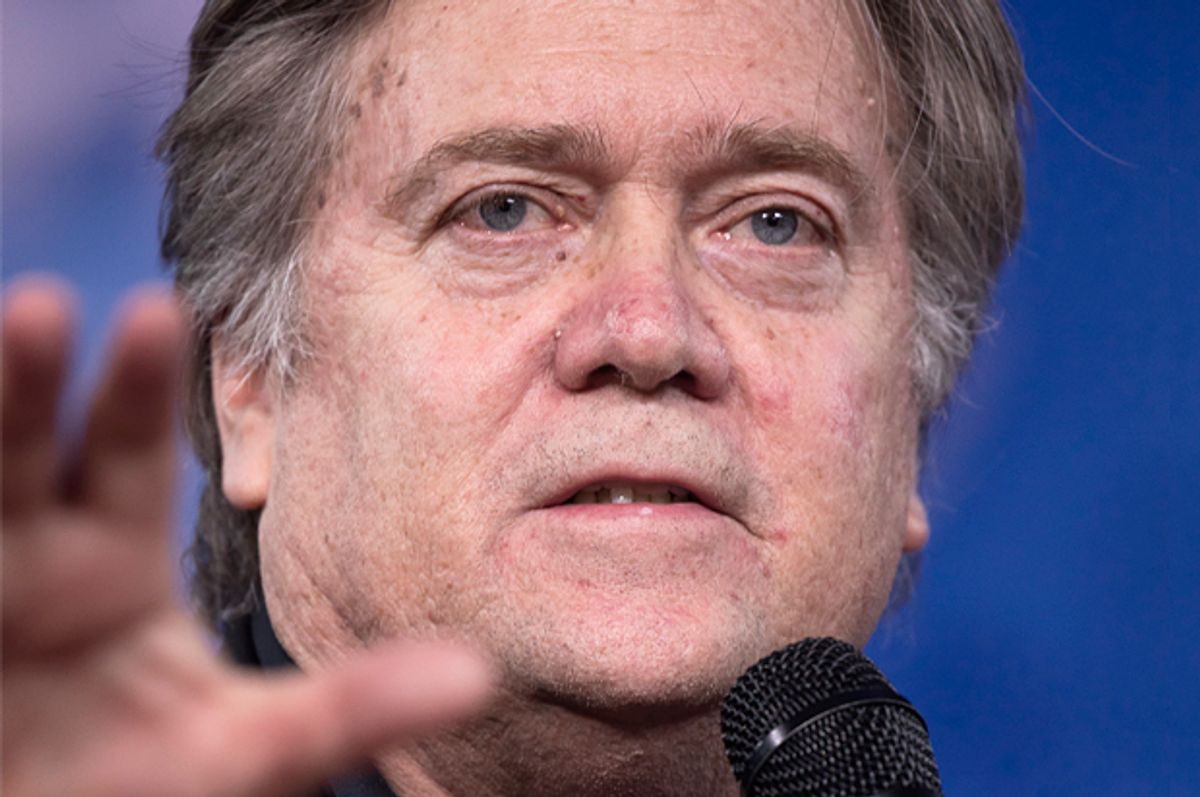 Steve Bannon just can't help himself. Despite the media glare that comes with being the president's chief strategist, the former Breitbart editor-in-chief continues to cite fascists and white supremacists without compunction or even discretion.

A recent investigation by the Huffington Post exposed how Bannon's fondness for "The Camp of the Saints", an obscure French novel that portrays a race war between the "civilized" white West and the evil brown hordes of the so-called East. The Huffington Post highlighted several interviews in 2015 and 2016 in which Bannon compared global politics and the refugee crisis to the plot of the book, which has been likened to Adolf Hitler's "Mein Kampf".

"The Camp of the Saints", which takes its title from the Bible, was written by ultra-reactionary French author Jean Raspail, who openly describes himself as a "royalist" who wants to restore the Catholic monarchy. In the book, he describes hordes of Indians trying to conquer white Western Christendom as "thousands of wretched creatures" and "turd-eaters."

The Huffington Post described the novel Bannon admires as "nothing less than a call to arms for the white Christian West, to revive the spirit of the Crusades and steel itself for bloody conflict against the poor black and brown world without and the traitors within."

Yet Bannon's admiration of "The Camp of the Saints" is by no means an isolated example of his extreme far-right politics. The New York Times pointed out that Trump's right-hand man cited Nazi-affiliated Italian philosopher Julius Evola in a 2014 speech at a Christian conference.

A big fan of Nazi leader Heinrich Himmler, Evola spent years in Nazi Germany, where he gave lectures. He personally welcomed Mussolini to the Wolf's Lair, Hitler's military headquarters. In a post-war trial in 1951, Evola denied being part of Mussolini's fascist movement, which was apparently not bombastic enough for his tastes; instead, he proudly declared himself to be a "superfascist."

Neo-fascist leader Richard Spencer told the Times he was excited that Bannon knew of Evola.

"It means a tremendous amount," Spencer said, adding that Trump's chief strategist "is at least open to them."

I reported on Bannon's 2014 speech, in which he described his belief in an intractable violent conflict between the "enlightened" Christian West and the forces of Islam, secularism and socialism.

"We're at the very beginning stages of a very brutal and bloody conflict," Bannon warned. "We are in an outright war against jihadists, Islam, Islamic fascism."

He condemned the "immense secularization of the West" and the increasing secularism among millennials, and insisted that Christians must "bind together and really form what I feel is an aspect of the Church militant, to really be able to not just stand with our beliefs but to fight for our beliefs against this new barbarity."

Right-wing pundit Glenn Beck went so far as to compare Bannon to the Nazi propagandist Joseph Goebbels, calling Bannon "quite possibly the most dangerous guy in all of American politics."

Fascist forces in the West are not the only ones that find a kindred spirit in Bannon. Bannon's mortal enemy, Islamist extremists, share Bannon's eschatological, clash-of-civilizations worldview. In fact, al-Qaeda identifies so much with Bannon's ideas, it put him on the front page of an affiliated newspaper, al-Masra.

The genocidal Islamic State has made it clear that its goal is to destroy the so-called Grayzone, or space where Muslims are accepted in Western countries. Far-right leaders like Trump and Bannon—along with their extreme, anti-Muslim counterparts Marine Le Pen in France, Geert Wilders in the Netherlands and beyond—help extremist groups like ISIS and al-Qaeda fulfill their missions.

ISIS has rejoiced at Trump's presidential victory. An ISIS-affiliated media network said, in a translation quoted by the Washington Post, "Trump's win of the American presidency will bring hostility of Muslims against America as a result of his reckless actions, which show the overt and hidden hatred against them."

Before becoming Trump's right-hand man in the Oval Office and CEO of Trump's campaign before that, Bannon was previously chair of the far-right website Breitbart News, and a founding board member. Bannon proudly described Breitbart as "the platform for the alt-right," using the popular euphemism for the white supremacist movement led by neo-fascists like Richard Spencer.

Spencer, who adores Trump, is an avowed white supremacist who coined the term "alt-right" and edits a website of the same name, where he has published articles justifying "black genocide." At a fascist conference in Washington, D.C., in November, Spencer was caught on camera shouting "Hail Trump! Hail our people! Hail victory!" a reference to the Nazi slogan "Sieg Heil."