Was Trump compromised by Russians? We don't know — but we do know he adores authoritarian thugs

Illegal connections with Russia? We may never know, but Trump’s romance with brutal strongmen is the real problem 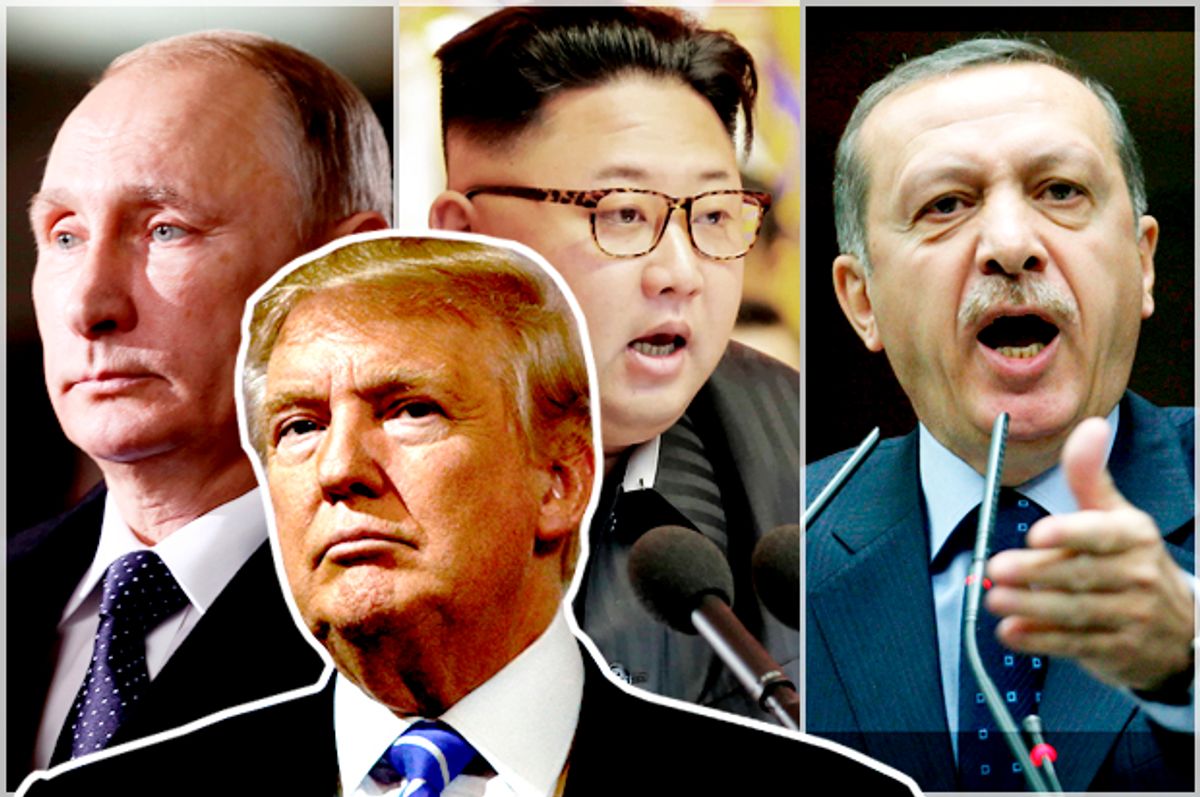 I don't think there's much doubt that President Donald Trump is a very lucky man. You don't fail up the way he has without a surfeit of good fortune (or without making a deal with the devil.) He inherited a fortune, and as much as he tried to lose it all he only ended up making more money.

Now he's the president of the most powerful nation on Earth, and the first six weeks of his presidency have shown us that his good luck is holding. Trump is his own worst enemy, stepping on good press with tantrums and gaffes. His obvious unfitness and lack of preparation for the job becomes clearer every day. Somehow, something always intervenes to save him.

We don't know what will happen with what Breitbart has dubbed "DeepStateGate." The latest WikiLeaks publication — of secret CIA spying tools — is morphing into a Bizarro World scandal in which the question of the hacking of a presidential campaign and possible connections between the president's men and shadowy Russians is now about former President Barack Obama running a clandestine CIA "false flag" operation to pin the hacking on the Russians and implicate Trump.

Congressional investigations will now perhaps include both the Russian hacking and possible Obama wiretapping, which is another lucky break for Trump. Republicans run those committees and will be happy to flog whatever storyline will help their president.

This raises the question of whether people should get their hopes up about the Russian scandal revealing something impeachable. Of course, there is enough evidence to investigate. A foreign government's interfering with a democratic country's election is a big problem. (And yes, I know the U.S. has done this as well. I think that's a big problem, too.)

But in my view investigators should devote as much time and energy as possible into following the money, since the conflicts of interest in Trump's business career are unknown and he refuses to be even slightly transparent about his financial dealings anywhere in the world, including Russia. In that regard, the Russian connection is compelling, independent of any collusion with the Putin government before the election.

For instance, Trump has said repeatedly he has no business in Russia but his son Donald Jr. gave an interview in 2008 that has been quoted widely and understood to mean that the Trumps have a lot of business in Russia. He talked about how difficult the business practices are there and how you can never be sure if you're going to get your money back.

The quote that's made the rounds is this: "Russians make up a pretty disproportionate cross-section of a lot of our assets."

But that's truncated. This is the whole quote:

And in terms of high-end product influx into the US, Russians make up a pretty disproportionate cross-section of a lot of our assets; say, in Dubai, and certainly with our project in SoHo and anywhere in New York. We see a lot of money pouring in from Russia. There's indeed a lot of money coming for new-builds and resale reflecting a trend in the Russian economy and, of course, the weak dollar versus the ruble.

In other words, when he said that Russians make up a disproportionate cross section of their assets, he wasn't talking about assets in Russia; he was talking about Russians investing in Trump properties in the U.S.

There may no direct espionage or collusion with Vladimir Putin that is likely to lead to impeachment. But the issue of corruption and conflict of interest is ripe for investigation and the Russian connection may lead to Trump being forced to release more information about his holdings. Remember: Suspicious email server management was not the original purpose of the Benghazi investigation either. But it led to the FBI director's tilting the election toward Donald Trump. So you just never know what might happen.

Anyway, it's really not necessary to believe that Trump is under Putin's thumb to be concerned about Trump's weird affection toward the Russian president. It seems strange for a man like Trump to be so dewy-eyed about an adversary, which is one of the main reasons that people are suspicious. But the fact is that Trump has long admired strongman leadership.

His worship of the Gens. George Patton and Douglas MacArthur, his compliments to North Korea's Kim Jong Un for his ability despite his youth to "take out his rivals," his kudos to the Chinese government for being "strong" in perpetrating the Tiananmen Square massacre, and even his alleged compliments to the murderous President Rodrigo Duterte in the Philippines are all examples of his admiration for authoritarian leaders. In the revised history of Trump's supposed opposition to the Iraq war, he claimed it was because Saddam was a tough guy who knew how to fight terrorists. Trump seems to have a similar respect for Syria's Bashar Assad, whom he called "much tougher and much smarter" than former President Barack Obama.

But there's nobody over whom he's been more moonstruck than Putin. In a 2007 appearance on Larry King's CNN show Trump slammed George W. Bush hard, in contrast to the man he believed was showing great leadership: “Whether you like him or don’t like him,” Putin's doing “a great job in rebuilding the image of Russia and also rebuilding Russia period,” Trump said. In 2008 Trump told a Russian magazine, "I really like Vladimir Putin. I respect him. He does his job really well. Much better than our Bush.”

A few years later he told CNBC that Putin's New York Times op-ed was “tough and amazingly well-written,” a “masterpiece for Russia and a disaster for the U.S.," and it made Obama look like “a schoolchild.” He went on and on, culminating with a paean to Putin's grand ambition: "He really becomes with this letter, almost the world leader. . . . He really looks like he wants to take over the world." Trump, of course, meant that in a good way.

Whether it turns out that there were back-channel deals with oligarchs, blackmail or collusion with the Russian government, our fundamental problem is that this country just elected a man who worships authoritarian strongmen. Throughout the 2016 campaign his "Make America great again" riff was used in service of a message of "toughness" and "strength," and it brought forth huge cheers from his audience. What that means is that the millions of Americans who voted for him want an authoritarian strongman, too.