To the "antifa" movement, cowardly liberals are nearly as bad as Donald Trump and the white nationalist right 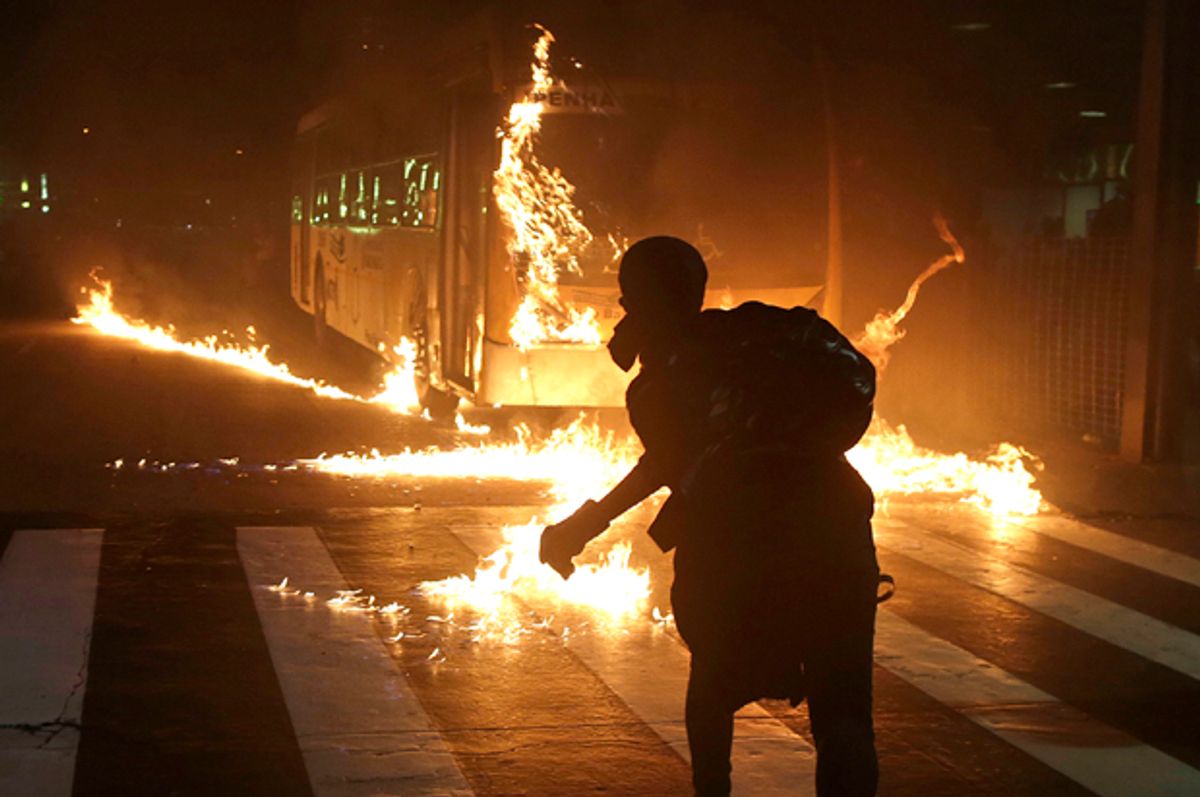 Since the election of Donald Trump as president, liberals and leftists have been discussing how to best respond to American conservatism’s transformation from a shopworn, Cold War, anti-government philosophy into something else.

To the anarchists and socialists who consider themselves part of the global “antifa” movement (an abbreviation for "anti-fascist"), the transition currently taking place on the right is all too familiar. The rise of the alt-right and white nationalism within the U.S. is something the mainstream left doesn't take seriously enough, they say, even as many Democrats compare Donald Trump to Adolf Hitler.

If it is true that the civic nationalism of Trump and his top strategist Steve Bannon are helping to lay the groundwork for a more radical right — intentionally or otherwise — then their self-described opponents on the left need to do more than wear safety pins and post Facebook denunciations of the president they didn’t vote for say the antifa advocates.

As Natasha Lennard, a former staff writer for Salon, wrote earlier this year for the Nation that coming to such a realization is difficult for many people on the left. Despite their posture of desiring radical change, most leftists are actually conservative in a certain sense:

Liberals cling to institutions: They begged to no avail for faithless electors, they see "evisceration" in a friendly late-night talk-show debate, they put faith in investigations and justice with regards to Russian interference and business conflicts of interest. They grasp at hypotheticals about who could have won, were things not as they in fact are. For political subjects so tied to the mythos of Reason, it is liberals who now seem deranged.

Instead of merely talking among themselves about opposing racism, say the anti-fascists, leftists need to take direct action to make being a white nationalist as difficult as possible. That’s why many antifa proponents have concentrated their efforts on tactics such as targeting the financial means of support for websites they see as enabling or promoting fascist views; they have even engaged in acts of physical assault against members of the far right.

“Only by fighting and destroying fascism can we actually defeat it,” an anonymous member of the website It’s Going Down told Salon via email.

The antifas’ anonymity is one of several superficial characteristics they share with their bitter rivals on the alt-right. Another is that they take politics much more soberly than their less extreme counterparts do. For the antifas, understanding that white nationalists are deadly serious about instigating a “racial holy war” is the key to countering them.

“During the rise of the Nazi regime in Germany, while anarchists and communists were literally fighting the fascists in the streets, the liberals and social democrats attempted to debate the Nazis point for point in the halls of power,” the anonymous activist continued. “This did nothing, and also normalized the positions of the Nazis and also made them into legitimate positions.”

The center-left's desire for an open society is its critical weakness, members of a Nebraska-based antifa collective told Salon via email because viewpoints that want to deny all free speech cannot be allow to speak freely.

"Liberalism [has] proven itself unable to prevent the rise of fascism over and over again," the activists wrote. "By the time liberals are comfortable with cracking down on fascism, it’s almost always too late. Antifa wants to make sure that no roots can take hold; that every attempt to organize and recruit for the fascist agenda is physically confronted and shut down."

Beyond targeting far-right activists' financial means and showing up to physically confront them at their events, many antifa activists have made it their mission to expose the true identities of popular alt-right figures so they cannot hide behind pseudonyms. The Nebraska activists provided an example of this tactic in December when they exposed the identity of Cooper Ward, a University of Nebraska student who was outed as the co-host of a popular neo-Nazi podcast. He quit the podcast program after being identified and hasn't returned.

Building a fanbase through overt racism has become much easier in the eyes of some antifa radicals, thanks in part to the mainstream media, several of the leftist activists told Salon.

"There is nothing 'objective' about writing [an] article about alt-right neo-nazis without including perspectives of their ideological opposites," argued the Nebraska activists. "We have noticed a marked lack of Antifa views in the mainstream media; we are denied a voice while they are elevated and made to seem mainstream."

That alleged refusal to permit the antifa voice to be heard within mainstream journalism pieces about the alt-right is indicative of a systemic bias by the press, It's Going Down wrote:

The world the Alt-Right wants is not that much different from the one we live in now, just one where the class, gender, and racial divisions are more crystallized.

Anarchists, who fight for a world where power is horizontally organized and political power is taken out of the hands of a centralized State and decentralized into human communities, where people don't work for wages but instead human labor is put towards need, and where industrial production is destroyed in favor of sustainability — is such a radical vision, and one that truly seeks to liberate all poor and working-people from the sinking Titanic that we now currently inhabit, most journalists don't want to touch it.

Antifa activists also take issue with liberals who think that letting people with racist or anti-Semitic views state them publicly somehow serves as a method of relieving societal pressures. Instead, as an anonymous essayist on the anarchist website CrimethInc wrote, such expressions merely increase the reach and influence of the far right:

Fascists are only attempting to express their views “peacefully” in order to lay the groundwork for violent activity. Because fascists require a veneer of social legitimacy to be able to carry out their program, giving them a platform to speak opens the door to their being able to do physical harm to people. Public speech promoting ideologies of hate, whether or not you consider it violent on its own, always complements and correlates with violent actions. By affiliating themselves with movements and ideologies based on oppression and genocide, fascists show their intention to carry on these legacies of violence — but only if they can develop a base of support.

The antifa activists' brutal approach to politics has earned them no love from many liberal and leftist quarters. Even Occupy.com has featured a highly critical essay calling the anonymous activists "a devolution in the philosophy of the left."

Radical and even violent action against the far right probably does alienate some people, antifa activists are quick to admit, but direct street action also attracts support in ways that political speechifying or angry letters to the editor simply cannot, they say.

It is certainly true that more extreme supporters of the Black Lives Matter movement have made many right-wingers more antagonistic toward police reform advocates. And mainstream Democratic and Republican hierarchies were completely ignoring the issue before fires began burning in Ferguson, Missouri, and Baltimore.

An anonymous essayist explored this point in detail for It's Going Down late last year:

Liberals and much of the Left claim that confrontational tactics hurt us more than they help, from breaking windows to blocking streets. But in reality, each and every time this plays out in our communities, it is simply not the case. In fact, confrontation and disruption, in other words: physically fighting, brings more people in than sign holding or writing letters to the editor ever did. If anything, the wet blanket and attempts to control things by protest managers and liberals kills social movements, not combative actions which can be disruptive and at times violent.

We see this playing out in every social struggle and movement. The riots, blockades, and clashes with the police in Occupy Oakland grew the size and scale of the movement, and were themselves informed by the Oscar Grant riots and student occupations of several years prior.

The Ferguson Insurrection inspired youth across the country and led to other uprisings and rebellions which pulled in tens of thousands. Despite “leaders” within the Black Lives Matter movement attempting to endorse the Democrats, channel the movement back into politics, and reduce it to simple reforms, the movement continues to evolve and remain combative and disruptive over a period of several years. …

Liberals and Leftists claim that confrontational actions scare away people from getting involved. But we find the opposite to be true. When people see a struggle is real; when there is skin in the game, something to fight for, and people are putting their bodies on the line, they often come out in droves. It is symbolic and legalistic protest which is pointless and doesn’t work and ends up turning many people away.

By definition, the antifa arguments are both radical and controversial. The unanswered question is whether liberals, moderates and others who oppose the radical right can learn something from the antifa activists' confrontational stance. Or will the violent tactics they advocate only worsen tensions in a divided society and beget more violence?