Republicans loot the palace: GOP's plan to govern looks a lot like the way it "rebuilt" Iraq 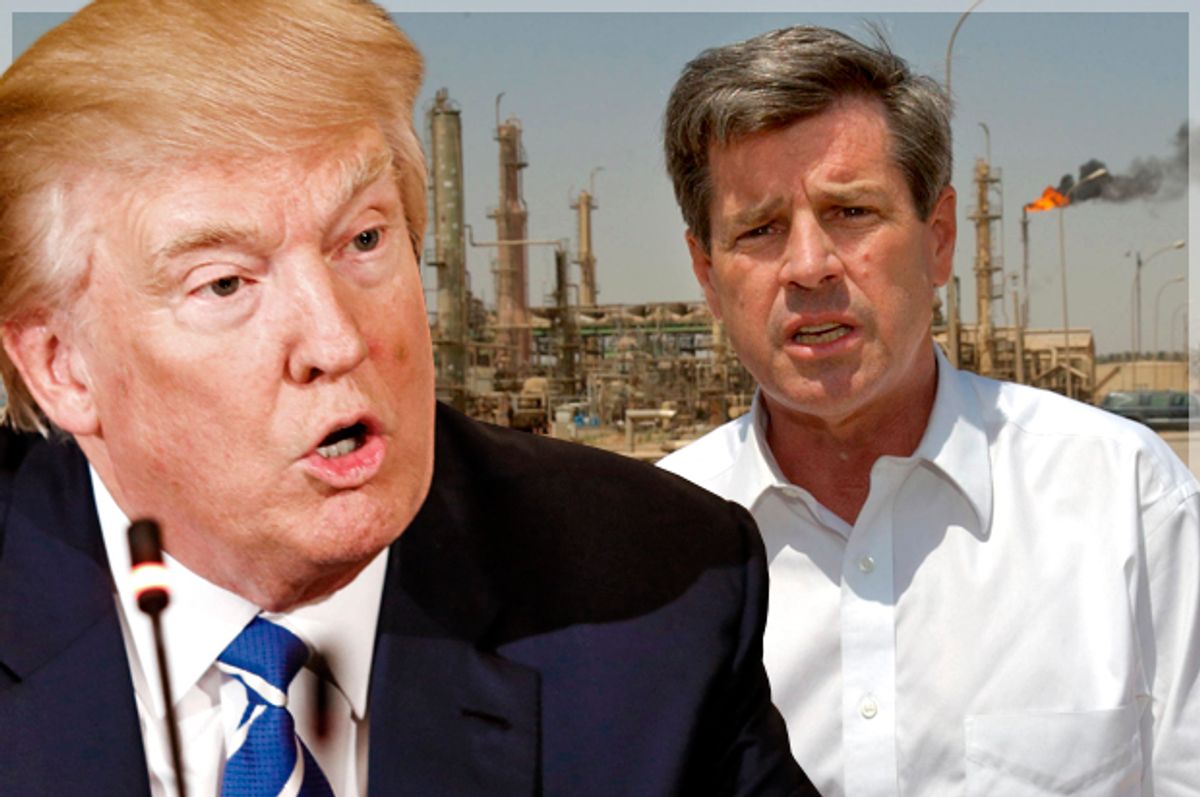 This week's rollout of House Speaker Paul Ryan's "repeal and replace" Obamacare bill is an excellent reminder of what the country would look like if any Republican other than Donald Trump had won the presidency — not that different. We can now say for sure that the problem isn't just that the party nominated an crude, unprepared conman for the top job. The problem is that the party itself is a big sloppy hot mess. How could we have forgotten?

Like the old Republican cry of "tort reform," which nobody really understood, "repeal Obamacare" became a slogan that would evoke lusty cheers from an audience of partisans. If you asked any of them what this meant in practice, not one could tell you. Not that it mattered. The whole issue was political kabuki once the Affordable Care Act was rolled out and tens of millions of people signed up for plans and the Republicans knew it. Their elected legislators just kept voting for repeals they knew would never be enacted and screaming their empty slogan at rallies to keep their base excited.

When Trump unexpectedly won the election, after having promised that he, too, would "repeal Obamacare" and "replace it with something terrific" (which he promised would happen immediately, cover everyone and be much cheaper and much better), Republicans were suddenly stuck with a problem that had no solution. Now that he's president, Trump has discovered that "nobody knew health care could be so complicated." Based on what we're seeing from the GOP Congress, he's actually right about that.

I won't go into all the machinations here because they're changing by the hour. First Trump's on board and then he's not and then he's back on. (He's been saying for weeks that he would really prefer to let Obamacare fail —  sabotage it from the executive branch — and then blame the Democrats.) He does not want people to call this monstrosity "Trumpcare" but everyone is doing so anyway.

Ryan is holding televised PowerPoint presentations that would be equally incomprehensible but more entertaining if he used some puppets to help him explain it, as Glenn Beck used to do on his old Fox News show to reveal the "Soros conspiracy." The Freedom Caucus is rebelling, the entire medical community is freaking out, conservative senators are telling Ryan to back off and start over and the White House is still trying to figure out where the light switches are.

In other words, they have absolutely no idea what they're doing. Surprise! You thought it was just Trump, didn't you?

It's been a while since Republicans had to do anything but run their mouths and throw sand in the government's gears. Obstructing is much easier than governing. But as they were honing their skills as the opposition over these last few years, they also empowered a group of amateurs, fanatics and flimflam artists to rise to positions of power in the party. In their hands, opposition was largely a matter of theatrics, playing to the crowd. With the help of the burgeoning right-wing media, vastly wealthy benefactors, a well-established but radicalized ideological infrastructure and an energized grassroots, these Republicans won office for a period of years by promising a conservative nirvana with numbers that never added up. The GOP was ripe for a snake oil salesman like Donald Trump.

I mentioned in passing in a Salon piece some time ago that during the Trump transition all the Republicans were seemingly sending their résumés to the Heritage Foundation, which was acting as the virtual human resources department for the new White House. It reminded me that even before the Obama years, when people still extolled the Republicans as the "grown-ups," there were strong warning signs that the party was becoming so rigidly partisan that it was losing basic expertise and competence.

The most vivid example of that was the Bush administration's failed attempt at building a Jeffersonian democracy in Iraq after having trashed the place. As chronicled in Rajiv Chandrasekaran's book “Imperial Life in the Emerald City,” back then young conservatives who had posted their résumés with Heritage were hired by the Pentagon for entry-level jobs in Baghdad. They found themselves running multimillion-dollar programs and making decisions supposedly designed to rebuild a market society for a country of millions of people. The place was a shambles, with senior people who might have known what they were doing fleeing in horror at the mismanagement and lack of direction from above and the infighting and turf wars throughout the operation.

This week's ProPublica blockbuster exposé of the Trump administration's "beachhead" operation suggests that Republicans didn't learn a thing from that disastrous experience. Once again a GOP administration has hired unqualified ideologues and inexperienced neophytes for staff jobs that should be done by professionals. Only this time, it's not the Coalition Provisional Authority of Iraq under the catastrophic leadership of appointed "viceroy" Paul Bremer. This time it's the United States government, under the leadership of a failed businessman who lucked into the presidency with a lot of outside help.

ProPublica's list of those hired, which its reporters culled from lists gathered from Freedom of Information requests, runs into the hundreds of people, including:

A Trump campaign aide who argues that Democrats committed “ethnic cleansing” in a plot to “liquidate” the white working class. A former reality show contestant whose study of societal collapse inspired him to invent a bow-and-arrow-cum-survivalist multi-tool. A pair of healthcare industry lobbyists. A lobbyist for defense contractors. An “evangelist” and lobbyist for Palantir, the Silicon Valley company with close ties to intelligence agencies. And a New Hampshire Trump supporter who has only recently graduated from high school.

And the administration is now crawling with lobbyists, at least 36 of them at last count, despite Trump's promises to "drain the swamp." Apparently he drained it and turned it into the executive branch's swimming pool. But then his credo is "to the victors belong the spoils," and that evidently doesn't just apply to stealing resources from foreign countries. This is why a corrupt political machine is called a "spoils system."

So we have yet another Republican president throwing Bush-league amateurs into jobs that are over their heads, along with a Republican Congress full of people who have either been getting by on an unearned reputation for seriousness or whose definition of legislating is to hold their breath until they turn blue and then declare victory.

If you liked the way the George W. Bush administration handled running Iraq in the first years of the war, you're going to love how the Trump administration and the GOP Congress runs America. It seems that's the only model the Republican Party knows anymore.