With age, Judd Apatow’s series "Love" on Netflix finds itself 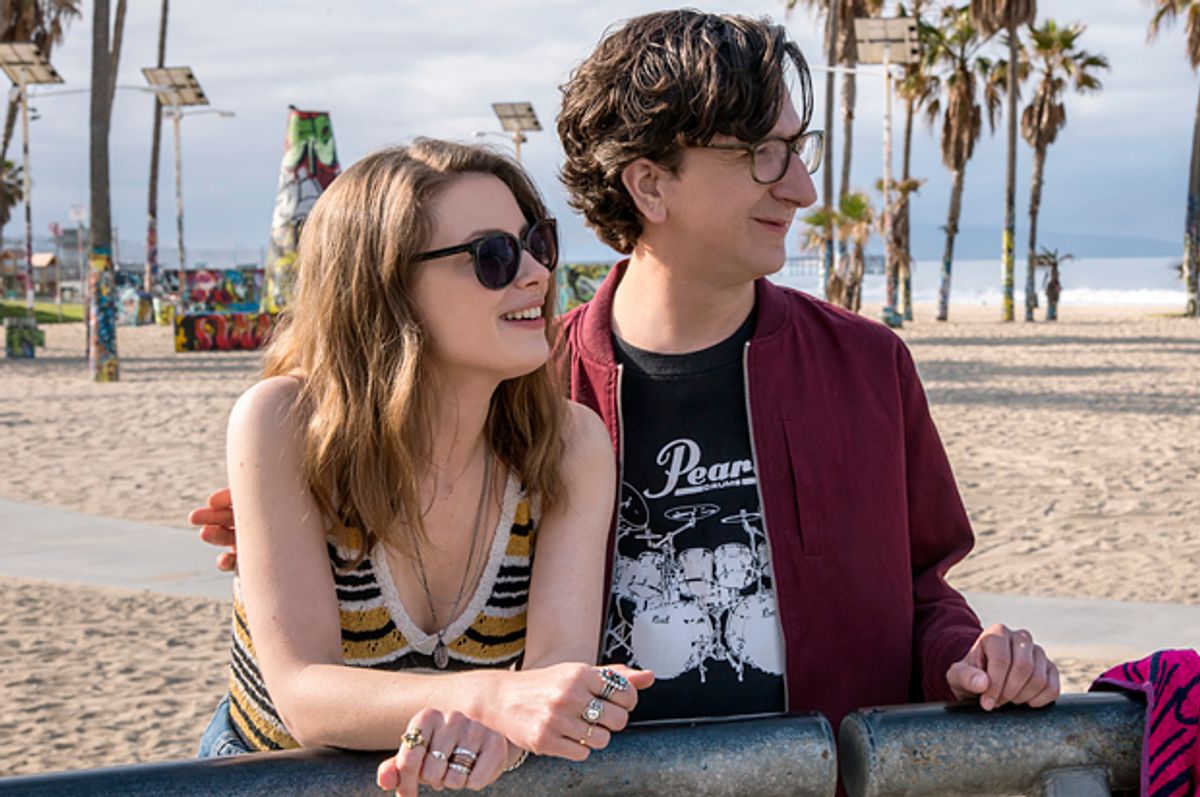 Even if you have never seen an episode of Judd Apatow, Paul Rust and Lesley Arfin’s Netflix series “Love” — whose second season was dumped on Netflix at 12 a.m. on Friday — you can probably infer what it is about and what beats it hits. As the show’s title suggests, it is a revisionist Western about a cowboy who dreams about leaving the squalid Montana plains for life in outer space, alone with his steed Shant. OK, kidding; it’s a modern will-they-or-won’t-they romantic comedy about heterosexual white yuppies in Los Angeles. As Apatow’s involvement suggests, the show aims to subvert the conventions of the traditional rom-com with juvenile humor, drug use and messy characters.

“Love” was born out of a bit of idea nooky. Rust had an idea for a movie about a couple on the other side of therapy wanting to make their relationship work. Apatow had an idea for an anti-“How I Met Your Mother” — a show whose audience knows that the couple won’t end up together. The two writers met somewhere between Rust’s sanguinity and Apatow’s cynicism — essentially, the territory of all Apatow productions.

In the show’s first episode, the protagonists, Gus Cruikshank (Paul Rust) and Mickey Dobbs (Gillian Jacobs), are brought together through a very Apatowian adventure. They hotbox Mickey’s car, pick up fast food and accidentally drive to Gus’s ex’s house. While there, Gus picks up his things, only to discard most of them at Mickey’s egging. He throws old DVD after old DVD out the window of her car, at once demonstrating the laxative effect she has on him and declaring that the show will discard the tropes of films like “When Harry Met Sally,” which is one of the films he discards.

The problem is that “When Harry Met Sally” is a straw man. In 2017, Apatow’s oeuvre is the rom-com standard. There’s no space for Apatow to subvert rom-com tropes without self-cannibalizing. He doesn’t do that and the show fails at blazing new ground.

But that doesn’t mean the show fails. Rather, it is utterly enjoyable. Its jokes are tight, the characters are well-crafted, and it has something to say. I often have the sense that “Love” uses love as a Trojan horse to comment on the modern way that adolescence is becoming eternal.

Apatow is in love with late-stage youth. His breakout work, the 1999 NBC sitcom “Freaks and Geeks,” was set at a high school. Since then the protagonists of his films and television shows have notoriously been man-children: grown men (and a couple of women) with stunted frontal lobes, who are forever stuck in high school or sometimes just beyond.

Along the child to (wo)man spectrum, the protagonists of the Netflix show “Love,” which Apatow executive produces, are closer to Peter Bretter than McLovin. They are employed, their apartments are tidy, and they don’t fart on their friends’ pillows. But like almost all Apatow characters, Gus and Mickey are both mature behind their years.

They are both in their early 30s. But Gus has a 17-year-old’s pretensions. He works as a tutor at a campy television show about witches but wants to be a writer. When the show he works for buys a script he wrote on spec, he is invited into the writer’s room. But he flubs what could be his big break by throwing a tantrum about how the good-but-not great show could aspire to be more like “The Sopranos.” Mickey is a mess through and through. She’s an addict who lacks impulse control and empathy.

The characters’ flaws and the way their traits contrast — Gus is the nebbish nice guy; Mickey is the wild heartbreaker — is where the show finds most of its drama and comedy. If Gus and Mickey were more well-adjusted, the show would be boring. And yet, the gulf between the age they are and the age they act can feel curious.

Gus and Mickey could just as easily be in their early 20s as their early 30s. If the show were to turn back their clocks eight years, the writers wouldn’t have to change a detail: their casual attire, the stage Gus and Mickey are at in their respective careers, how they spend their leisure time. While I watched a first-season episode about the two going to a house party, my roommate asked me how old the characters are supposed to be. When I said they are in their early 30s, he asked, “Do 30-year-olds still go to parties like that?”

Many do, of course. And none of these details disqualifies Gus and Mickey from being in their early 30s. But the amalgamation of youthful traits and behaviors serves as a comment on the modern state of age. The show argues that 30 is the new 20. But what that means is not just that humans are living longer, our culture is becoming less formal and people are settling down later, but that people — particularly those of privilege — are taking a longer time to find themselves.

The second season of “Love” covers some of the same territory as the first season, including love, aging, and addiction. And just as the first season began with a drug-fueled adventure, the second season’s fourth episode is centered around a mind-altered jaunt. In an effort to commit to sobriety, Mickey throws out her vast supply of drugs — with one exception. Rather than let a good batch of mushrooms go to waste, she encourages her roommate Bertie (Claudia O'Doherty), Bertie’s boyfriend Randy (Mike Mitchell), and Gus to take them.

The episode is about their trip, and it is the funniest episode of the series to date. Mitchell as Randy is a revelation. After speaking maybe 10 lines in the entire first season, he figures prominently into the episode. Suddenly, “Love” is a show with a group at its center, and Randy is part of the group. When a wild animal visits Mickey and Bertie’s backyard, Randy falls under its spell and he leads them on a quest to find the animal and, ultimately, spiritual answers.

Without giving too much away, the group discovers that they’re searching for domesticity. The irony is that the path to domesticity and conventional adulthood is littered with drugs and mistakes. It’s an irony that shows up in much of Apatow’s work. Love is as much a feeling as it is a status. The characters want both without sacrificing either. But aging, like love, is about sacrifice.