How the U.S. created a human rights disaster in Honduras — and how it can be stopped

A new bill backed by the family of Berta Cáceres aims to choke off aid to the country's military junta. 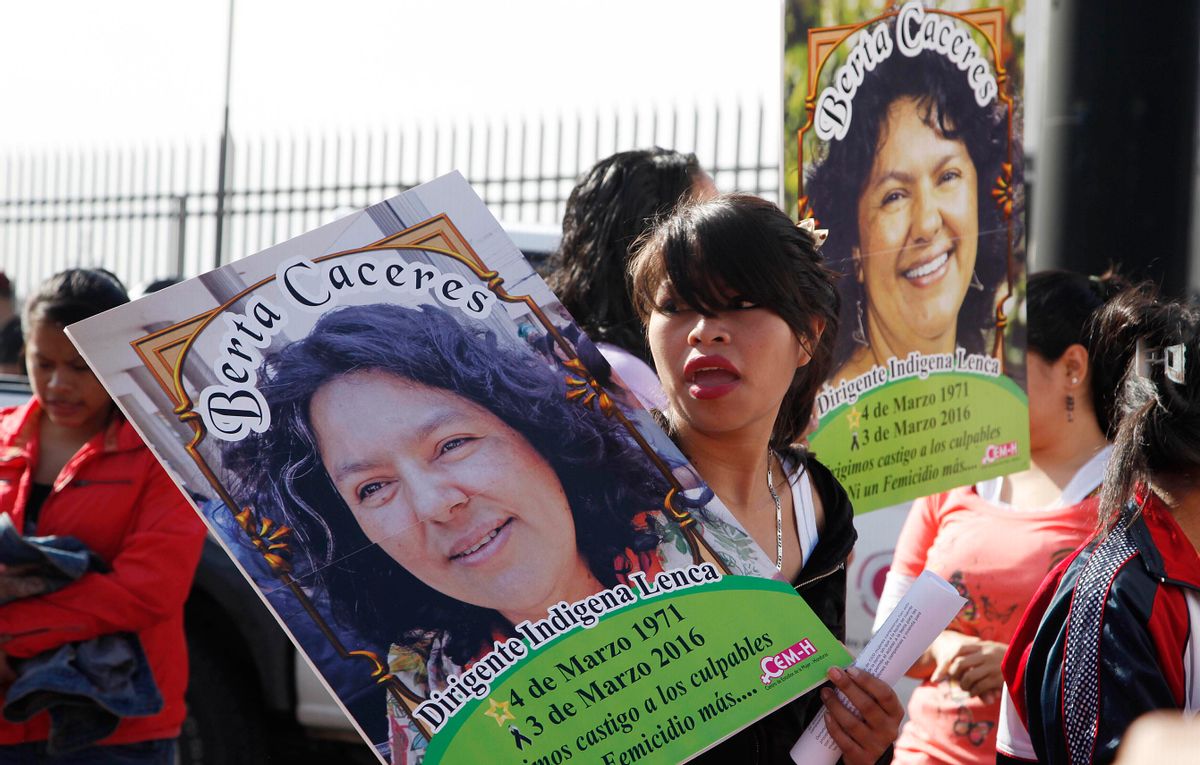 Women carry images of slain environmental activist Berta Caceres during the commemoration of International Women's Day in Tegucigalpa, Honduras, Tuesday, March 8, 2016. Caceres, a Lenca Indian activist who won the 2015 Goldman Environmental Prize for her role in fighting a dam project was killed by unknown assailants on March 3, 2016. She had previously complained of receiving death threats from police, soldiers and local landowners because of her work. (AP Photo/Fernando Antonio) (AP)
--

One year after indigenous Lenca social movement leader, Berta Cáceres, was assassinated, her family is calling on the U.S. government to stop bankrolling violent repression targeting human rights and environmental defenders who are following in her footsteps.

A co-founder of the National Council of Popular and Indigenous Organizations of Honduras (COPINH), Cáceres spearheaded a mass campaign against the proposed Agua Zarca hydroelectric dam project—an initiative fraught with human rights abuses, including the expropriation of indigenous land. She was a prominent opponent of the 2009 U.S.-backed military coup and was awarded the Goldman Environmental Prize in 2015 for her grassroots campaigning.

In a letter dated March 2 and viewed by AlterNet, Cáceres’ family members call on Rep. Norma Torres (D-CA)—the first Central American to serve in Congress—to support the Berta Cáceres Human Rights in Honduras Act. Introduced by Rep. Henry Johnson (D-GA), the proposed legislation urges the suspension of “United States security assistance with Honduras until such time as human rights violations by Honduran security forces cease and their perpetrators are brought to justice.”

According to a report released by Global Witness in January 2017, Honduras is the “deadliest country in the world for environmental activism.” The organization found that more than 120 people have been killed for organizing since 2010 alone. “The victims were ordinary people who took a stand against dams, mines, logging or agriculture on their land—murdered by state forces, security guards or hired assassins,” the reports states. “Countless others have been threatened, attacked or imprisoned.”

“A government that fails to protect its citizens and whose security forces are implicated in attacks and killings of activists should not be receiving security funding and training from the U.S. government,” states the letter, signed “The Family of Berta Cáceres.”

A report published in the Guardian on February 28 determined that leaked court documents “raise concerns” that Cáceres’ murder was plotted out by “military intelligence specialists linked to the country’s U.S.–trained special forces.” According to journalist Nina Lakhani, the military records and court documents of the eight men arrested for the killing reveal that two of the suspects—both retired military officers—were trained in the United States. Another suspect was a former special forces sniper who prosecutors believe “may also have worked as an informant for military intelligence after leaving the army in 2013,” writes Lakhani.

Honduran soldier First Sergeant Rodrigo Cruz testified to seeing Cáceres’ name on a hit list circulated months ahead of her assassination to two U.S.-trained, special-forces units of the Honduran military, according to a Guardian report in 2016.

“For many Hondurans and friends of Honduras, the killing of Berta—one of the country’s most beloved and high-profile activists—was the straw that broke the camel’s back,” her family wrote. “Since 2009, hundreds of social leaders have been murdered in Honduras, often with the alleged complicity of state forces. The vast majority of these killings are never investigated, and those responsible are never brought to justice.”

“In addition, the government has consistently failed to respect basic indigenous land rights as it is required to do under its international treaty obligations,” the letter continues.

Berta’s nephew, Silvio Carrillo, was born in the U.S. because his parents were forced to flee persecution in Guatemala, and he now lives in Oakland, California where he works as a freelance journalist. He told AlterNet, “I wish I could speak positively and say that her death has brought about change, but it really hasn’t. It’s made people more conscious about just how evil this administration is. It’s also made me and my family a lot more conscious of how corrupt and how sad the situation is.”

According to Carrillo, the U.S. is complicit in the country's violent repression. “They legitimized the 2009 military coup, whether Obama or Clinton wanted to call it that,” he said. “The government started selling off indigenous land that did not belong to them for environmental projects. This was all with support from the U.S., because the U.S. keeps its military installations there and trains with Honduran security forces, contributing to the instability of the country.”

The 2017 Global Witness report notes that the United States is the largest donor of aid to Honduras and a principal player in international financial institutions, including “the International Finance Corporation (IFC) and the Inter-American Development Bank (IDB), which are both financing hydroelectric dams and their infrastructure in Honduras.” In 2016, the U.S. funneled $98.3 million in bilateral aid to Honduras, and $750 million to the “Alliance for Prosperity Plan” in Central America. “A lack of transparency makes it unclear how this aid is spent and how much is channeled through IFIs,” the report notes. “What is clear is that U.S. contributions to the Alliance for Prosperity vastly increase security aid to Honduras.” The report is able to pinpoint at least $18 million in U.S. aid that was handed to Honduran police and military “in spite of their abuse against activists.”

In addition, Honduras offers a key foothold for the U.S. military, which has hundreds of troops deployed to the Soto Cano Air Base that it shares with the Honduran military. A report posted on the U.S. Army's website in 2015, notes that Green Berets from the 7th Special Forces Group (Airborne) have recently trained notorious Honduran "intelligence and special security response groups units” known as “Tigres.” According to activists, Tigre squads operating in the Bajo Aguan region are unleashing threats, intimidation and violence against environmental and human rights defenders.

The Civic Council of Popular and Indigenous organizations of Honduras (COPINH), whose members have been targeted and killed following Cáceres’ assassination, has repeatedly blastedthe U.S. for its role in fueling the country’s human rights crisis. Now, the group is organizing demonstrations and vigils to mark the one-year anniversary of the killing, alongside Berta’s family and the Black Fraternal Organization of Honduras (OFRANEH).”

Alexandria Lyons, an Albuquerque-based member of the Southwest Organizing Project, traveled to Honduras as part of the Grassroots International solidarity delegation—one of two international delegations. “As a feminist organizer in my own community in Albuquerque, it is important to honor and remember revolutionaries such as Berta,” she told AlterNet. “Not just today or while here in Honduras, but to remember her and her message always.”

“The consistent message from all of the movement leaders we have connected with is that the movement here in Honduras is unifying and growing constantly,” Jaron Browne, an Oakland-based organizer with the Grassroots Global Justice Alliance, told AlterNet from Honduras. “They are also facing tremendous repression. The government is attempting to circumvent international law that protects the rights of Indigenous peoples, proposing new laws that would criminalize all public protest and label social movements as terrorists. International solidarity between our frontline movements is needed now more than ever.”