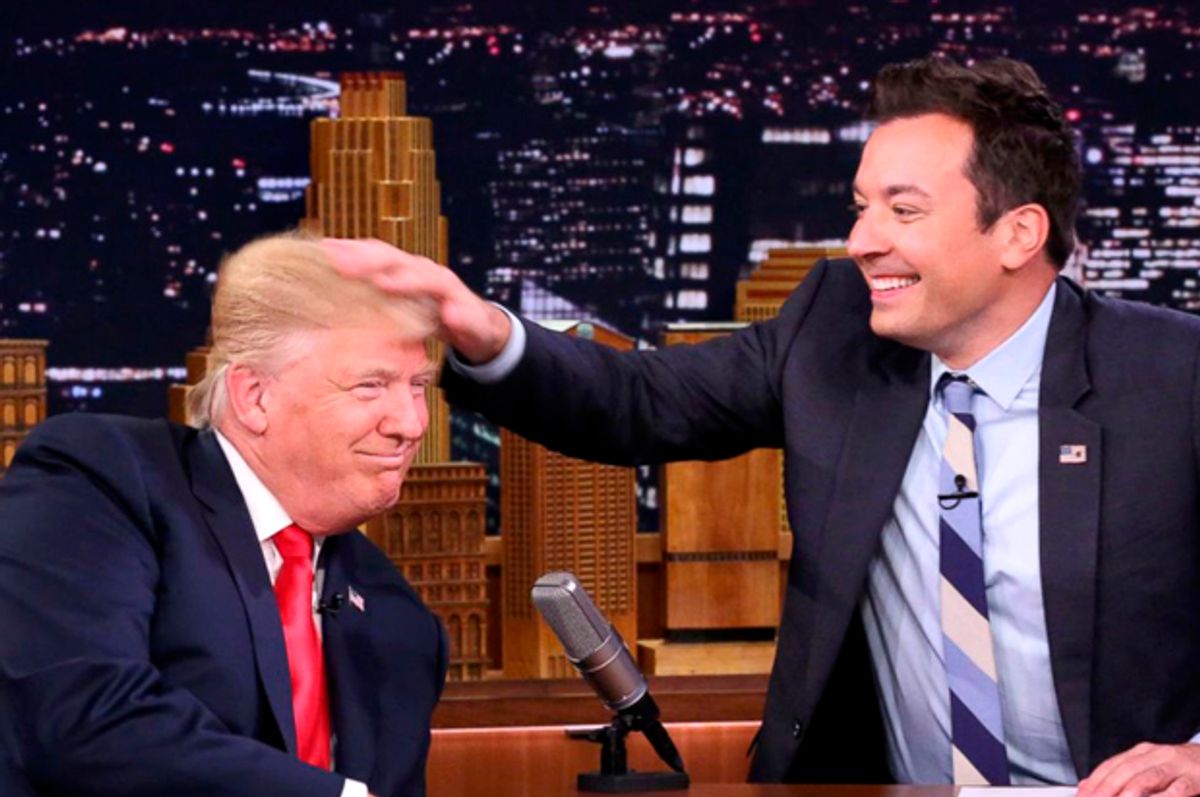 When historians look back at the factors that influenced the 2016 presidential election, chances are Jimmy Fallon won’t come up. Back in September, at the time of Fallon’s iconic Trump hair-tousling, the popular narrative was that the gesture shamelessly normalized Trump. But time yields clearer perspective: It was not Fallon’s hand that cleaned Trump’s grassy head, but Trump’s head that dirtied Fallon’s hand.

For the past five weeks, Fallon, the once untouchable king of late night, has been losing the ratings battle to Stephen Colbert’s “Late Show.” The hair-tousling took place five months ago, so it didn’t directly cause the power shift. But the moment marked an inflection point in the popular conception of Fallon: The nice-guy goofball became a smarmy goofball, ignorant to the weight of the moment.

Now that Trump is shaping each day’s news with both scuttlebutt and momentous real-world actions, viewers are turning to Colbert to help make sense of it all. Fallon is none too happy about the swing. Page Six quoted a source saying that Fallon “freaks out over this. He has to be on top.” The source said that Fallon is recalibrating by trying to “figure out a way to get Trump [into his routine] because he’s too weak on Trump, and viewers are going elsewhere. [He’s been] uncomfortable talking about politics, and that’s not what the people want.”

To up his Trump content, Fallon has been leaning on his Trump impression. He has also incorporated a segment called “This Week in Words” — a remix of the week’s buzzwords — into his monologue. And he has been cracking his fair share of straight Trump jokes, too. He’s done all of it in his bubbly, bit-sized style. The humor is authentically Fallon. But the political perspectives are either missing or feel forced. Fallon doesn’t have a clear point of view, and his humor is rarely cutting.

It’s ironic that political commentary has become one of the chief roles of late night hosts. The traditional format is that of a light variety show; most of the hosts have backgrounds in improv and stand-up, not political satire. Part of the change can be attributed to the way Trump has brought showmanship to politics; in so doing, he has made politics prime entertainment, which has always been in the purview of late night. But the shift goes back further than Trump’s presidential run. David Letterman told Vulture that in the late ’90s Jon Stewart “made it so that not doing political stuff got to be the elephant in the room.”

Late night is a copycat business, but one in which success is heavily predicated upon external variables. David Letterman’s winking sarcasm was perfectly suited to the cynicism of the 1990s. Jimmy Fallon’s manic energy and buzzy bits capitalized on social media as a supplementary distribution system. And Stephen Colbert’s quick wit, sincerity and deep political insight have been the necessary ingredients in reacting to the daily deluge coming from Washington.

Each formal innovation has been met with imitation — but never to great effect. Late night is not immune to the first-mover advantage. And shows suffer when hosts stray from their strengths. Letterman, for instance, could not manufacture virality in his old age.

In Trump, Fallon faces a truly existential dilemma. To double down on playing flip cup with Kate Upton comes off as oblivious. To make content out of Trump comes off as insincere. The moment has put him in a bind that could last four years, eight years, or might be permanent.

It seems as if Fallon has chosen to respond by having his fun and his politics, too. To some extent, that’s what all the major network late night hosts have done — though Jimmy Kimmel has instituted “Trumpless Tuesdays.” The effects are multifold: a more informed public; a homogenous left-leaning reading of the news; and, perhaps, through the incessant joking, a cumulative deflation of the moment’s gravity.

All of these effects are heightened by the current cycle of coverage. Almost every news outlet — including stalwarts such as the New York Times, Washington Post and, yes, Salon — recaps the previous night in late night. These recaps, which in some cases focus on individual clips and provide little commentary, then make the rounds on social media.

The inundation feeds upon itself: The best Trump take gets the most news coverage, which necessitates more Trump coverage from late night shows. Fallon is a victim of the same machine he profited from for so long. He may not have been the one to let the genie out of the bottle, but he can’t put it back in, either.