The Prius of shoes is coming: Sneaker makers are finding new ways to reduce their carbon footprints

Sneakers have not been known for their sustainable manufacturing processes. That's changing fast 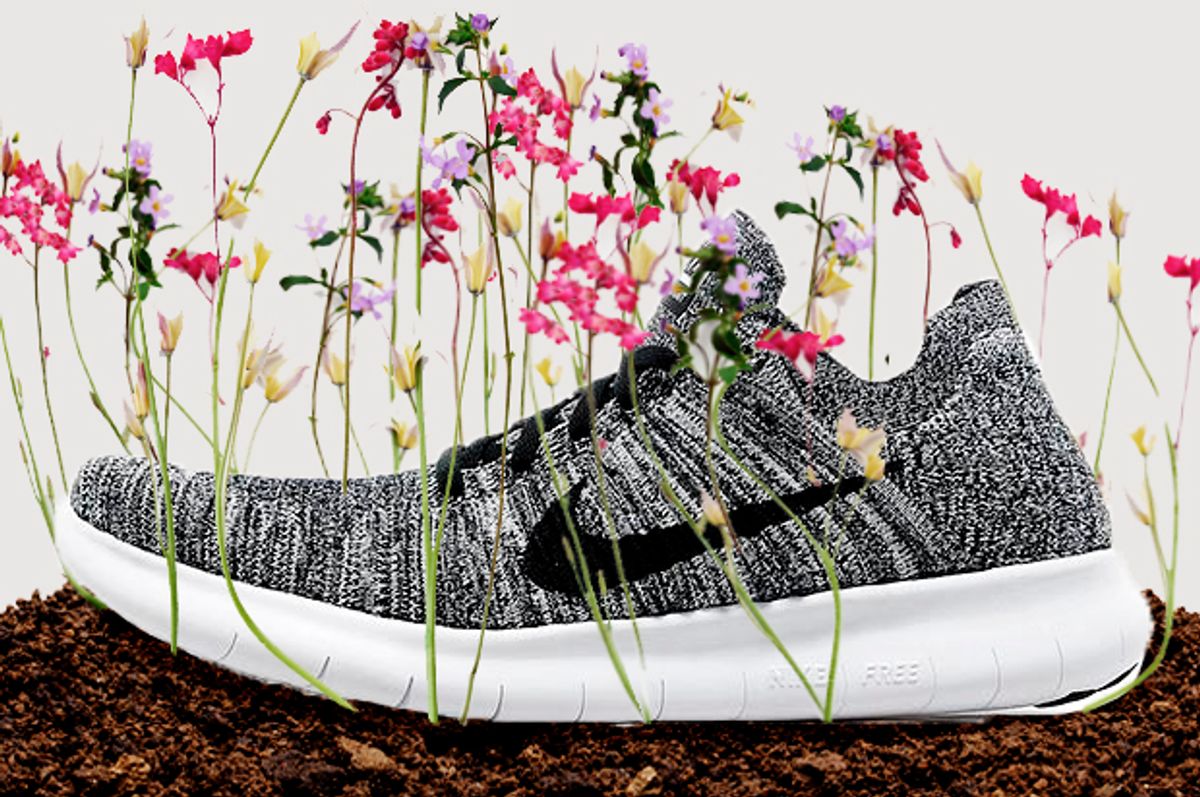 They’ve always been practical. And at least since Carrie Bradshaw fetishized Manolo Blahniks in the early Aughts, they’ve been aspirational. But shoes are becoming something much less likely: environmentally sustainable.

It’s not a label historically associated with the industry — far from it. An MIT study determined that making a typical pair of sneakers, a water- and energy-intensive process, results in 30 pounds of carbon dioxide emissions. Compare that with the 20 pounds you get from burning through a gallon of gasoline. Considering that 20 billion pairs of shoes are produced globally per year (a number that’s expected to double every 20 years for the foreseeable future), our kicks are a major culprit in the fight against climate change.

But fortunately for the planet, this industry is in the midst of an eco renaissance, and the race to be the most sustainable shoe company is on. With savvy consumers demanding environmental responsibility from brands (we’re increasingly turned off by footwear that take 1,000 years to break down in a landfill, leaching toxins into our groundwater all the while), it’s no longer enough for a pair of shoes to be comfortable or aesthetically pleasing -- they need to be earth-friendly.

Making this more feasible are innovations in style, like the knit shoe. Due to its one-piece construction, Nike’s FlyKnit technology has allowed the corporation to cut down on 3.5 million pounds of waste between 2012 and 2016.  Then there’s the 3-D printing of shoes, which is set to revolutionize the industry in 2017 by allowing for greater performance innovation while cutting back on waste and making the incorporation of biodegradable materials easier. And when it comes to the next-generation closet, biodegradable is the new black.

Take the work of the late Richard Wool, formerly a professor of chemical engineering at the University of Delaware, who developed a breathable material called Eco-leather made from biodegradable ingredients like flax, vegetable oil and chicken feathers (which chicken processing plants are eager to donate, rather than pay to trash). This unlikely mix is laminated using a technique developed by aerospace engineers, sans the toxic pollution of a traditional leather tannery. After Wool’s passing, the company was acquired by investors in the Czech Republic who are further developing the product.

“The entire lifecycle of a shoe -- from production to post-consumption disposal -- has big problems,” Huantian Cao, PhD, Co-director of the Sustainable Apparel Initiative at University of Delaware who worked with Wool on the Eco-leather project, told Salon. “But the industry is working intensively on addressing these issues.”

Putting talk into action is the Amsterdam-based company OAT Shoes, which sells footwear that can later be composted or planted. Made of hemp, cotton and other biodegradable materials, the shoes decompose approximately six months after being buried. And because of wildflower seed packets sewn into the tongues, they’re designed to bloom when planted (thankfully not before). Piccadilly Footwear out of Brazil, whose products are sold in 90 countries, also makes shoes you can plant, thanks to biodegradable materials like coconut fiber and water-based glue.

Other companies are making footwear out of non-biodegradable material that would otherwise clog the planet. San Francisco-based Rothy’s is grinding recycled water bottles and then combining them with recyclable foam into chic flats via 3D printing. According to Fast Company, the tech could soon be used to knit the shoes on demand to avoid overproduction.

As for the megabrands, many have made behind-the-scenes strides toward worthy goals for reducing carbon emissions, increasing environmental impact research, reducing hazardous chemical discharge down to zero, and incorporating ethical materials. Organizations like the Sustainable Apparel Coalition are making meeting these goals easier -- the SAC has developed the Higg Index, which allows a footwear company to measure its sustainability performance across the product lifecycle, from water and energy usage to transportation.

Among the splashier initiatives, Puma launched a line of shoes called InCycle made from a plastic that can be composted into humus; Sanuk sells sandals made from recycled yoga mats; and Adidas announced plans for producing 1 million running shoes this year, made from plastic retrieved from the ocean near the Maldives, with the end goal being to eliminate virgin plastic totally from the supply chain. One shoe equals 11 reused water bottles.

If these flagship moves sound gimmicky, you’re not wrong -- experts say it will take a much more holistic approach to truly revolutionize the industry. But shoes that bloom or incorporate your yoga mat do serve to ramp up sustainable competition between corporations and increase awareness among consumers, and that could lead to major change.

“When you look at the actions that have traditionally allowed people to showcase their sustainability and help others understand -- solar panels on a house or a Prius in the driveway -- that kind of thing can be powerful,” Jason Kibbey, CEO of SAC, told Salon. “And while this hasn’t translated to the apparel industry on a large scale yet, that could change. At some point we’ll see the Prius of footwear.”