Americans have Russians on their mind and nerves — again 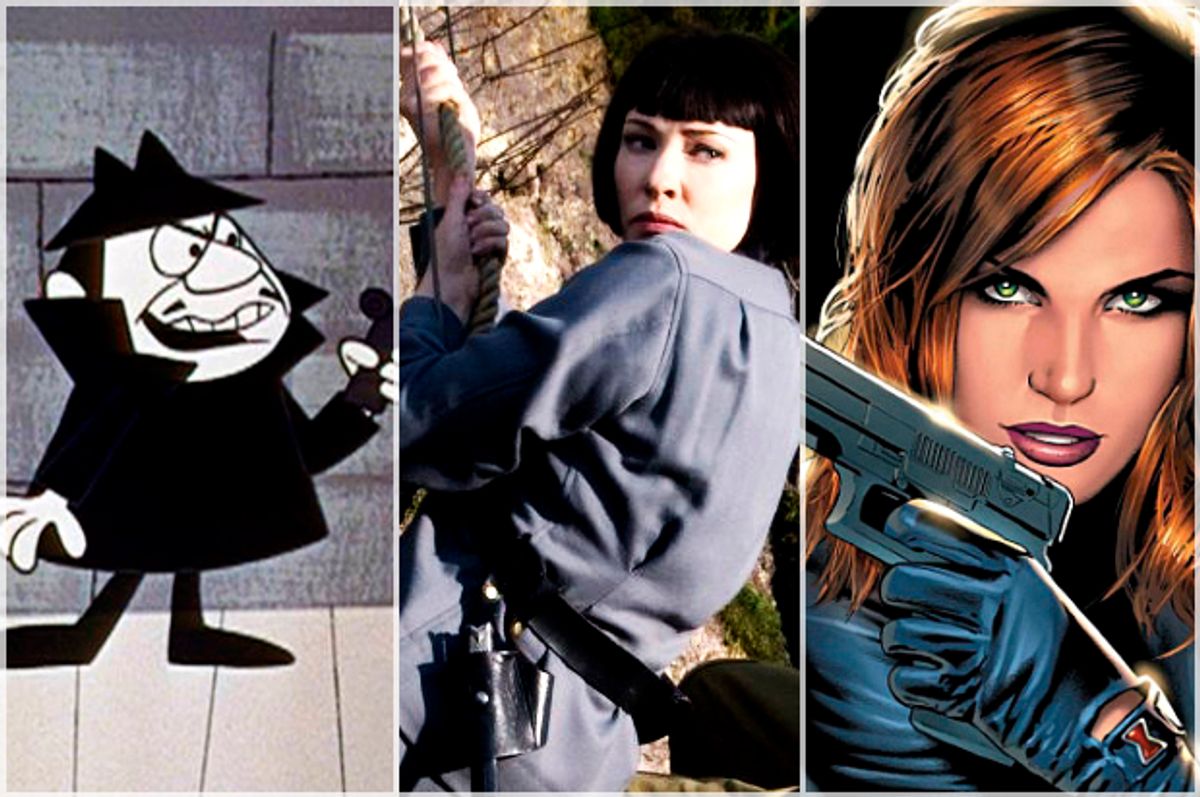 Many are obsessed with the Watergate-like scandal involving President Trump and his various stooges who were a tad cozy with Russian envoy Sergey Kislyak during the 2016 campaign. Others are just glad “The Americans” is back on FX. This twisty tale of subterfuge features a married KGB couple hiding in the DC suburbs, and it might be the best drama on TV — if not for Russiagate.

While the levels of intrigue and duplicity on “The Americans” and the front page are startling and engrossing, both feature an old trope: Russians as villains. In movies, TV, novels, comic books and other genres, the Russian villain has been a staple since the heyday of the Cold War. Some of these villains personified dread of nuclear horror. Others embodied hysterical fears of communism. Some simply provided tough-talking goons for the likes of Rambo or Hulk Hogan to clobber. When a story needed a baddie, the Russians were — and are — reliable and versatile.

With anxiety over Vladimir Putin, Sergey Kislyak, and the Trump administration’s ties to both continuing to rise, such villains may make a comeback beyond period shows like “The Americans.” But before we see what new Russian villains emerge, let’s pay our respects to a smattering of the old ones. We owe these fictional Cold Warriors a debt for the entertainment — much as we owe the Russian people an apology for the stereotypes. Sorry, folks. This is America: land of the free, not subtlety.

Ivan Koloff: One of the top wrestling stars of the 60s and 70s, Koloff — actually a Canadian man named Oreal Perras — was one of the most successful bad guys during the height of the Cold War. With his massive frame and nickname “The Russian Bear,” Koloff terrorized weak Americans and anyone else who got in his way. Koloff died recently, but the memories live on, especially of his 1971 defeat of Bruno Sammartino for the (as it was then called) WWWF title — ending an almost eight-year reign and leaving Madison Square Garden speechless. As a fake Russian, Perras was a real big deal.

Ivan Drago: Duh. Drago, the merciless pugilist from “Rocky IV,” is the Michael Jordan of Russian baddies, and there’s no LeBron James nipping at his heels.

Irina Derevko, Natasha Romanova: The first two seasons of “Alias” were among the best in the history of television, and a huge part of the show’s appeal was the reveal that hero and double agent Sydney Bristow’s mother had been a villain and double agent: the dastardly Irina Derevko. Long thought dead, when Derevko showed up alive — played by the intoxicating Lena Olin — the show went from “compelling” to “amazing.” Derevko is one of many seductive female Russian spies in fiction: Marvel’s Black Widow, originally a villain, is a watered-down version of this type.

Irina Spalko: This Irina (played by Cate Blanchett) appeared in the dreadful “Indiana Jones and the Kingdom of the Crystal Skull.” Even a terrific performance by Blanchett couldn’t save this stinker, though she did distinguish herself as the Russian baddie with the best sword skills.

Nikolai Jakov: His name is a childish joke, but the former head of the KGB was part of some twisty, layered, classic comedy on “Archer.” In the historically ambiguous world of Sterling Archer, the world’s greatest spy, the Cold War seems interminable, but geopolitics takes a backseat to the most insane mother-son relationship in popular culture between Archer and his mother Malory. Jakov provided entertainment and intrigue until his unexpected death, but no closure. We never did find out whether or not Jakov was Archer’s father, though the candidates were narrowed down to the Russian and a few jazz drummers.

Nikolai Volkoff: Another “Russian” wrestler — actually a Croatian — Volkoff was best known in the eighties for committing the most unspeakable sin a wrestler could commit: performing the Russian national anthem before matches. You can say what you want about America, but by God, do not sing a song.

The Russian, General Nikolai Zakharov: This absurdly muscled beast appeared in Garth Ennis and Steve Dillion’s remarkable Punisher story “Welcome Back, Frank.” The Russian is a ludicrous, dunderheaded stereotype who is defeated when Frank Castle uses an obese neighbor to suffocate him, which might be the most American thing ever. Ennis created a far more realistic and compelling Russian villain later in his “Punisher MAX” series, via General Nikolai Alexandrovich Zakharov, who was anything but a joke or stereotype.

Aleksander Lukin, Vasily Karpov: A far less cartoony comic-book villain, Lukin appeared during the seminal “Winter Soldier” storyline by writer Ed Brubaker and artist Steve Epting, who brought back long-dead Cap sidekick Bucky as a brainwashed, Russian-controlled cyborg and inspired Marvel Studios’ best movie, “Captain America: The Winter Soldier.” Lukin was just a boy back in World War II, when a battle involving Captain America and Bucky destroyed his village. Lukin was then adopted by Vasily Karpov, the bitter veteran who Manchurian Candidated Bucky. Thanks to the always sharp writing of Brubaker, Lukin had layers.

Alexei de Sadeski: In Stanley Kubrick’s classic satire “Dr. Strangelove or: How I Learned to Stop Worrying and Love the Bomb,” Soviet Ambassador Alexei de Sadeski is a Cuban-cigar-chompin’ sneak, though he’s less orgasmic over doomsday than most characters, which is surprising given the sadistic roots of his name. Today he would probably be considered a moderate or hippie.

Ivan Korshunov: In massive action hit “Air Force One,” this Russian terrorist, played by Gary Oldman, hijacks the president’s plane as part of a plot to get an even worse Russian villain released from prison. Oldman’s performance is underplayed and powerful, but this story is so out of date. Today’s Russians can get anything they want from the U.S. via Twitter DM.

Colonel Podovsky: The evils of Russia were epitomized in this brutal torturer whose enhanced interrogation methods were on gory display in “Rambo: First Blood Part II.” Rambo eventually defeated Podovsky through a mix of diplomacy, reasoning, and compassion. Or maybe it was a rocket launcher. I’ll have to rewatch.

Superman: Yes, Superman! An alternate-universe comic book called “Red Son” answered the question, “What would happen if Superman landed in Russia instead of Kansas?” Short answer: He becomes a Stalinist dictator who tries to save the world by controlling it. Oh, and Batman becomes a terrorist and Lex Luthor becomes a hero.

General Anatoly Gogol: In the endless James Bond series, there have been plenty of dastardly dudes and femmes fatales from Russia, but none had the staying power of Gogol, who was the head of the KGB in six Bond films from 1977 (“The Spy Who Loved Me”) to 1987 (“The Living Daylights”). Gogol’s present whereabouts are unknown, but he could be revealed as a member of the Trump administration by April, the way things are going.

Boris Badenov: The ludicrousness of Russian villains may have reached its peak long ago in this cartoony heel who was literally a cartoon: Boris Badenov (corny name alert!) was a Soviet menace in the 1950s “Rocky and Bullwinkle” show. This Russian spy — along with his cohort the seductive Natasha Fatale — worked to destroy America, but Rocky and Bullwinkle were always there to save the day, proving that America has always needed every squirrel, moose and any scrap of entertainment it can get.