The "Wayne's World" soundtrack at 25: "Bohemian Rhapsody," Alice Cooper and how the album became secretly influential 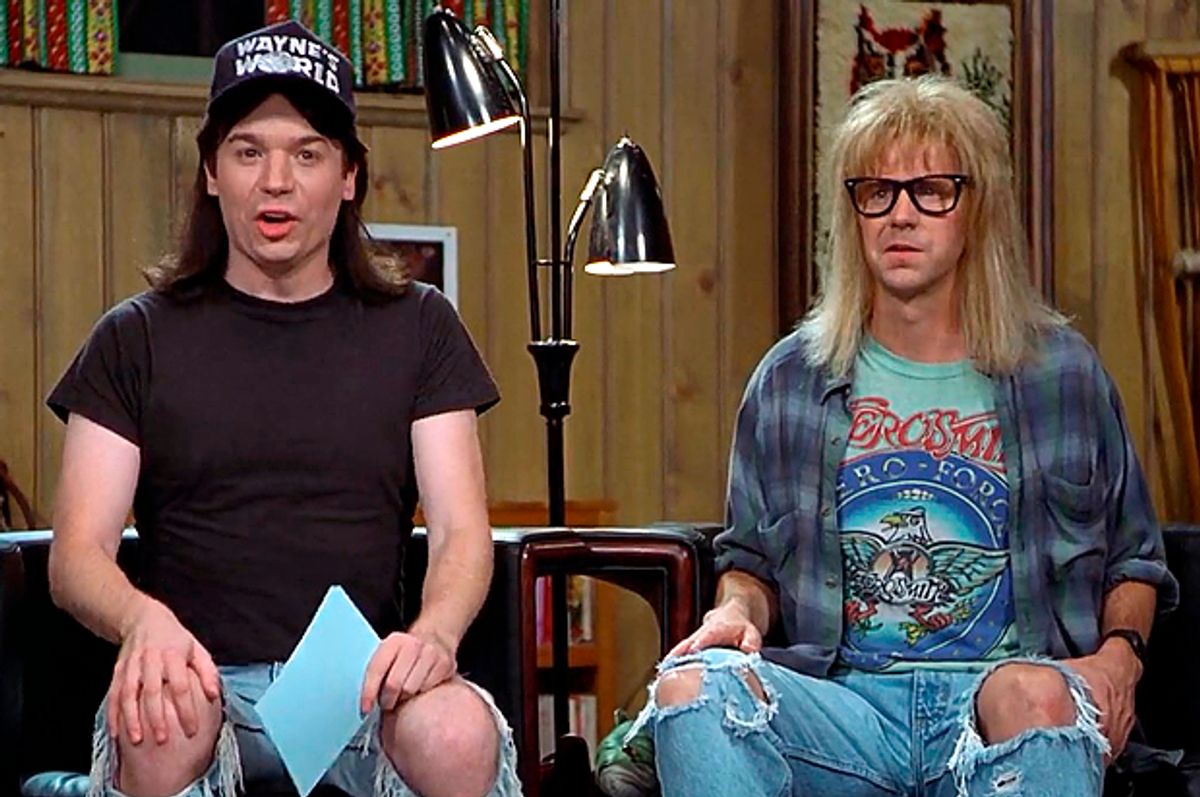 In February, the Mike Myers-Dana Carvey film "Wayne's World" briefly returned to theaters for a well-deserved victory lap in honor of its 25th birthday. Based on a "Saturday Night Live" sketch, the Penelope Spheeris-directed movie was a surprise hit, grossing more than $121 million and launching the lovable public access TV duo Wayne (Myers) and Garth (Carvey) into the pop culture stratosphere. The movie succeeded then (and endures today) because of its lack of guile. Wayne and Garth are sweet-but-savvy characters who expect the best from people, but don't suffer fools gladly — and don't let nefarious people take advantage of their goodwill or music fandom.

In hindsight, the "Wayne's World" soundtrack is a stubborn reminder of two things. One, the kind of hard rock and heavy metal the record espouses didn't die out like the dinosaurs once alternative music became a dominant cultural influence. In fact, these genres ran in parallel for a while, especially on the mainstream rock charts. For example, the March 14, 1992 Mainstream Rock Songs Billboard chart contains songs by Tesla, L.A. Guns and Ozzy Osbourne as well as Nirvana, Pearl Jam and U2. And two, the "Wayne's World" compilation embodied the creative and commercial renaissance movie soundtracks experienced in 1992. In fact, that year set the tone for the rest of the decade's film-related releases.

As the '90s dawned, the influence of movie soundtrack albums had waned. Songs from films remained popular: Billboard's overall No. 1 single of 1991, Bryan Adams' "(Everything I Do) I Do It for You," came from the "Robin Hood: Prince of Thieves" soundtrack, while Jon Bon Jovi's 1990 smash "Blaze of Glory" appeared in "Young Guns II."

However, until "Wayne's World" hit the top spot, the last movie soundtrack to land at No. 1 was Prince's "Batman" album in August 1989. In fact, from 1987 to 1989, only four soundtracks landed in the top 100 of Billboard's year-end top albums list. 1990 and 1991 fared only slightly better: Six soundtracks appear in this cumulative chart.

It's understandable that the soundtrack bubble would have burst by the end of the '80s. The sheer number of blockbuster soundtracks released during that decade created an unsustainable multiplatinum pace. The statistics are still staggering: As Billboard reported in its 1984 year-end issue, 10 soundtracks went platinum that year — "more than in the two previous best years for soundtracks combined" — seven soundtrack-based singles hit No. 1, and the "Footloose" soundtrack produced six top 40 singles. Prince's "Purple Rain" was even certified eight times platinum, an amount eclipsed only by 1978's "Saturday Night Fever."

Starting in 1992, however, a new blockbuster soundtrack era emerged thanks to the "The Bodyguard." Notable for containing Whitney Houston's cover of Dolly Parton's "I Will Always Love You" — as well as for hits "I Have Nothing," "Run to You" and a cover of "I'm Every Woman" — the record sold 10 million copies by the end of 1993. Later in the decade, lightning struck twice for Houston, as her 1995 "Waiting To Exhale" soundtrack sold 7 million copies. The nostalgic double album "Forrest Gump" (certified five times platinum in 1995), 1996's "Space Jam" (5 million copies) and 1997's Celine Dion-driven "Titanic: Music from the Motion Picture" (10 million copies) also did big sales numbers in the 1990s.

The "Wayne's World" soundtrack eventually was certified only double platinum, although its cultural influence had a long tail. Queen's glam opus "Bohemian Rhapsody" — used deftly in a scene where Carvey, Myers and their crew lip-sync and headbang in unison to the song — became a surprise hit. In fact, "Bohemian Rhapsody" re-entered the Billboard Hot 100 and landed at No. 2, a higher chart peak than it originally reached in 1976, and nabbed Queen an MTV Video Music Award.

This scenario — an older song receiving a popularity bump from prominent movie placement — repeated itself multiple times, both in 1992 and beyond. The king of this trick was Quentin Tarantino, who resurrected Stealers Wheel's mangy rock hit "Stuck In The Middle With You" for 1992's "Reservoir Dogs" and, later, leveraged Urge Overkill's spooky cover of Neil Diamond's "Girl, You'll Be a Woman Soon" for 1994's "Pulp Fiction."

The Knack's 1979 power-pop supernova "My Sharona" received renewed interest thanks to Winona Ryder's convenience store dance moves in 1994's "Reality Bites." And a 1988 song called "Crash" by the U.K. indie-pop band Primitives became an alt-rock hit after being recycled for the 1994 movie "Dumb & Dumber."

Veteran artists themselves also received new leases on life thanks to several 1992 soundtracks. Alice Cooper's sleek, hard rock silver bullet "Feed My Frankenstein" appears on the "Wayne's World" soundtrack. The movie itself helped re-introduce the rocker to a whole new audience, courtesy of a humanizing (and humorous) guest appearance. Backstage after a Milwaukee concert — where Cooper performed "Feed My Frankenstein" — Wayne and Garth gawk in awe as the icon coolly schools them on the city's history. "Actually, it's pronounced millie-wah-kay,' which is Algonquin for 'the good land,'" he says.

In 1992, Eric Clapton also appeared on the "Wayne's World" soundtrack (as well as on the "Lethal Weapon 3" compilation), although he's better known for that year's "Rush." This soundtrack contains "Tears in Heaven," a somber acoustic song he wrote after the accidental death of his 4-year-old son. "Tears in Heaven," which was followed by a wildly successful "MTV Unplugged" appearance and album, helped transform Clapton into a successful adult contemporary artist. Later in the decade, soundtrack work also buoyed Bruce Springsteen, who was at a career crossroads in the '90s as a solo artist: His "Streets of Philadelphia," from 1993's "Philadelphia," won four Grammy Awards and the Academy Award for Best Original Song.

On a broader scale, 1992 also heralded the resurgence (and viability) of carefully curated, genre-based soundtracks that resembled cool mixtapes more than promotional vehicles. The most notable of these is "Singles," which ostensibly capitalizes on the "grunge" movement by mixing Pacific Northwest stalwarts and upstarts alike. Still, strong tracks by Paul Westerberg and Smashing Pumpkins give "Singles" resonance, and the former has a prominent presence on a forthcoming deluxe reissue. This kind of alternative music soundtrack became de rigueur for the rest of the '90s, with 1995's "Clueless" and "Empire Records," and 1998's "Can't Hardly Wait" emerging as standouts.

Other genres also received a boost. In 1992, hip-hop-based soundtracks such as "Trespass" built on the popularity of 1991's "Boyz N the Hood" and "New Jack City," and continued paving the way for the eventual success of 1993's "Menace II Society," 1994's "Above the Rim" and 1995's "Dangerous Minds." R&B also had a big year in 1992, topped by the smash "Boomerang" and "Mo' Money." Plus, "Wayne's World" was a direct precursor to 1993's hard rock soundtrack juggernaut "Last Action Hero," which highlights AC/DC, Alice in Chains and Megadeth.

Of course, as with every year, 1992 was also marked by seemingly sure-things that underperformed. David Bowie released the Nile Rodgers-produced "Cool World" soundtrack cut "Real Cool World." Although the song did modestly well on the dance and alternative charts, the accompanying album peaked at No. 89 on the Billboard charts.

The "Coneheads" soundtrack spawned a hit in the Red Hot Chili Peppers' "Soul to Squeeze," but even the carrot of an R.E.M. b-side ("It's a Free World, Baby") and chestnuts from Paul Simon and Soft Cell couldn't make the album a hit. And despite featuring Dr. Dre's first post-N.W.A. single (not to mention the recorded debut of Snoop Dogg), the "Deep Cover" soundtrack only scraped the lower reaches of the Billboard Top 200.

What's interesting is that 2017 is experiencing something of a soundtrack resurgence. The Billboard album chart dated Jan. 21 featured four soundtracks in the top 10 for the first time since 1998. Of these four, half — "Suicide Squad: The Album" and "Sing: Original Motion Picture Soundtrack" — feature a mix of modern and classic artists. The former yet again resurrects "Bohemian Rhapsody," although this time the song is covered by chameleonic pop group Panic! at the Disco. As it turns out, 25 years later, the "Wayne's World" formula of mingling the old and the new (or, rather, making old things new again) remains a completely worthwhile commercial move.