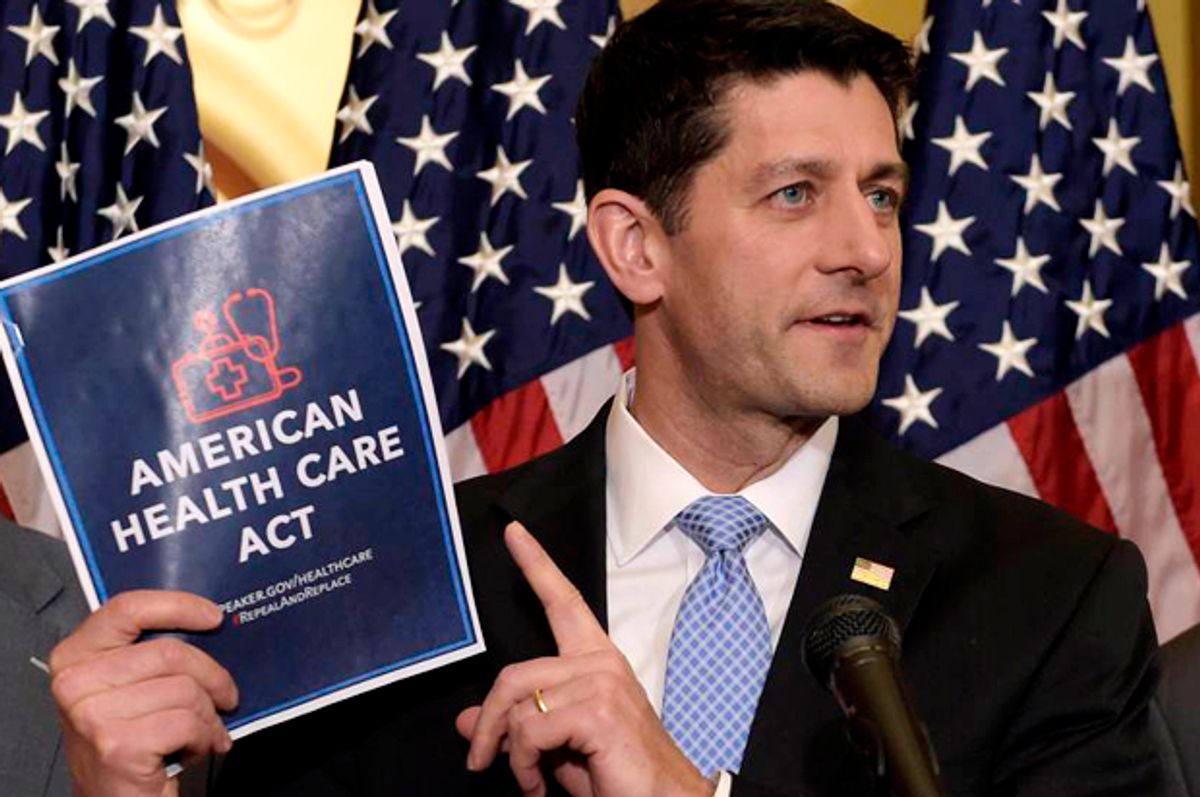 The Congressional Budget Office just dropped a train on the Republicans’ Obamacare “replacement” bill. According to the budget office, the American Health Care Act would, if enacted, result in 14 million people losing insurance coverage next year. The office's long-term projections for insurance coverage were awful as well: By 2026, the number of people losing insurance would rise to 24 million. Per the office, if Obamacare were to be left to its own devices, 28 million people would lack insurance coverage in 2026. Under the American Health Care Act, that number would be a whopping 52 million.

The Congressional Budget Office score is going to cause major problems for the GOP leadership’s plan to jam this terrible bill through Congress, which explains why top Republicans moved to pre-empt the fallout by trashing the agency’s credibility and making wild claims about all the wonderful things the AHCA would accomplish.

Health and Human Services Secretary Tom Price flat-out lied about the AHCA's impact on coverage and the affordability of insurance. Over the weekend Price said on NBC’s “Meet the Press” that “nobody will be worse off financially” relative to his or her situation under the ACA and that he believes coverage will actually increase under the Republican bill. The budget office's score just rammed a dagger through both those claims: It found that premiums on the individual market would be higher in the short term relative to what they would be under Obamacare.

As I and many others have pointed out, the Republican bill would make the lives of older, sicker people on the individual market considerably worse; their premium subsidies would be slashed as much as 80 percent while insurers would be allowed to charge them higher premiums. The Wall Street Journal reported today that “a 62-year-old currently earning about $18,000 a year could pay nearly $20,000 annually to get health-insurance coverage under the House GOP plan — compared with about $760 a year that person would owe toward premiums under the ACA.”

The legislation would also halt Obamacare’s expansion of Medicaid and slash funding for the program. Expanded Medicaid accounts for a large portion of the coverage gains under the Affordable Care Act. Restructuring Medicaid’s funding as intended by the AHCA would guarantee that people would be dropped from the rolls. As the budget office noted, the spike in the number of people left uninsured under the AHCA would stem "in large part from changes in Medicaid enrollment.”

While Price making wild promises about what the Republican plan will do, House Speaker Paul Ryan was busily talking up the “freedom” aspect of the bill. “Freedom” in Ryan’s telling is the ability to use your money to buy whatever you desire. That’s not freedom so as much as it is “being rich.” Part of Ryan’s message is that the AHCA offers people the “freedom” to go without insurance and slip into medical bankruptcy.

Asked on CBS News how many people the Republican plan would cover, Ryan declined to provide a number, explaining that the bursting geysers of freedom that will erupt following the bill’s passage make it impossible to do any estimates. “I can’t answer that question,” Ryan said. “It’s up to people.”

Ryan actually admitted that the AHCA can’t compete with Obamacare’s individual mandate when it comes to expanding coverage, but countered by saying, “People are going to do what they want to do with their lives because we believe in individual freedom in this country.” That includes the “freedom” to go without health insurance. “You get it if you want it,” Ryan said. “That’s freedom.”

There’s a lot to process here, but let’s zero in on this “freedom” to go uninsured that Ryan is extolling, as it actually undermines the case for the AHCA. As I’ve written before, there is a de facto mandate within the Republican health care bill: It’s just weaker than Obamacare’s mandate and won’t really work all that well. Under the AHCA, you have the “freedom” to go uninsured, but if you go more than two months without coverage you are subjected to a 30 percent penalty rate by insurers when you do try to buy a plan.

Look at it this way: The Republicans’ health care reform bill punishes you for trying to buy insurance if you’ve previously been uninsured. The Congressional Budget Office found that while this penalty rate might encourage some people to purchase insurance in 2018, it will have the opposite effect in the long term. “In most years after 2018,” the budget office noted, “roughly 2 million fewer people would purchase insurance because they would either have to pay the surcharge or provide documentation about previous health insurance coverage.” Basically, people will just wait until they’re sick to buy coverage and end up paying more for it.

Promising people the moon when it comes to health care is, to put it mildly, stupid. The GOP knows this, given the fact that it reaped substantial political rewards from attacking Democrats on their unmet health care promises. But Republican leaders now find themselves caught between their campaign pledges to eliminate the Affordable Care Act, the expectation to maintain the ACA’s insurance coverage gains, and the difficulty of crafting legislation that can actually pass Congress.

The Congressional Budget Office report makes clear how aggressively mendacious the Republicans’ health care strategy is. It also showed that the American Health Care Act is an absurd and dreadful piece of legislation that cannot, by any reasonable standard, be called a “replacement” for the Affordable Care Act.