The White House continues to tell Americans to take Trump seriously, not literally 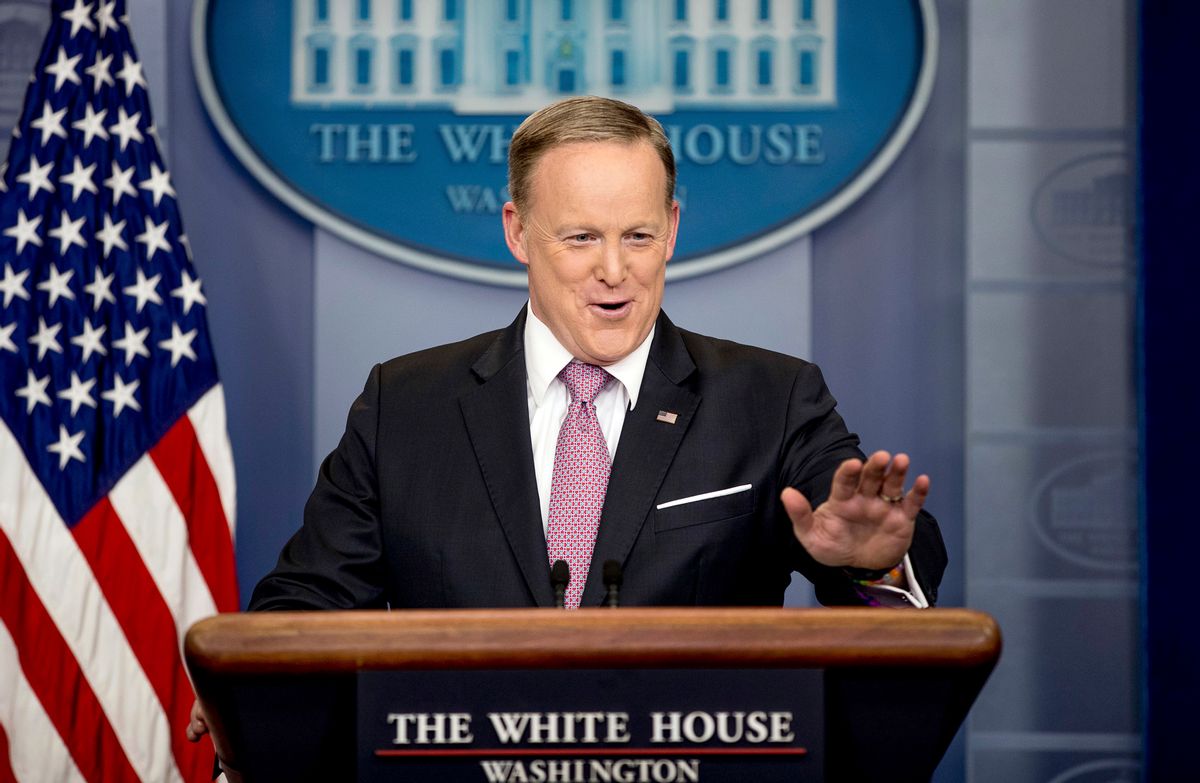 As Donald Trump ascended ahead of 17 other competitors on the campaign trail, one conservative journalist coined a phrase to describe the disconnect between his appeal to voters and his actual words and deeds. “The press takes him literally, but not seriously; his supporters take him seriously, but not literally,” The Atlantic's Salena Zito wrote last year in response to Trump’s campaign claim that the unemployment numbers were manipulated to make former President Barack Obama look good.

White House Press Secretary Sean Spicer appears to now be remixing that phrase to explain away Trump's continuous stream of misleading comments and sudden reversal on the official unemployment numbers.

"Can you say affirmatively that whenever the president says something, we can trust it to be real?" Peter Alexander of NBC News asked Spicer at the daily press briefing on Monday.

"If he's not joking, of course," Spicer replied with a chuckle.

For nearly two months, the White House has made a series of baseless accusations and contradictory statements. Since taking office, Trump has falsely claimed that millions of illegal voters won rival Hillary Clinton the popular vote and that millions of invisible people made his inauguration larger than that of President Barack Obama's first in 2009.

As if his controversial claims about widespread voter fraud were not provocative enough, Trump also recently accused his predecessor of a criminal felony. In a series of five tweets sent on the morning of Saturday, March 4, Trump accused Obama of illegally placing a “Nixon/Watergate”-style "wiretapp" on him during the presidential campaign.

Spicer was grilled at Monday’s press briefing about statements Trump still hasn’t provided any evidence for, even as the House Intelligence Committee’s deadline for the Department of Justice to provide any documents supporting Trump's "wiretapp" claim comes and goes on March 13.

“When he says something, can we trust that it’s real, or should we assume that it’s phony?” Alexander asked Spicer.

After the first jobs report of the Trump era was released last Friday, Spicer defended Trump's past claims that the job numbers during the Obama administration were "phony," telling reporters that Trump feels they are "very real now" that the Bureau of Labor Statistics' showed that 235,000 new jobs were created in February -- a figure not far from the same period the year before.

"You said, 'They may have been phony in the past but it's very real now,'" Alexander said, quoting Spicer's own words. “How can we believe that it’s real when you just told us that it’s phony then, but now it’s real?” Alexander pressed. “How can we trust anything he says, that he won’t later say, actually it was the opposite?”

Spicer said that reporters and Americans should trust Trump “If he’s not joking, of course.” The White House spokesperson said that “every time that he speaks authoritatively, he’s speaking as president of United States.”

Spicer continued to defend Trump's past skepticism of job numbers."The percentage of people who are unemployed varies widely by who you're asking and the way you do the analyses about who's actually in the workforce," he argued.

"Are CBO numbers legitimate are not?" Jackson asked. (NOTE: the monthly jobs reports are provided by the BLS, not the CBO.)

"That's not my determination to make," Spicer responded, before reiterating that CBO projections for the number of people insured under the Affordable Care Act had been "off by more than 50%."

Spicer continued to defend the reliability of Trump's claims more broadly, as he saw his briefing quickly turn into a debate about whether claims made by the president and his administration can ever be trusted.

"He doesn't really think that President Obama went up and tapped his phone personally, but I think there's no question that the Obama administration, that there were actions about surveillance and other activities that occurred in the 2016 election," Spicer responded. "That is a widely reported activity that occurred back then."

The exchange between Alexander and Spicer went on for nearly five minutes.

"If you look at the president’s tweet, he said wiretapping in quote,” Spicer noted. "That spans a host of surveillance options.”

Later returning to Trump's controversial claims that widespread voter fraud may have occurred during the presidential election, the White House spokesperson insisted that "he still believes that."

Spicer's presser was so disastrous that CNN's Jake Tapper immediately followed up by delivering a blistering on-air rebuke.

“We as a nation have had to live in this farce for the last nine days, where defenders of the president have twisted themselves into pretzels to try to suggest the possibility that the tweets weren’t preposterous by rejiggering the facts of the tweets to try and make this wild, unfounded claim by the president seem to live somewhere in the vicinity of the neighborhood of possible,” the CNN anchor said.

“This White House is now spending its energy and your tax dollars trying to change demonstrably false assertions into perfectly understandable beliefs tangentially related to the original lie,” Tapper continued. “And while doing so they’re squandering their own credibility and they’re wasting time defending the indefensible, instead of devoting time to, say, improving your lives.”

He continued: “Sometimes revisionism is so blatant, it’s not revisionism, it’s a complete rewrite”