Steve King is a virulent racist — why be surprised? He represents the current Republican Party perfectly

Not every Republican talks openly about "somebody else's babies," but hateful sentiments suffuse the entire GOP 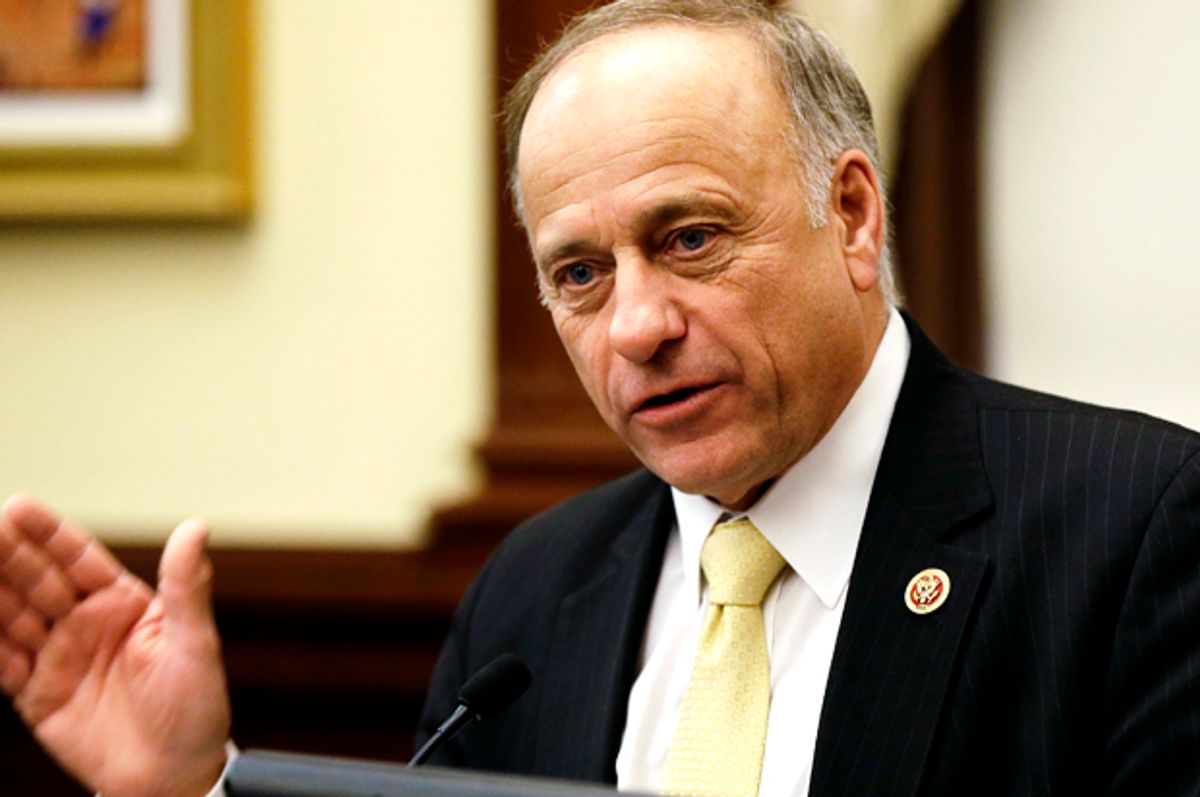 Rep. Steve King is who the Republican Party actually is in 2017. No additional reminder of its character should be necessary. Yet too many people rage at individuals, groups and a political party that are truly beneath condemnation.

On Sunday King — who has represented northwestern Iowa in Congress since 2003 — used Twitter to send out a message of support for right-wing Dutch politician Geert Wilders and his bid to become prime minister of the Netherlands.

On Monday morning King refused to back away from this statement in an appearance on CNN's "New Day." Host Chris Cuomo tried to draw him out: "Either a Muslim American, an Italian-American, an Irish-Scotch-German-American — which is what your roots are — either those are all equal things or they are not. What is your answer?" King paused and then said, "They contribute differently to our culture and civilization."

This is not the first time King has trafficked in white supremacy. His portfolio of bigotry and racism includes claims that white people have “contributed more to civilization” and that others constitute some type of racial "subgroup." Not surprisingly, he has also defended the American swastika — that is the Confederate battle flag.

King's racist comments are also part of a much larger chorus of white supremacy that has recently swept across Europe in the form of far- right-wing political parties such as the National Front in France, Jobbik in Hungary and Wilders' Party for Freedom in the Netherlands. This racist nativism has now borne rotten fruit in the United States with the rise of the Donald Trump and the white nationalist and white supremacist movement known as the alt-right.

Echoing King, President Donald Trump has said that Mexicans come to America in order to rape and kill white people. Representing the very definition of "old-fashioned" racism, he has said that by virtue of his ancestry a Mexican-American judge would be unable to act fairly in a case against Trump. And Trump also believes in a version of the scientific racism endorsed by Madison Grant during the first part of the 20th century that there are "superior" and "inferior" genes and that people can be bred like horses. As such, it is not surprising that racial terrorist organizations like the Ku Klux Klan endorsed Trump's candidacy or that white supremacists have been unified and enthusiastic in their praise of his policies.

Trump's closest advisers and confidantes possess beliefs and attitudes that are not much different from those of Steve King.

Attorney General Jeff Sessions has joked about his support of the Ku Klux Klan and used a racial slur to describe an African-American attorney. He has actively worked to roll back the civil rights of people of color, women and LGBT people and surely will not make protecting the civil rights of racial or other minority groups a priority for the Department of Justice.

Steve Bannon, Trump's chief White House strategist, is the former head of Breitbart News, an online forum that serves as one of the main online conduits for white supremacists and anti-Semites. Bannon has embraced the racist and white supremacist book "The Camp of Saints" and its themes of genocidal violence to discuss Muslim and other nonwhite immigration to Europe.

Michael Anton, the online author also known as Decius — now a policy aide at the National Security Council — believes that immigration by nonwhites and such values as "diversity" and "multiculturalism" are existential threats to white society.

King's racism and xenophobia are neither anathema or outliers relative to Republican voters. Social scientists have repeatedly shown how the election of Barack Obama resulted in racist backlash that helped to elect Trump. As part of that dynamic, "old-fashioned racism" (which was thought to have been vanquished from the mainstream of American society) has returned with a vengeance and is now closely correlated with white voters' support of the Republican Party. Other research has demonstrated that white Republicans, other conservatives and right-leaning independents are also hostile toward immigrants, believe that America should be a white Christian country and consider white people to be somehow oppressed.

Few if any Republican elected officials or other elites will condemn Steve King and his comments. Why? They do not want to alienate their voters. Even if they wouldn't use the same words, Republican leaders are also more likely than not to agree with King's sentiments. Silence is complicity.

Over the weekend, Rep. King was one of the most popular topics on Twitter and other social media. This is to be expected given the incendiary nature of his comments. Such a reaction, however, is largely a waste of energy. In the age of Donald Trump, it is important to manage one's finite resources and to that end accept several basic truths.

As I have argued many times here and elsewhere, today's Republican Party is the United States' largest white identity organization. Conservatism and racism have been one and the same thing since the end of the civil rights movement. Trump fits the definition of a racist and a fascist. To acknowledge the weight of these facts is not an act of surrender but a recognition of the realities of the political terrain. To feel surprised and upset at King's most recent white supremacist bloviating — or those of Trump and other Republicans and conservatives — is wholly understandable. But one cannot shame the devil.

Now is the time to take that energy and use it to support grassroots mobilization to protect the commons and civil society. Now is the time to vote Republicans out of office on the local and state level, to use the power of the dollar and political consumerism to effect positive political change and to steel ourselves in other ways to fight against the fascist twilight that has befallen the United States.

Anything less will ensure  Trump and the Republican Party's continued victory by ways both dishonorable and crooked. Unfortunately, in politics, winning is really all that matters. It is long past time that liberals, progressives and principled independents who oppose Trump and the current Republican Party borrow from that lesson.