Teens in Pennsylvania, Wisconsin and Maine have picked up the mantle of transgender rights and are fighting on 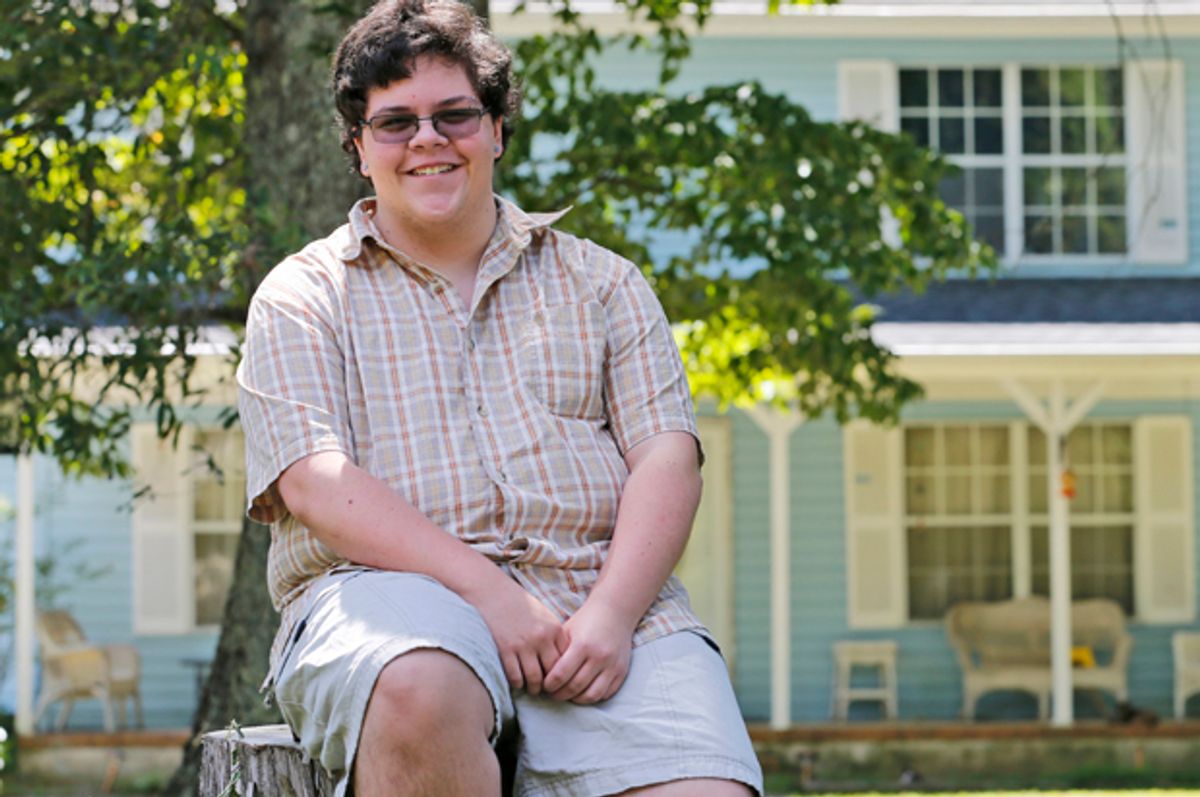 Gavin Grimm didn’t mean to become the poster child for America’s debate over where trans people should go to the bathroom. He just wanted to go to school.

Grimm, now 17, came out to friends and family as transgender prior to his sophomore year of high school. Administrators at Gloucester High School, in Gloucester, Virginia, were initially supportive, enabling Grimm to be called by the correct name and pronouns by faculty and staff. Although there had been an initial agreement that he would use the bathroom located in the nurse’s office, he quickly learned that walking the long distance to the only facility allotted him took away time from his classes. Grimm asked to use the boys’ bathroom instead, and for almost two months, he was allowed to do so with no complaints.

All that changed when the school board held a series of meetings to debate his right to use the male facilities. In court proceedings, Grimm has claimed that the concerned parents and local residents who came to speak at these meetings called him a “freak.” They said that allowing him to use the bathroom corresponding to his gender identity would open up the door to predators raping their children — a widely debunked myth.

Just as quickly as he was granted the right to use the appropriate restroom, the school board voted to take it away.

That 2015 decision triggered his two-year fight for the right to be treated just like every other male student at his school, a case that made it all the way to the Supreme Court. Oral arguments in G.G. v. Gloucester were scheduled to be heard later this month.

Grimm’s case, however, has encountered a major setback after the Supreme Court reversed its decision to hear the case, removing it from the high court’s calendar this term. Following the Trump administration’s repeal of Title IX guidance for transgender students, the Supreme Court ruled there were not sufficient grounds for the case to be argued.

When it had sided with Grimm, the Fourth Circuit Court of Appeals cited the Obama administration’s 2016 “Dear Colleague” letter advising schools to let trans students use bathrooms and locker room facilities consistent with their gender identity.

But without that guidance in place, the Supreme Court argued that the lower court's ruling was no longer valid, vacating the prior decision in Grimm’s favor. The court announced last week that the case would effectively be sent back to the Fourth Circuit for further argument.

What that means for Grimm, who is now in his senior year, is that he won’t receive the resolution he seeks before he graduates. The next session of the Supreme Court starts in October, but Ilona Turner, the legal director for the Transgender Law Center, said it could be years before his case, or another like it, could appear before the nation’s highest court. That’s a major letdown for LGBT rights advocates hoping that the Court would decisively prevent the rollback of rights for trans students.

“For students, the immediate impact is the invalidation of their experience,” said Aidan Key, the executive director for Gender Diversity, an organization that works for trans inclusion in schools. “That is surely devastating for them.”

While the Grimm case hasn't attained the outcome that many hoped for, the fight for trans equality continues in the lower courts, where judges will be tasked with interpreting “what Title IX means separate from whatever the current administration thinks it means,” Turner said.

In 2014 Obama administration announced that it would extend its interpretation of Title IX under the Education Amendments of 1972 to cover trans students. That law prohibits discrimination on the basis of race, national origin and sex, and the Departments of Justice and Education argued that gender identity is included. But in a February decision to revoke the “Dear Colleague” letter, the Trump administration argued that Title IX enforcement should be left up to local school districts to decide at their discretion.

“Lower courts will have the chance to interpret the statute and tell us what it means,” Turner said. “The Supreme Court then reviews that.”

Grimm's case, though, wasn’t based solely on the idea that trans students are protected under Title IX. His legal team argued that the Equal Protection Clause of the 14th Amendment, which states that the federal government cannot “deprive . . . any person within its jurisdiction the equal protection of the laws.”

Eighteen-year-old Juliet Evancho, the trans sister of inauguration singer Jackie Evancho, recently won a Pennsylvania court case after a federal judge, Mark R. Hornak, ruled that barring her access to the appropriate restroom in school violates the Constitution. “The Plaintiffs appear to the Court to be young people seeking to do what young people try to do every day — go to school, obtain an education, and interact as equals with their peers,” he wrote.

“[This decision] was a big deal, and it just affirms that we are right on the cusp,” argued Rachel Tiven, the CEO of Lambda Legal. “The law is that you cannot discriminate or exclude trans kids from participation. Targeting people because they’re different is just a way to say: We don’t want you here, and we’re excluding you. That’s mean and un-American.”

Later this month the United States Court of Appeals for the Seventh Circuit is set to hear a case concerning Ash Whitaker. A 16-year-old high school student in Kenosha, Wisconsin, Whitaker has claimed that administrators ignored his request to be treated as a boy at his high school. He alleged in a court briefing that the district hired security guards to escort him to the bathroom and that staff continued to refer to him with female pronouns, as well as calling him by his birth name.

Whitaker also claimed in the brief that administrators wanted to slap a green wristband on him to mark him as transgender.

“I just want to be myself and go to school like any other kid, and the harassment from my administration and the spotlight that has put me under has made that really hard,” he said in a public statement.

U.S. District Judge Pamela Pepper in September issued a preliminary injunction so that Whitaker could use the bathroom sought, and it’s yet another sign that — despite bumps in the road — the U.S. court system is moving in the direction of progress. Since the 2014 Fourth Circuit Court of Appeals ruling in favor of Nicole Maines, a trans student in Maine, every major court decision has been decided in favor of equal protections under the law. Maines, now 19, had been prevented from using the girls’ bathroom in her middle school after a classmate’s grandfather complained.

Maines said the Supreme Court’s decision not to hear the Grimm case is “disappointing.”

“This is such a pressing issue for so many kids and such an everyday occurrence,” Maines, who is now a freshman in college, said over the phone. “Having been there, I understand how frustrating and terrible it is.”

But while the rights of transgender students are debated in the lower courts, trans advocate Aidan Key said that it’s important for everyone to continue advocating for LGBT youth.

“The hardships that students face are pretty significant,” Key explained. “If a student isn’t fortunate enough to have a supportive family and [has] no support at school, you can bet that child is at a significant risk of taking their own life. The issue has been elevated to a national dialogue in such a polarizing way that it ups the ante. The people in vocal support are on one side and the people adamantly against it are on the other. It leaves less room for openness to discussion.”

Over the past decade, Key has worked with schools to help them address the needs of this vulnerable population — one for which statistics show there's a higher risk of suicidal ideation than for their peers. Although Key claims that many districts have come around on the issue, a lack of decision-making from the nation’s highest court could permit students to be targeted by administrators and principals who aren’t yet on board.

“It requires a learning process,” Key said. “We are definitely making some incredible progress but still have a significant way to go.”