Why can't Republicans give straight answers about their health care bill? Because the truth is ugly

Behind all the buzzwords about freedom, the AHCA isn't about health care. It's just another tax cut for the rich 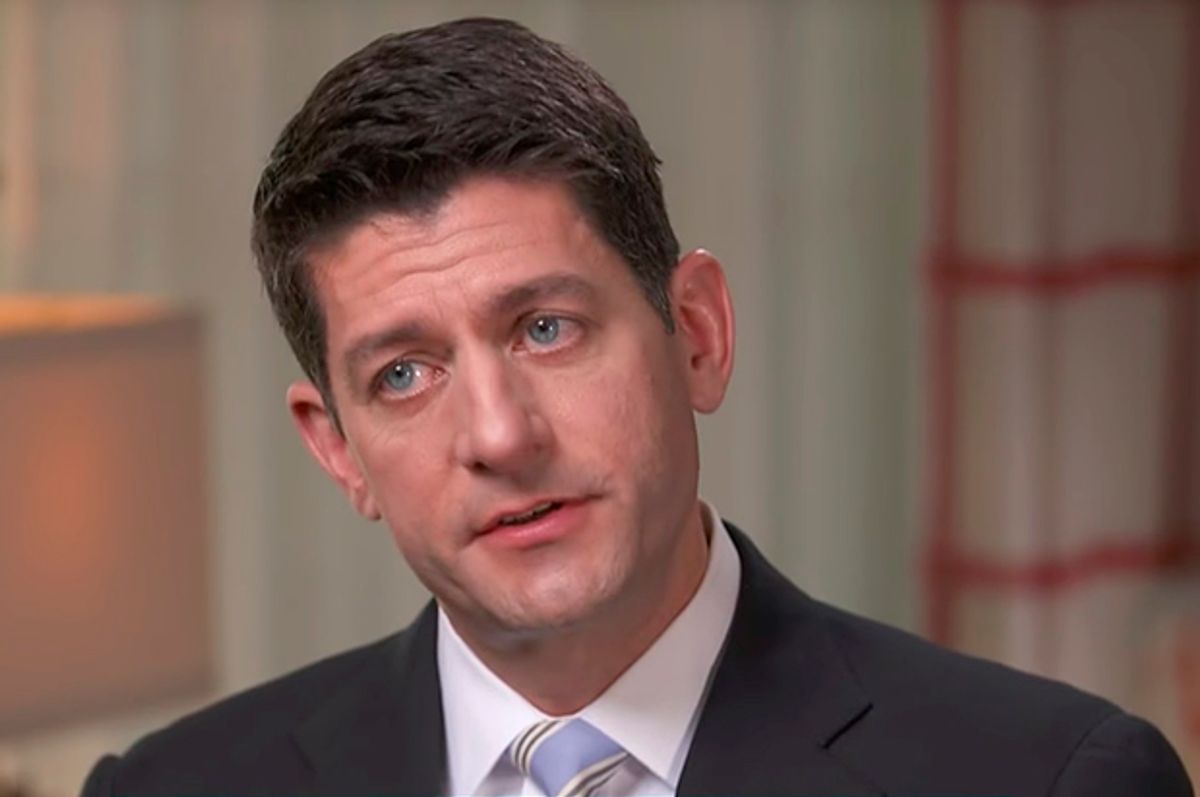 My fondest wish for the next journalist who interviews Paul Ryan about the American Health Care Act, the replacement to Obamacare that Republicans are trying to jam through Congress, is that he or she asks the speaker of the House, “Are you an idiot or are you just assuming the American people are idiots?”

Honestly, I am torn about which is the answer.

This theoretical journalist could ask the same question of just about any Republican proponent of the AHCA. Some even tried to do so over the weekend as members of Congress and the Trump administration fanned out across the networks to pitch the plan. Mostly what they got for their trouble were assertions without evidence that Obamacare is “collapsing,” interspersed with a blizzard of conservative buzzwords: “patient-centered,” “choice,” and that ever-reliable standby, “freedom.”

Asked to consider that the AHCA might result in an increase in health insurance premiums or the loss of coverage for millions of people, Republicans simply refuse to acknowledge the possibility. According to all available evidence, Ryan does not appear to even understand how insurance works. I watched John Dickerson interview him on Sunday on with the faint hope that the “Face the Nation” host would ask Ryan about his apparent unhappiness with health insurance pools such that “the people who are healthy pay for the people who are sick,” which of course is the entire point of health insurance.

The problem is that journalists like Dickerson are asking the wrong questions. The baseline assumption here is that the GOP is making a genuine, good-faith effort to solve some of the problems of the health care system. If you start with that premise, then the questions that flow from it become meaningless queries about optics or the process of passing the legislation.

That is how you get Dickerson asking Ryan if President Trump has given him any help or advice on how to “sell” the AHCA to the public. You get NBC's Chuck Todd nibbling around the edges on "Meet the Press" with Tom Price, asking the secretary of the Health and Human Services Department if he can guarantee that “nobody will be worse off financially when it comes to paying for health care.” You get ABC News' George Stephanopoulos asking Mick Mulvaney, director of the Office of Management and Budget, how he squares Trump’s promises to not touch Medicaid and give everyone health insurance with independent think-tank analyses showing the AHCA will result in the exact opposite of those outcomes.

The answer to Todd’s question, of course, is that Price can’t make such a guarantee. The answer to Stephanopoulos’ question is that Mulvaney can’t square the two competing visions. In all the years that this country has been having a public and loud debate about the fate of Obamacare, the reasons for such Republican doublespeak have become clearer.

Put simply, conservatives do not care about making sure everyone has access to affordable health insurance. They do not care if the poor and working classes have access to Medicaid or sufficient financial subsidies to purchase insurance. If they did care, they would not be working so hard to scale back Obamacare, reduce those subsidies and cut Medicaid while proclaiming that everything will somehow work out so as provide access to affordable coverage for everyone, despite all available evidence to the contrary from every health policy wonk who's to the left of the Cato Institute.

What the Republican Party cares about is repealing all the tax increases from Obamacare, which will benefit the wealthiest members of our society while excluding millions of poorer citizens from access to affordable health insurance. It's really that simple.

The debate our society is having is not about whose plan will result in better or more affordable coverage, lower premiums and lower deductibles. It's about whether our society values and benefits from all citizens having affordable health care and will take concrete steps to insure that they do — or will put our faith in abstract concepts of “freedom” and “markets.”

Conservatives do not believe it's the former. But they are self-aware enough to know that they cannot say so without sounding insensitive to the large percentage of the Republican base that stands to lose out under the ACHA. In recent days Ryan and Mulvaney have at least come close to admitting their real beliefs when confessing that insurance coverage for everyone is not really their goal. But they have then pivoted to talking about Obamacare’s failures, painting themselves as being on a heroic rescue mission to save insurance markets.

So when millions of people begin losing insurance under the ACHA and premiums for comprehensive coverage do not decrease, do Republicans change anything? Do they reimpose some of Obamacare’s cost-containment measures or exchange subsidy levels? These are important questions. At the moment, Republicans are getting away with not having to answer them.