Behind the prosecutor purge: Jeff Sessions, Preet Bharara and echoes of GOP scandals past

Was last week's mass firing of U.S. attorneys just Trump paranoia — or an attempt to shut down an investigation? 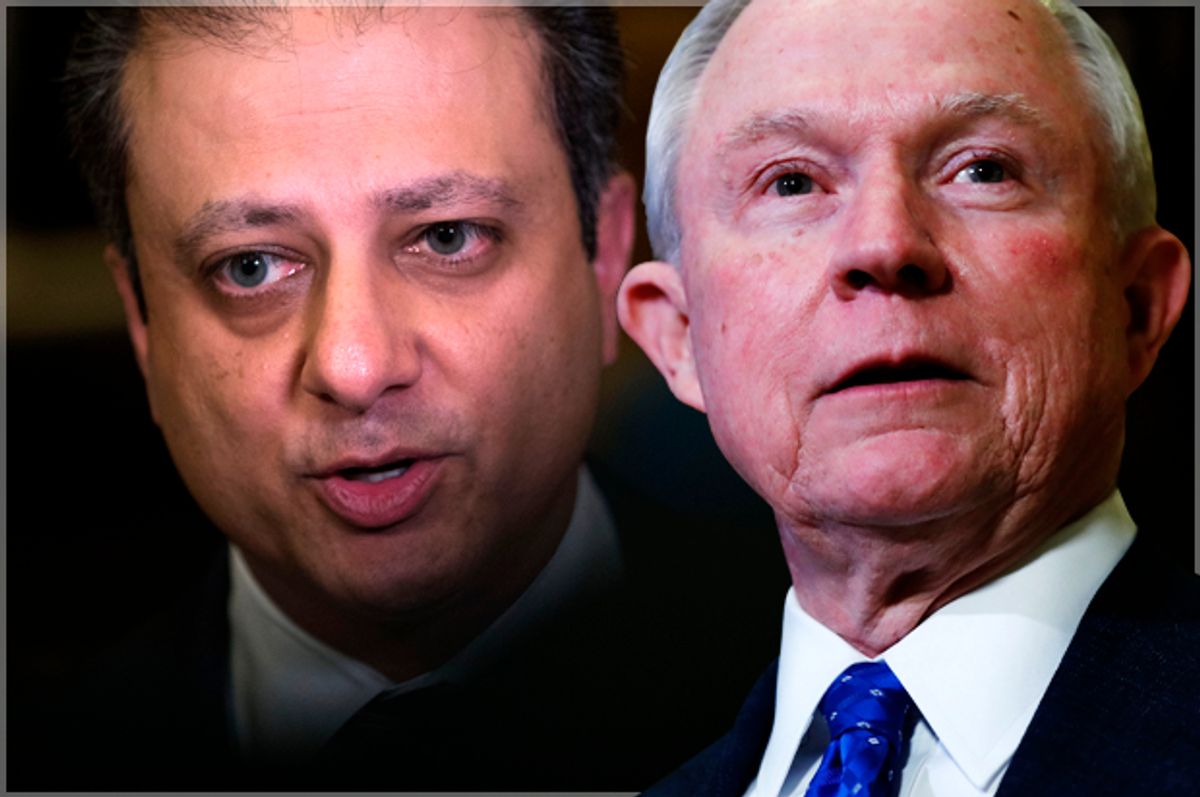 You would think that 40 years after Watergate, Republicans would be careful to not appear overtly political when it comes to the Justice Department. But apparently they can't help themselves. The last GOP Justice Department under George W. Bush created a huge scandal when its leaders abruptly fired a number of federal prosecutors for political purposes. These prosecutors were let go for such reasons as not succumbing to political pressure to indict Democrats in the final days before an election and refusing to bring bogus voter fraud cases. One was fired simply because Bush senior adviser Karl Rove wanted to place a crony in the job. Most of them were loyal Republicans so it caused more of a stir than usual.

But perhaps the worst reason for some of those firings was because prosecutors had brought charges against corrupt Republicans. That was a warning sign to all the federal prosecutors in the country who were still on the job: Stay away from Republicans if you know what's good for you. That scandal eventually led to the resignation of Attorney General Alberto Gonzales, even if lying to Congress about National Security Agency surveillance was the final straw.

President Donald Trump has taken all this to a new level. He has already fired acting Attorney General Sally Yates for refusing to enforce his Muslim travel ban, an executive order that was greeted with shock by legal experts and courts around the nation, leading his lawyers to try to draft a new one that could pass legal muster. Yates was right, and Trump's insulting dismissal letter will long be remembered for its petulance.

On Friday Attorney General Jeff Sessions abruptly demanded the resignations 46 U.S. attorneys who had been appointed by President Barack Obama. It's not unprecedented for a new AG to ask for resignations, although the obvious partisanship in removing only the Obama appointees can leave no doubt about the the motives. But the way this was done was crude, in typical Trump fashion, and it's left a bad taste in everyone's mouths.

When Janet Reno, attorney general during Bill Clinton's administration, asked for the resignations of all the U.S. attorneys, they were allowed to leave gradually, finish up some important cases and wait for their replacements to be confirmed. But Trump wanted these people out immediately, which raises some questions about why.

Sessions gave no indication that he planned a large-scale purge when he spoke to all the prosecutors in the middle of last week about his criminal justice agenda. But on Friday suddenly the hammer was brought down. There is some speculation that this was the result of a paranoid rant by Sean Hannity on his Fox News show Thursday night, when he exhorted Trump to begin purging the "deep state" of all those who are disloyal.

Deep-state Obama holdovers embedded like barnacles in the federal bureaucracy are hell-bent on destroying President Trump. It's time for the Trump administration to purge these saboteurs.

After quoting the notorious Rep. Steve King who said, “Donald Trump needs to purge leftists from the executive branch before disloyal, illegal and treasonous acts sink us," Hannity added, "It's important that the president begins to hear this and act now."

And on Friday the president did just that. The U.S. attorney most surprised by this was Preet Bharara of the Southern District of New York, who last November had been personally assured by Trump and Sessions that he would be staying on. Trump tried to get Bharara on the phone last week and he refused to take the call, telling Sessions it was inappropriate for the president to contact U.S. attorneys, “particularly ones that have jurisdictions over important matters," according to The Wall Street Journal.

There was quite a bit of drama on social media after Bharara tweeted he was refusing to resign and then shortly followed with a note that he had been officially fired. But it was this tweet that really raised eyebrows:

The Moreland Commission was set up in 2013 by Gov. Andrew Cuomo of New York to investigate political corruption. After it passed a few minor ethics reforms, he shut it down in 2014. Bharara decided to investigate why Cuomo did so and ended up indicting the leaders of the state Senate and Assembly along with some of Cuomo's aides. In other words, there was plenty of corruption in New York and the governor had papered it over.

Clearly, Bharara was implying with his tweet that he'd been shut down by Trump for similar reasons. As the man whose jurisdiction includes Trump Tower and many banks and other financial operations, it makes you wonder what he might have been looking at.

We do know that one of the cases Bharara was overseeing was the case against Fox News and Roger Ailes alleging illegal payments had been used to settle sexual harassment complaints. The New York Times reported on Monday evening that a grand jury had just been convened in the case. The Times article references a favor done by Trump in the recent past:

In 2014, Mr. Trump intervened in a dispute between Mr. Ailes and a former aide who said he had damaging information about Mr. Ailes and the network.

Mr. Trump negotiated a settlement on behalf of Mr. Ailes, and later boasted of his work, telling the journalist Gabriel Sherman, “When Roger was having problems, he didn’t call 97 people, he called me.”

There's no word on whether Ailes gave the president a call this week or whether Trump's call to Bharara might have been another attempt to "negotiate a settlement" for his friend. Trump doesn't believe he is capable of having a conflict of interest or inappropriate contact, so it's not impossible to imagine that he might intervene once again on behalf of his good friend Roger.

As it happens, a lawyer at the top of the short list to replace Bharara happens to be Marc Mukasey, one of Roger Ailes' personal attorneys. Mukasey's firm handles real estate matters for Trump son-in-law Jared Kushner, and one of Mukasey's partners is Rudy Giuliani, who made his name as the U.S. attorney for New York himself. Not only that, Marc Mukasey's father, Michael Mukasey, is the man who succeeded Alberto Gonzales as attorney general after he resigned in disgrace over the firing of U.S. attorneys for political reasons. What a coincidence!

For such an outsider, Trump certainly has a small circle of familiar Republican friends.