Blizzard or not so much, you're home now, so revisit the Seinfeld episode that launched a million Stellaaaaaaaas: “The Pen”

Throughout the East Coast, social media and all of Western civilization, one cry can be heard today 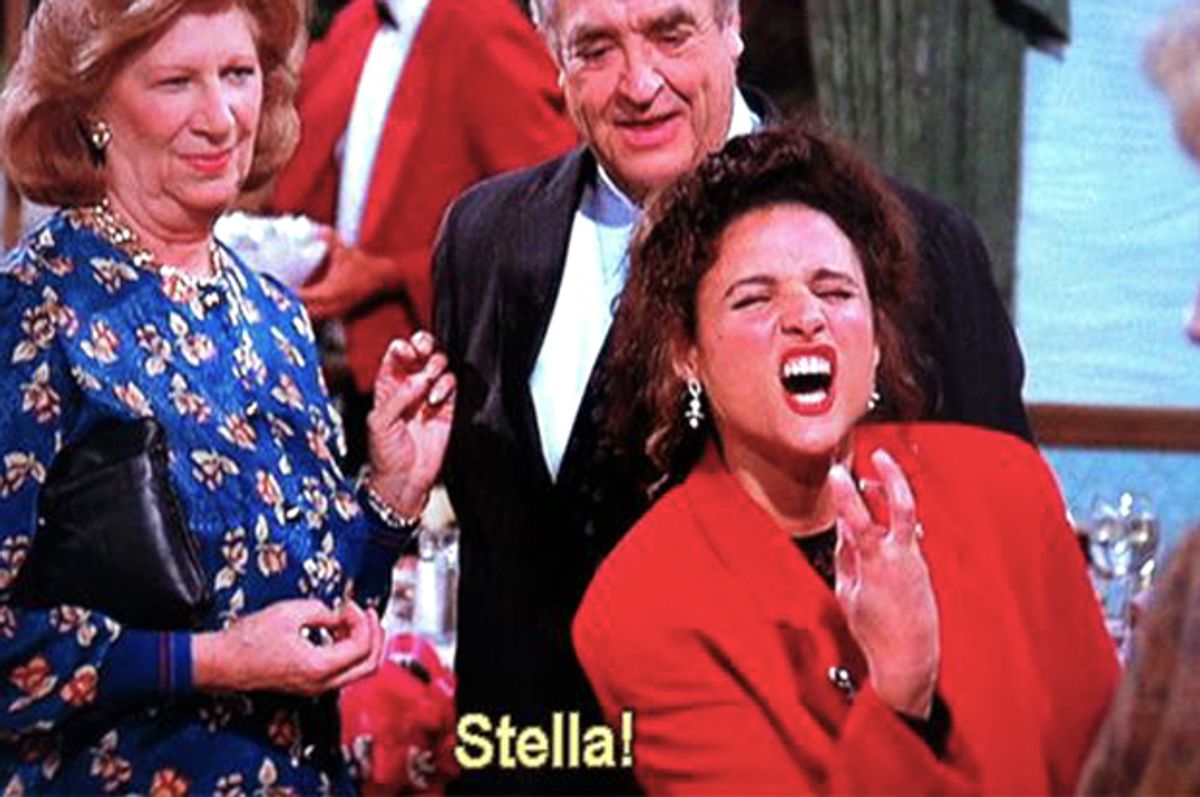 As Winter Storm Stella settles in, this name has been shouted in posts, tweets and memes to express or mock pre-blizzard hysteria. Numerous tweeters have echoed the words of Aparna Nancherla: “If this snowstorm is named Stella just so we can yell that running around the streets, then the weather people have finally earned my trust.”

While this meme can be traced back to Tennessee Williams’ play “A Streetcar Named Desire,” and in particular the movie version starring Marlon Brando, nothing popularized “Stella!” as a catchphrase quite like “The Pen,” a 1991 episode of Seinfeld. This Stella-centric episode is well worth revisiting, especially with the whole world canceled due to that other Stella. “The Pen” isn’t nearly as famous as “The Contest” or “The Strike,” but it spread a catchphrase, showed off the powerhouse comedic talents of Julia Louis-Dreyfus and offered a timeless warning about the madness of old people.

“The Pen” is a weird episode of Seinfeld: There’s no George or Kramer, just Jerry and Elaine — the coolest exes in the multiverse — who are visiting Jerry’s parents Morty and Helen in Florida to scuba dive and attend a ceremony honoring Jerry’s dad, who is leaving his position as president of a condo association. The unusual absence of Jason Alexander and Michael Richards allows Julia Louis-Dreyfus to go to town. Since she’s just friends with Jerry — a status his parents cannot comprehend — she sleeps in the guest room on a foldout bed with a painful bar in the middle. To make matters worse, the condo’s temperature is set north of hellish, since Jerry’s mom is “nuts with temperature.”

Elaine’s thrashing in bed foreshadows a serious back injury and virtuoso comedic performance. After one night in the foldout, Elaine can barely walk, but she finds some refuge in muscle relaxants, which she conveniently takes just before the condo ceremony. Playing drunk or drugged was far from a new concept even back in 1991, but Louis-Dreyfus throws herself into it with every atom of her being, foreshadowing a career of immortal performances that has no end in sight.

Goofed to the gills, all it takes is the introduction of Jerry’s Aunt Stella for Elaine to discover her inner Brando and begin yelling “Stella!” like an adorable lunatic, which she does periodically throughout the rest of the episode. Her Seinfeld highlight reel is long, but this would have to be in the top five performances.

Muscle relaxants aside, this episode is a pitch-perfect, weapons-grade satire of the peculiar insanity of old people, particularly old people who are retired parents in the strange land of Florida. Jerry’s parents are a festival of nagging neurosis, but the episode stealer is the wonderfully named Jack Klompus, played with gruff lunacy by Sandy Baron. Jack, as Seinfeld heads will remember, owns an “astronaut pen” capable of writing upside down. This technology appeals to Jerry, a lazy comedian who frequently writes jokes in bed. Jack and Jerry then have a conversation that’s one of many reasons “Seinfeld” has been compared to the plays of Samuel Beckett. “Waiting for Godot” has nothing on “Debating the Pen” when it comes to absurdity:

Jack: "Do me a personal favor!"

After that hullabaloo, including six protestations, one would think Jerry was safe in accepting the goddamn pen. But no one is safe in this Florida hellscape. As soon as Jack leaves, Jerry’s mom immediately protests, “What’d you take his pen for?” The saga of the pen continues improbably throughout the episode.

That astronaut pen, like so much Seinfeld humor from Festivus to Kramer, was based on real life. Seinfeld producer George Shapiro was the real-life owner of the astronaut pen, and Larry David was the guy who complimented and received it — but felt an anvil of guilt afterward. This episode was inspired by that incident and the fact that both of them had parents living in similar Florida communities. As Larry said in a DVD extra, “There’s a certain pettiness that goes on there that just had to be broadcast.” Or as Jerry put it in the episode, gobsmacked by obsessive oldsters, “What is going on in this community?”

Though this episode is over 25 years old, its subject is more relevant than ever in some ways. Though Jerry and Larry may have meant to document what they considered a particular madness of Jewish condo owners in Florida, the battiness of the Seinfelds resonates with all sorts of parental units, including those who are non-Jewish, condo-less and Florida-phobic. This episode will be appreciated by anyone whose parents drive them bonkers, even if the annoyances don’t involve space pens or sponge cake.

It’s tempting to connect the petty behavior of these old folks with the petty behavior of the orange grandpa sitting in the Oval Office. Sure, there are similarities. Morty is strangely obsessed with Scotch tape and tipping. President Donald Trump can’t stop talking about ratings and nonexistent wiretaps. Helen doesn’t believe in air-conditioning. Trump doesn’t believe in global warming. Jack can’t seem to make up his mind whether he’s OK with Jerry taking his pen. Trump has vacillated on endless issues, from the truth of job reports to presidential golfing.

But Trump — unlike Morty, Helen and Jack — is narcissistic and dangerous. He’s not just another geezer in a condo association; he’s the most powerful person in the world. Trump’s insanity will never be harmless or charming: If he had an astronaut pen, he’s probably put his name on it, dipped it in gold and used it to sign something unconstitutional. Jack Klompus would never sink so low.

So stock up on muscle relaxants and Seinfeld episodes as you hunker down and hope the Stella hype is overblown. Even if she as devastating as advertised, East Coasters know how to survive. And thanks to “The Pen,” they know a very satisfying name to bellow.