Sure, the president's 1040 from 12 years ago is news — but Maddow’s shameless trolling suggests a deeper problem 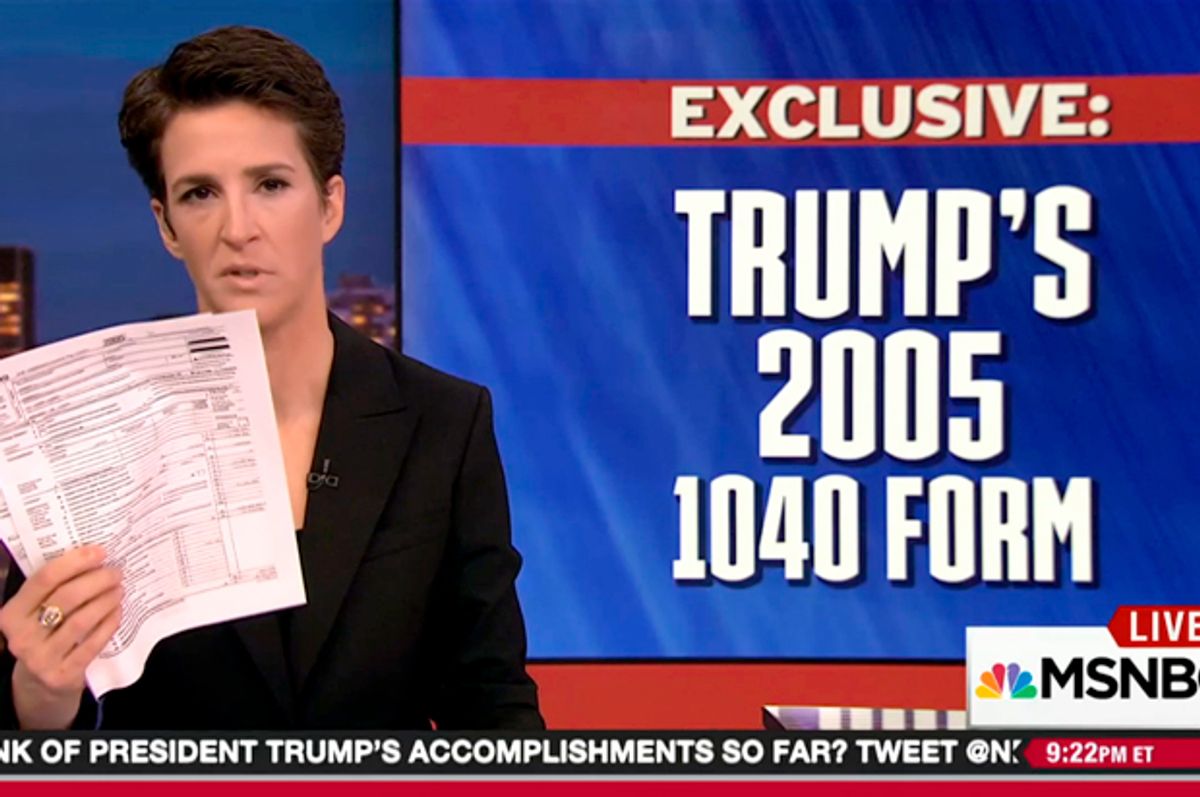 The ancient Greeks believed that people who had incurred the wrath of the gods would soon become mentally unfit. “Whom the gods wish to destroy, they first make mad,” a saying goes.

Before Tuesday night's broadcast, Rachel Maddow should have spent some time reading some Sophocles.

At around 7:30 p.m., the MSNBC host told her Twitter followers, “We’ve got Trump’s tax returns.” She promised to unveil them less than two hours hence.

That’s not quite what happened.

Despite the huge hype on social media (Rachel Maddow was the No. 1 topic on Twitter soon thereafter), viewers of “The Rachel Maddow Show” were not treated to an exhibition of the financial documents that journalists worldwide have been salivating over. Instead, after a 20-minute meandering monologue preceded by a commercial break, they were shown two pages of Donald Trump’s 2005 1040 form.

Who knows whether Trump ended up paying that amount in other years? But Tuesday’s “Maddow” episode certainly warmed the cockles of Republican hearts everywhere.

“Please tell me someone has a meme of someone pulling the pin on a hand grenade & throwing the pin instead of the grenade?” tweeted the president’s son, Donald Trump Jr. He continued his mockery throughout the night and into Wednesday with dozens of tweets and retweets. Nor was he alone in his mirth, as pundits both on the left and right compared Maddow to Elmer Fudd smoking an exploding cigar or TV host Geraldo Rivera opening Al Capone's safe and finding nothing within.

Still, while Maddow’s report didn’t nearly live up to the hype, it’s not quite fair to single her out for telling everyone she finally had the secret that was going to bring an end to Donald Trump.

In truth, many politicians and media figures have promised as much for the entirety of the president’s very short political career. In fact, hoping and dreaming that Trump would finally be destroyed by his own mouth or by a hardworking reporter was literally the campaign strategy for the Republicans who ran against him in last year’s GOP primaries. Despite what had just happened to the likes of Jeb Bush and Ted Cruz, in the general election Hillary Clinton essentially ran with the same game plan.

Even now, two months into Trump's term, leading liberals still haven’t figured out that the reason he is now the president is because millions of union members and many left-leaning nonvoters decided to show up for him. And it wasn't just white voters. Trump actually improved on the GOP’s numbers among blacks and Latinos, when compared with 2012 Republican nominee Mitt Romney's results.

Progressives who want to win these people back won’t do it with snarky news summaries and sarcastic obsessions about Scotch tape. They’ll do it by focusing on policy. As I’ve written before, Donald Trump has discovered the “one weird trick” about politics: He convinced just enough Americans living in just enough states that he cared about their problems.

Democrats have long insisted that Trump’s concern for the poor and middle class is phony. But their collective reversal on the Trans-Pacific Partnership shows that they at least partially recognize that some policies they once favored could be harmful to regular Americans and politically toxic. They would do well to consider if there are others.

The president’s endorsement of the congressional GOP’s health care plan, which will increase costs for many Americans — especially those who voted for Trump — and his refusal to stop state-level Republicans from blocking minimum wage increases would certainly seem to give the lie to his pretensions of caring for “middle America.”

As it is, however, many leading liberals appear to be more interested in making fun of Donald Trump’s hair or mocking the educational attainment of his voters.

What was that old line about doing the same thing over and over again and expecting different results?