Fans wanted a death to cry over. What they got was a disappointing story about the losses that don't kill us 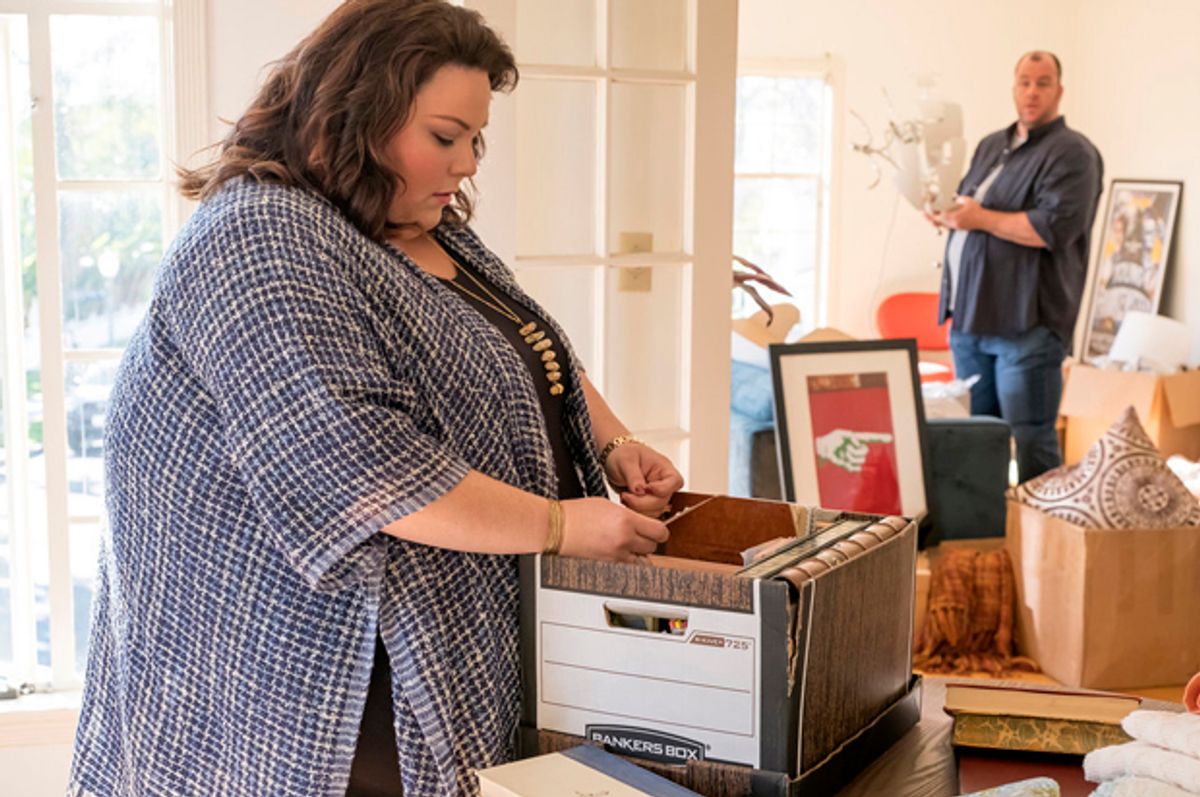 How strange it is that in this apprehensive age, NBC's wholehearted “This Is Us” somehow ended its run as the second most popular new series of the season so far. Maybe its ascension isn’t surprising to the millions of viewers who tuned in throughout its first season, which ended Tuesday night. But think about it: This is a broadcast drama that doesn’t revolve around crime, danger, gunplay or explosions.

Terrible events befall the Pearson clan; that’s just how life works. If the harshest critique viewers can make about the season finale of their show, however, is that a shady poker game ground the energy to a halt, that’s fairly mild in the larger scheme of things.

Set against other series ranked alongside it in Nielsen’s Top 10 (which includes “NCIS,” “Bull,” “Blue Bloods” and “NCIS: New Orleans”), “This Is Us” is a staid family drama that ponders all-too-basic questions about life (Who are we? What are we worth? Where are we going?) framed by creator Dan Fogelman’s emphasis on feelings-forward narratives.

But make no mistake, its tensions are all too real — much more those fueling open-and-shut crime cases. Procedurals traffic in visceral thrills while the action in “This Is Us” resembles the day-to-day conundrums the average person contends with, the specter of loss being chief among them.

And if there is one element of “This Is Us” that explains its popularity with such a large segment of America, it is the show’s solemn treatment of loss and losing. Throughout the season the story’s vitality has been buoyed by revelations that play as twists, many connected in some way to our universal fear of death.

This begins in the series debut, when young parents Jack (Milo Ventimiglia) and Rebecca Pearson (Mandy Moore) lose one of their triplets in childbirth but decide to adopt Randall, an African-American newborn left in the hospital on the same day as their surviving triplets Kevin and Kate come into the world.

The 36-year-old adult Randall (Sterling K. Brown) tracks down his father biological father William Hill (Ron Cephas Jones) and immediately rebukes him, only to be surprised by the tenderness and acceptance of the frail man who happens to be living out his final days. Randall’s sibling Kate (Chrissy Metz) opens her heart to a man who collapses and has to be rushed to the hospital during a holiday gathering. (He lives.)

Their brother Kevin (Justin Hartley), an actor who is struggling to relaunch his career after a stint on a lowbrow sitcom, only improves as a performer after he allows himself to genuinely mourn a lost loved one.

Everything comes back to their father Jack, the man who had strived to make Randall feel connected to his cultural identity even as he fiercely claimed him as his son, who let his obese daughter Kate know she was adored and beautiful, who built models with Kevin to give him equal time and affection. Jack was always present even if he wasn’t actually there. Viewers discover early on that Jack, who is shown only in flashbacks to the 1980s and 1990s, died when Randall, Kate and Kevin were younger.

This central emphasis on loss made the buzz surrounding “This Is Us” somewhat off-putting at times. “#ThisIsUs finally delivered the death you’ve been waiting for!” effused Us Weekly in a morbid if upbeat tweet (that was quickly deleted) following the drama's acclaimed Feb. 21 episode, featuring the demise of a prominent beloved character.

Season 1’s constant emphasis on departure and tears made expectations high that Tuesday night’s season finale would zoom in on Jack’s death, and the penultimate episode teased that possibility, showing Jack hitting the highway to see his wife perform at a club two hours away, gulping down beers all the while.

This time the twist is that in the finale Jack does make it to the club, living to fight — a few hours later with Rebecca.

Centering this episode on Jack and Rebecca's youth in the 1970s and raising a family in the 1980s and '90s instead of on their kids in the present day breaks from the usual “This Is Us” format. Shuffling from views of what the Pearson family's life was like back then to what it looks like today lets us see how Jack and Rebecca molded the Randall, Kevin and Kate into the adults we’ve cried about since last fall.

And if the choice wasn’t entirely successful, that’s in keeping with the season. “This Is Us” is a good show that has the potential for greatness but never quite gets there in season 1, though it comes close with Feb. 21’s “Memphis” episode. An obligation to follow shallow storylines about Kate’s weight struggles and Kevin’s artistic angst holds it back from perfection. The finale’s dissection of Jack and Rebecca’s marriage doesn't help much either.

Instead, the heavy lifting of season 1 fell to Randall, tenderly portrayed by Brown as a gentle family man and successful businessman shuddering under the pressure that accompanies being a model minority.

As the only black child in a white world, he imposes a level of perfection upon himself that gives him crippling panic attacks. As an adult, he channels that frenetic energy into a demanding and unfulfilling job while taking care of William, and all of that nearly breaks him.

Randall’s plot becomes the primary conduit by which viewers get to know Jack and Rebecca, mostly seen as a stable happily married couple who raise their family as best they could — even as Rebecca harbors an important secret that splits her from Randall for a time.

Jack and Rebecca were once children, too, and in with the drama's taking us back to their youth, we see the ways that Jack spent his adulthood breaking the patterns set in place by a flawed upbringing at the hands of an abusive alcoholic father.

The season finale and episodes prior to it demonstrate the effort it took for Jack and Rebecca to hide the fissures in their marriage. So in making the couple the focus and dancing between the 1970s, when they met, and years later, when their marriage ruptured, the finales explores a different type of loss.

For a 28-year-old Jack it’s the last vestiges of childishness that vanish, blown into the wind once he enters that card game and almost heads down a bad road, if not for a chance encounter with the woman who becomes his wife. Rebecca, meanwhile, relinquishes her dream of a singing career, which she gives up for marriage and children and delays again later when Jack shows up to her gig angry and drunk.

Jack’s poker game is a disappointing diversion that contradicts several core elements of the character the writers build up throughout the drama’s first season. Because of this the main losers are “This Is Us” viewers.

But the fight that shook up the family echoes one that millions of people have had at some point when Jack and Rebecca accuse each other of undervaluing their contributions to their marriage. Rebecca admits out loud that a decade and a half of parenting has left her unsatisfied. Jack retorts that he supports the entire household and receives no appreciation for it. He sleeps on the couch, and in the morning, they agree to separate.

When the drama's finale didn't deliver on its hint of fresh despair of the fatal variety, some corners of social media simmered with disappointment, which is a bizarre. Jack is a character most people would want to live for as long as possible, even if it’s only in memories.

The only reason someone would ache to witness how Jack shook hands with the reaper is to experience the kind of revitalizing ugly cry that unburdens a person’s soul.

No other series has served as such a reliable catalyst for damp-eyed catharsis, and in any other season that would have made “This Is Us” a joke. But in the 2016-2017 season, it turns out that a weekly weep was that mysterious balm a divided America didn’t know it needed.

NBC has already picked up “This Is Us” for a second and a third season, meaning Fogelman and his writing staff will have time to work on the drama’s shortcomings. Maybe they’ll lend a little more tragedy to Kate's and Kevin’s lives, and shift the show’s focus to the jagged tests that come with living. Suffering won’t build these characters as effectively as solid writing, of course, but it does work the tear ducts to a satisfying degree.