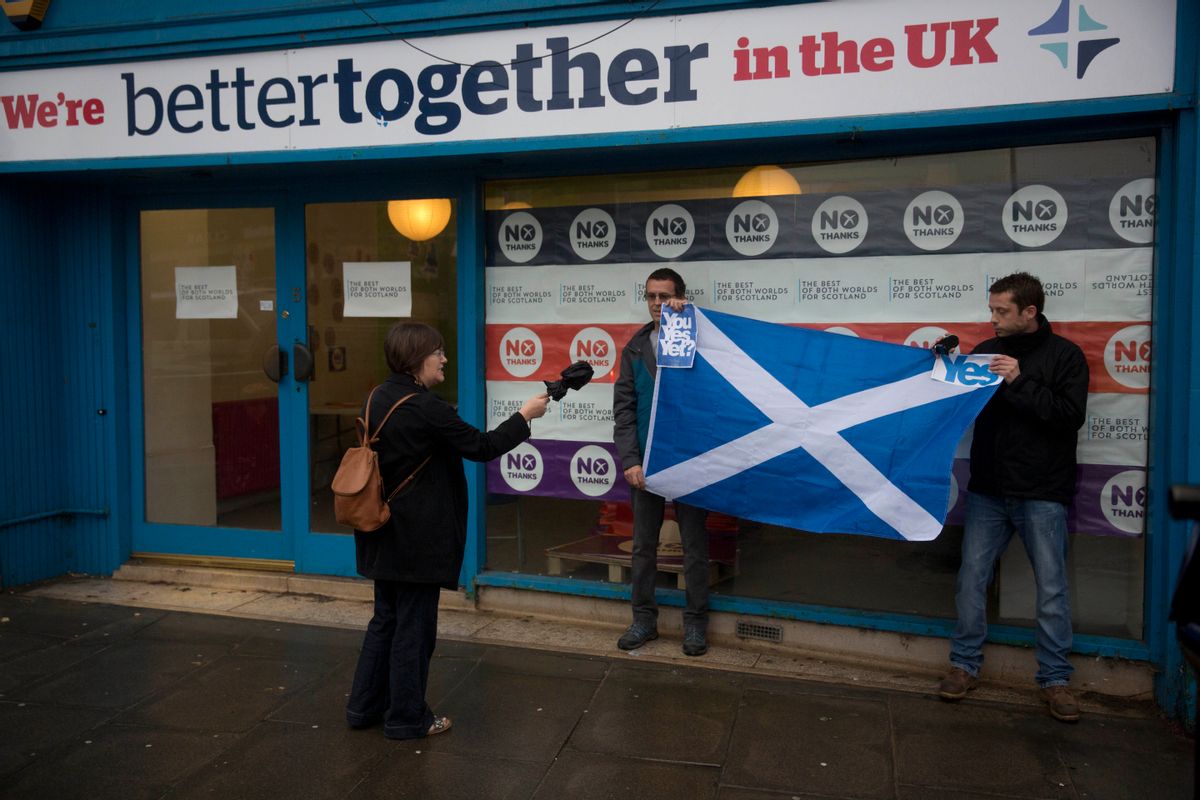 A passerby argues with two Scottish independence referendum 'Yes' supporters holding a Scottish Saltire flag outside the "Better Together" No campaign offices in Edinburgh, Scotland, Monday, Sept. 15, 2014. If Scottish voters this week say Yes to independence, not only will they tear up the map of Great Britain, they'll shake the twin pillars of Western Europe's postwar prosperity and security  the European Union and the U.S.-led NATO defense alliance. () (AP Photo/Matt Dunham)
--

No one can say the English weren’t warned.  As reported by the Associated Press:

Scotland’s leader delivered a shock twist to Britain’s EU exit drama on Monday, announcing that she will seek authority to hold a new independence referendum in the next two years because Britain is dragging Scotland out of the EU against its will.

Anger in Scotland over Brexit is already high, which voted heavily to remain.  Yet the notion of a second round of voting for secession is not entirely welcome, as reported by the Daily Telegraph, a pro-Brexit paper.  Already a contentious experience, another Scottish referendum may be a bridge too far for Scottish voters who are still unclear about what Brexit will mean for them.

This is a tale as old as time: local elites are taking advantage of a weakened central government to try to upgrade their positions.

But while England more firmly subdued Wales for a much longer time period, the English never did fully conquer Scotland.  Rather, through a 17th century trick of dynastic politics, the English managed to get Scotland by giving their throne to a Scottish king, James I.  A century later, the two nations’ parliaments decided to unionize in 1707, forming the United Kingdom of Great Britain.

The UK was a boon to Scotland so long as the Scottish had access to everything that made Britain great: its colonies, its captured imperial markets, and its powerful navy.  Scotland’s capital and largest city, Edinburgh, still has an architectural core that reflects this imperial period.  As the empire fell, many of those imperial functions were replaced by the European Union.  Thus withdrawing from the EU threatens the prosperity that Scotland expects from its political submission to England’s British project.

The takeover of Scotland through dynasty and law has helped produce an intensely legalistic political culture in the UK, meaning that uprisings occur through courts and referdums rather than battlefields.  Scottish elites in the Scottish National Party are hoping they can promote themselves to the heads of their own state, which of course benefits them immensely while exposing them to very little risk.  The worst that can happen to them is losing an election, an eminently survivable experience.

Moreover, the British central government is weaker than it’s ever been since at least the English Civil War in the 17th century.  It’s not merely the self-inflicted wound of Brexit: it is also the English nationalist populism siphoning state power, the decade-on-decade disarmament of the British military, and the shifting of global power further and further from old colonial powers and more to China, Germany, and the United States.

This is a fine opportunity for ambitious elites to challenge a government not particularly able to defend itself.  But since their victory must be electoral, they must now try to convince their own people – yet again – that Scottish independence will benefit citizens as well as the elite.