The president will save moms and miners from "Sesame Street" to give them what they really need: more fighter jets 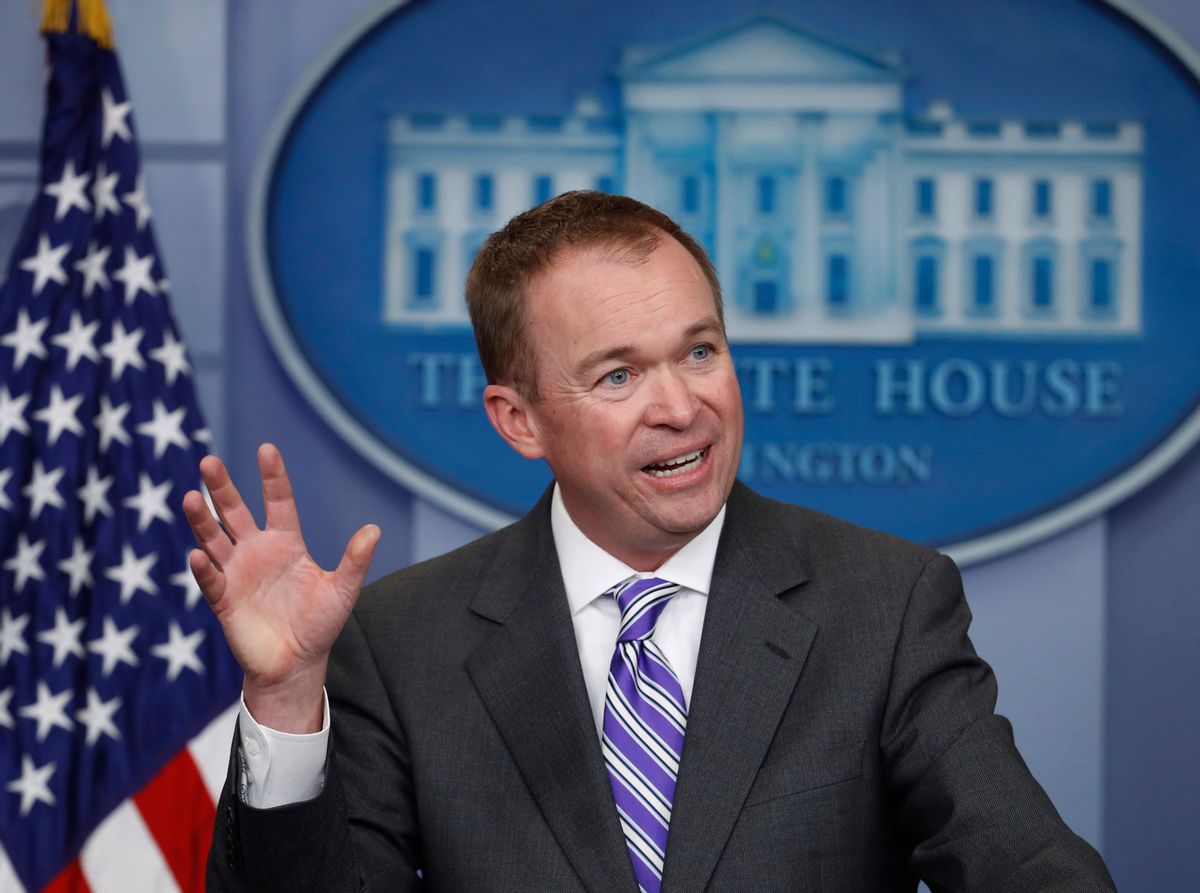 FILE - In this Feb. 27, 2017 file photo, Budget Director Mick Mulvaney speaks to reporters during a daily press briefing at the White House in Washington. Republican leaders embarked on an ambitious plan Tuesday to try to sell their new health care proposal to rank-and-file lawmakers and the public, absent specifics on costs or how many Americans will be covered. (AP Photo/Manuel Balce Ceneta, File) (AP Photo/Manuel Balce Ceneta, File)
--

President Donald Trump’s first budget proposal is, to quote Sen. Bernie Sanders, I-Vt., “morally obscene and bad economic policy.” The White House’s proposal calls for deep, gouging cuts to every agency that isn’t explicitly military related. The departments that oversee environmental policy, international relations, education, housing, health care and agriculture are all to be hollowed out so that more immigrants can be deported, more bombs built and more fencing constructed on the southern border.

Trump’s “America First” budget blueprint will not pass Congress in its current form, but it lays out in red and black ink the policy priorities of the administration. The director of the Office of Management and Budget, Mick Mulvaney went on MSNBC’s “Morning Joe” on Thursday to explain how the administration shaped these priorities: “One of the questions we asked was, Can we really continue to ask a coal miner in West Virginia or a single mom in Detroit to pay for these programs?” Mulvaney said. “The answer was no. We can ask them to pay for defense, and we will. But we can’t ask them to continue to pay for the Corporation for Public Broadcasting.”

This is straight nonsense from start to finish. Trump's budget cuts all federal funding for the Corporation for Public Broadcasting, which has long been a bugbear for fiscal conservatives not because it’s an onerous drain on the federal budget, but because they perceive it to be a source of liberal indoctrination. You might remember that funding for public broadcasting came up during the 2012 presidential campaign when candidate Mitt Romney promised to reduce all federal financing of the corporation. As ProPublica noted at the time, trimming federal Corporation for Public Broadcasting funding would have saved the average person a whopping $1.35 per year.

Holding up the Corporation for Public Broadcasting budget next to an already bloated defense budget (that Trump plans to bloat still further) and say one is a necessary cost while the other is unjustifiable is ridiculous. Costs for public broadcasting are tiny and the share of it paid for by the people Mulvaney referenced is absurdly small. The Washington Post did the math and found that less than one cent of a West Virginia coal miner’s taxes goes to public broadcasting. And I guarantee you that a Detroit single mom draws more of a direct benefit from her minuscule investment in "Sesame Street" than she does from, say, a few more F-35 joint strike fighters. But the Trump administration’s priorities are such that the tax dollars of single mothers and coal miners are better spent on munitions for Saudi Arabia to drop on Yemeni civilians.

Let’s move beyond public broadcasting to some other budget items that, per Mulvaney, single moms and coal miners must have their tax dollars rescued from. The Trump budget would trim $200 million from the Women, Infants, and Children supplemental nutrition assistance — precisely the sort of government program a low-income single mother in Detroit would rely on to feed her kids. WIC is a hugely successful program that helps increase birth weights and provides better childhood nutrition. It has historically been run quite efficiently, with less than 10 percent of spending going toward administrative costs.

Mulvaney’s coal miner in West Virginia is already looking at a hard future, given that economic forces are steadily eroding the viability of the Appalachian coal industry. Trump has promised to revive the Appalachian coal industry by all but eliminating the Environmental Protection Agency, but gutting the EPA won’t put more coal in the ground, nor will it convince mine operators to abandon automation. As coal jobs disappear, miners in West Virginia and other states in the region are going to need to find new work. The Appalachian Regional Commission, a state-federal partnership that helps promote economic opportunity in the region, works in West Virginia and elsewhere to train low-income workers and invest in the local economies. Trump’s budget would eliminate funding for the Appalachian Regional Commission.

Again, it’s unlikely that Trump’s budget blueprint, as it currently exists, will pass Congress. But if it did, a single mom scrimping to buy baby formula and an out-of-work miner pounding the pavement for a job that doesn’t exist will nonetheless be comforted knowing that their tax dollars went to Lockheed Martin instead of Elmo.