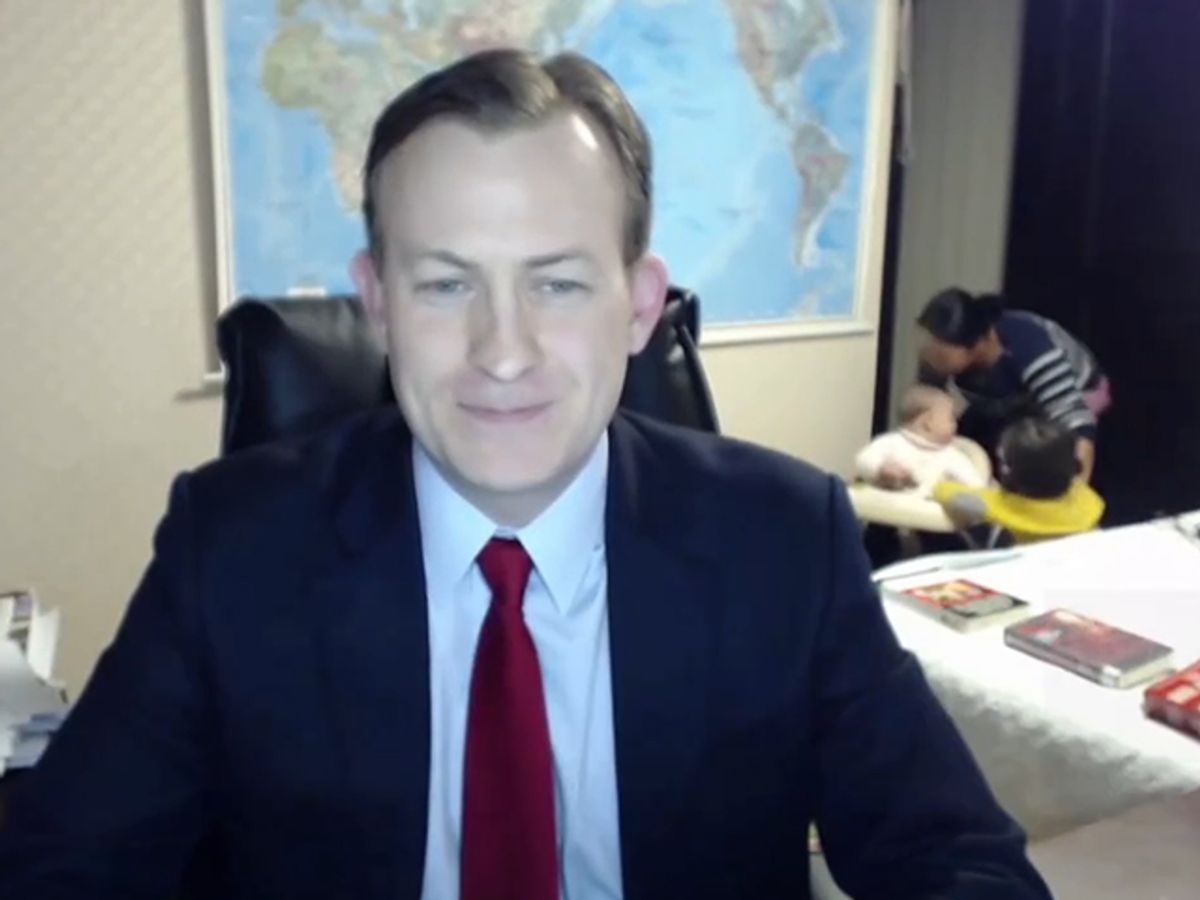 Videobombs make live television way more interesting. From not letting LeBron James get through a postgame interview to magicians showcasing their talents, the unpredictability of such moments have given unsuspecting viewers loads of laughs.

Robert Kelly, a political science professor at Pusan National University in South Korea, knows this now better than anyone.

Kelly was a guest on BBC World News on Friday where he discussed the impeachment of South Korean President Park Geun-hye. Kelly was working from his home office and forgot to lock the door behind him. Within moments of starting the Skype interview, Kelly’s 4-year-old daughter Marion strutted joyfully through the doorway wearing a bright yellow shirt, excited about a party at school that day, and took her place next to her father’s side. Seconds later, 9-month-old James barges through the door in his walker, determined to not let his big sister be the only sibling who gets to be on TV with dad.

“Then I knew it was over,” Kelly told The Wall Street Journal, but the fun was only just getting started.

After James makes his entrance, Kelly’s wife Jung-a Kim barrels in the office as she slides across the floor. She rounds up the kids in a frenzied panic and gets them out the office as quick as possible. The last image we see of Kim is her on her knees reaching for the door handle and shutting it so Kelly can finish the interview. During the whole ordeal, Kelly kept his gaze on the camera, stating multiple times that he was apologetic for the intrusion.

At first, the family was “mortified” the incident would cast a negative image of Kelly professionally and the family in general, but the interview has gone viral and praised by some as one of the funniest moments in television history.

The Kellys were invited back by BBC on Tuesday to talk about the aftermath of the interview. The family said they are happy people found humor out of the situation.

“We watched it multiple times, too, and our families have watched it as well. Everybody we know seems to think it's pretty hysterical,” Kelly told BBC’s James Menendez. “It was sort of catching a regular family off-guard and stuff. It's funny.”