Behind the Western land war: How the fringe ideology of anti-government cranks is becoming the GOP mainstream

Nutty right-wing theories meet the fossil-fuel industries, and the result is an all-out war on public land 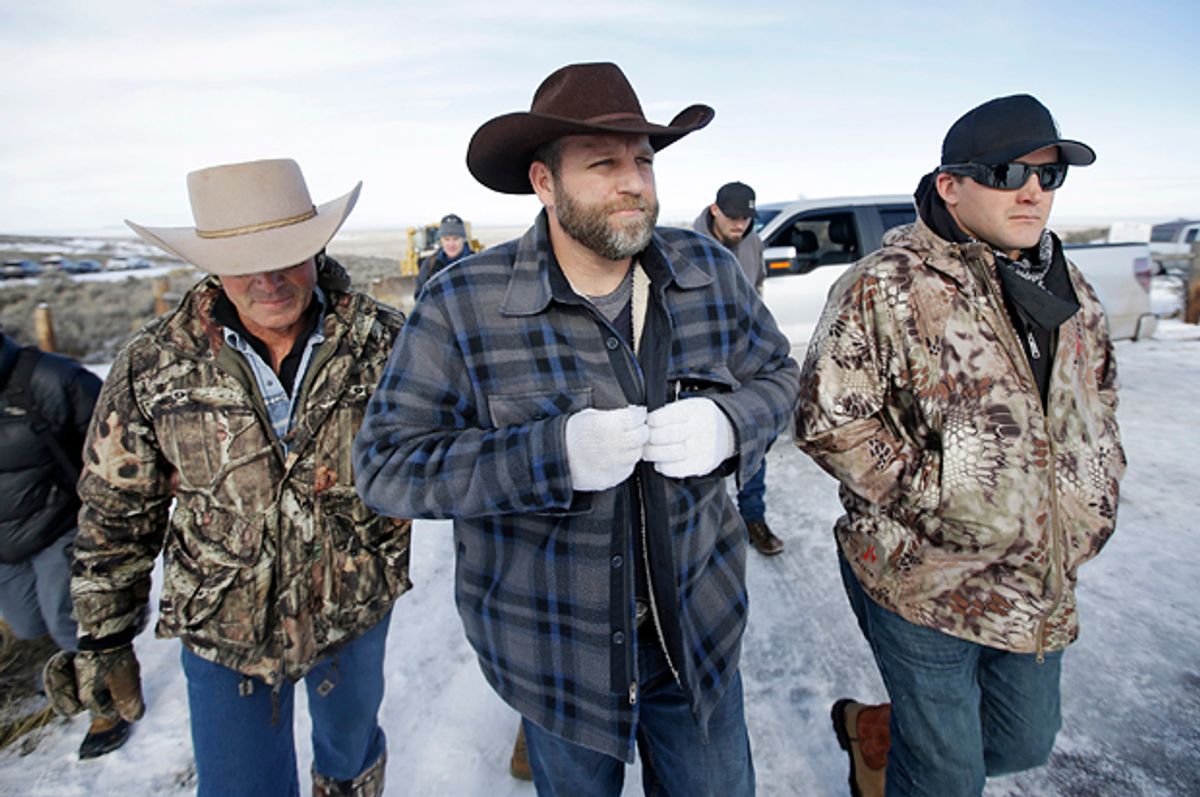 When a group of incoherent right-wing radicals — led by the infamous Bundy brothers, Ryan and Ammon — took over the Malheur National Wildlife Refuge in Oregon last year, they were largely understood in the mainstream media as a bunch of fringe characters. Their politics were ramshackle, their demands were incoherent, and they seemed more fueled by some muddled white Christian conservative identity politics than by a cohesive ideology.

But while the Bundys and their friends were correctly written off as a bunch of rambling jackasses, their hostility to the previously uncontroversial notion that the federal government has a right to own and control land in the Western United States has become, ever so quietly, a popular opinion among congressional Republicans.

A closer look at what's going on suggests that this public land issue is a good example of the way formerly marginal ideas can move into the mainstream of the Republican Party. Corporate interests and right-wing ideologies interact, feeding off each other and work to push the entire party ever further to the right.

This week, the Center for Biological Diversity, a nonpartisan environmental nonprofit, released a report flagging the 15 members of Congress — nine House members and six senators — it considers most hostile to federal ownership of land.

The 15 were chosen on the basis of how many bills they had introduced or co-sponsored that, according to the center's press release, are designed "to seize, destroy, dismantle and privatize America’s public lands" — almost exclusively in ways that will make it easier for oil, gas and other extraction industries to drill or mine on the lands at below-market rates. Unsurprisingly, all 15 of the members of Congress are Republicans.

The bills vary in intent, from those that seek to weaken environmental protection laws to those that would strip the federal government of its right to create new parks and wildlife refuges. But all of them represent eye-poppingly radical assaults on clean air, public parks and other good things that Americans take for granted.

The report also flags something else that should disturb readers: Much of this move to attack public lands is being justified in terms of far-right ideology, of exactly the kind the Bundy family was espousing.

Two of the senators in the report, Sen. Mike Lee and Sen. Orrin Hatch, both from Utah, are strongly influenced by a theocratic crank named W. Cleon Skousen, whose work in the mid-20th century underpins a lot of contemporary hostility toward the federal government, especially among Mormons.

Skousen, Alexander Zaitchik wrote in a 2009 Salon article,"was too extreme even for the conservative activists of the Goldwater era," but has surged in popularity in recent years. Glenn Beck embraced Skousen's work, causing his 1981 book, "The 5,000 Year Leap," to reach No. 1 on Amazon in 2009. Conservatives embraced his work because it helped justify pushing for a more theocratic government, even in the face of  the clearly secular language of the U.S. Constitution.

"[Skousen's book] argues that the U.S. Constitution is a godly document above all else, based on natural law, and owes more to the Old and New Testaments than to the secular and radical spirit of the Enlightenment,"  Zaitchik wrote.

More recently, Skousen's work has been flogged by the Bundys and others, even members of Congress, to justify opposition to federal control of Western lands, according to Randi Spivak, the public lands program director for the Center for Biological Diversity.

“These ideologies are very narrow-minded, very anti-federal government, very anti-anything that tries to constrains unfettered industry," she said in an interview.

The weird thing, Zaitchik said over the phone, is that Skousen, who died in 2006, didn't really address the issue of public lands. During his lifetime, public land ownership was not particularly controversial, even in right-wing circles.

“The public lands stuff he was kind of recruited for after he died, as a figurehead, because it fits nicely with his whole worldview, which I guess you’d call theo-constitutionalist," Zaitchik said.

Not that Zaitchik believes Skousen would be offended at how his work is being flung around as ideological justification for this growing movement to end or curtail federal land control. “His worldview dovetails nicely with the Koch brothers' interest in the public lands fight," Zaitchik said.

That gets to the heart of why this public lands fight is about a lot more than how our taxpayer-owned lands are handled, as important as the issue is. It's a snapshot of the right-wing ecosystem that illustrates how once-fringe ideas become mainstream on the right — and then start becoming law.

One of the major reasons that increased attention is being paid to the public lands issue is that, as Zaitchik noted, energy billionaires Charles and David Koch, as well as other rich libertarian-minded people, have been heavily funding front groups like the American Legislative Exchange Council, Americans for Prosperity and the American Lands Council to spread the idea that federal land control is somehow un-American.

It's not hard to see why energy barons like the Kochs are interested in this issue. A huge amount of fossil-fuel energy could potentially be extracted from public lands. In recent years, concerns over climate change, the popularity of outdoor sports and increased awareness of the historical and environmental importance of these lands has turned public opinion against the idea of letting industry run rampant over them.

These changes threaten the extraction industries, especially their ability to obtain leases on federal land easily and cheaply. During the Obama era in particular, federal agencies were slowly but surely making it harder for corporate interests to mine and drill wherever they wanted. Subsequently, libertarian groups have increased their spending on propaganda to convince conservatives that conservation efforts on federal land represent some kind of radical power grab.

The "let us tear up the beautiful landscape on the cheap so we can make more money" argument, while it may be compelling to oil barons, is not particularly enticing to the public at large, even among conservative populations.

Instead, what's happening is that groups like American Legislative Exchange Council and the congressmen who echo their claims borrow ideas and language from right-wing ideologues like Skousen. The goal, presumably, is to sound like champions of some old-school religious view of government's role, rather than a bunch of greedy corporate types who are looking to maximize their profits.

You won't hear someone like Sen. Mike Lee say, for instance, that he thinks oil profits matter more than slowing climate change or preserving our lands for future generations. Instead, he whips out Skousen-inflected arguments, such as claiming to oppose "the unauthorized federal occupation" of Western lands or he insists that he's all about defending "the text and the original understanding of the Constitution."

Maybe Lee believes this stuff or maybe it's just a feint. Either way, it's a clever way to package the interests of the energy industry and sell them to the conservative public as backed up by high-minded principles.

Unfortunately, the strategy is working, at least among congressional Republicans. Many of them probably couldn't tell you who Cleon Skousen was, but the idea that there's some fundamental principle at work behind the objections to federal land control is spreading rapidly from these 15 notorious members to the entire Republican caucus.

Just last week, the Senate passed a bill, backed by nearly all the Republicans, that ended Obama-era regulations that would have made it easier for members of the public to put limits on drilling and mining on public lands.

Randi Spivak flagged the irony of this, pointing out that anti-federal land forces often claim to want local control over the lands, but just passed a bill that seems to do precisely the opposite, by shutting local people out of decision-making process.

"Really, do you want local voices? No, we think you want industry voices," she asked rhetorically.

But as the Bundy debacle shows, this dispute has never been about intelligible or coherent ideology. The anti-federalist posturing is just there to create the illusion that some democratic principle is at work. In the end, it's about shoving the needs of the public aside to increase profits for the energy industry.