Tillerson leaves South Korea event early due to "fatigue," but U.S. media isn't there to report

The one U.S. reporter in South Korea, from IJR, hasn't filed a report; that site retracted its Thursday Obama story 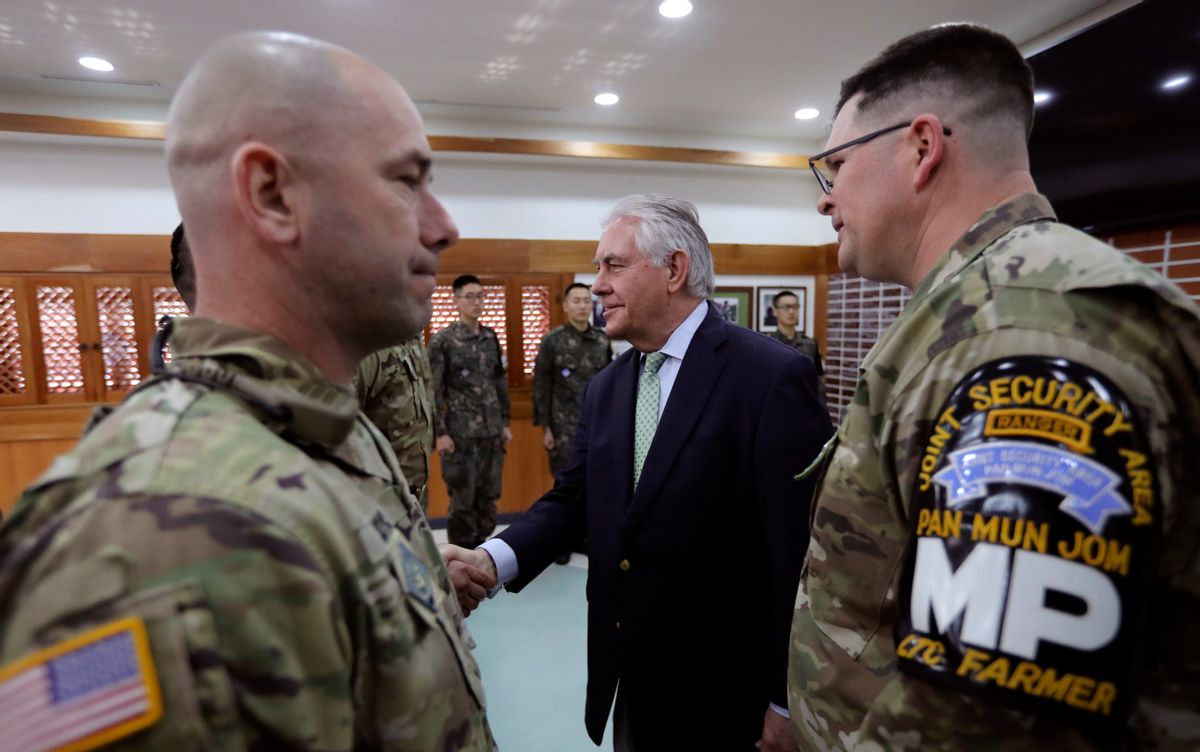 South Korean media reported on Friday that U.S. Secretary of State Rex Tillerson skipped out on gathering with his Korean counterparts due to "fatigue." But the only American news outlet aboard Tillerson's first diplomatic mission did not report on the development, further ramping up scrutiny of the State Department's decision to leave the U.S. media virtually in the dark.

Erin McPike, a journalist from the conservative-leaning website Independent Journal Review, was the only reporter invited on Tillerson's trip to Asia — an exceedingly unusual development. According to IJR founder Alex Skatell, McPike received the highly coveted spot because of her “tenacious, detailed brand of reporting.” McPike, however, is not functioning as a pool reporter during the trip and will not provide daily insights into Tillerson's trip. Instead, she's reportedly accompanying the secretary of state for an upcoming profile of Tillerson.

“There is an elevated concern in the Japanese media about that level of control” that Trump is trying to exert on the U.S. news media, Tamaki Tsukada, spokesman for the Japanese Embassy in Washington, told The Washington Post this week.

IJR did find it necessary to cover former President Barack Obama's trip to Hawaii this week, however, publishing a story titled "Ex-President Obama Made 'Surprise Visit' to Hawaii, Just Days Before Judge Issued Travel Ban Ruling." The publication suggested Obama's visit to Hawaii was related to a judge's decision to halt Trump's executive order barring individuals from six Muslim-majority countries from entering the U.S. The story also noted that the judge was Obama's classmate at Harvard University and that the former president ate a restaurant near the judge's federal courthouse.

"This is not to allege the former president met with Judge Derrick Watson, but merely to point out the timing and the opportunity was there ahead of a controversial court ruling," according to IJR reporter Kyle Becker.t

IJR's congressional reporter Joe Perticone resigned on Thursday and the prominent right-wing website retracted the Hawaii story and issued the following editor's note: "This story has been updated to remove unnecessary speculation about the timing of the visit. We apologize for any undue conclusions that might have been drawn from the report."

Meanwhile, Tillerson is on a tour in Asia meeting with various nation heads. The secretary of state has been criticized for his lack of transparency, made more apparent when he decided to only invite one journalist on the trip with him. On Friday Tillerson visited the demilitarized zone near the inter-Korean border and had lunch with soldiers. But the Korean Herald reported that his day of activities was cut short due to "fatigue" and he was unable to visit the U.S. embassy. "Meanwhile, Tillerson’s shortened diplomatic consultations and public events in Seoul spawned a flurry of speculation given a leadership vacuum and political uncertainties," the Korean Herald noted.

Exhaustion could not have come at a worse time for the former CEO of Exxon Mobil, as President Donald Trump sent out a tweet attacking North Korea.

North Korea is behaving very badly. They have been "playing" the United States for years. China has done little to help!

As the president flips the script with U.S.-North Korea relations, one has to wonder if a fatigued Hillary Clinton would have handled this better.