If the Affordable Care Act is repealed, expecting mothers may have an even harder time getting maternity coverage 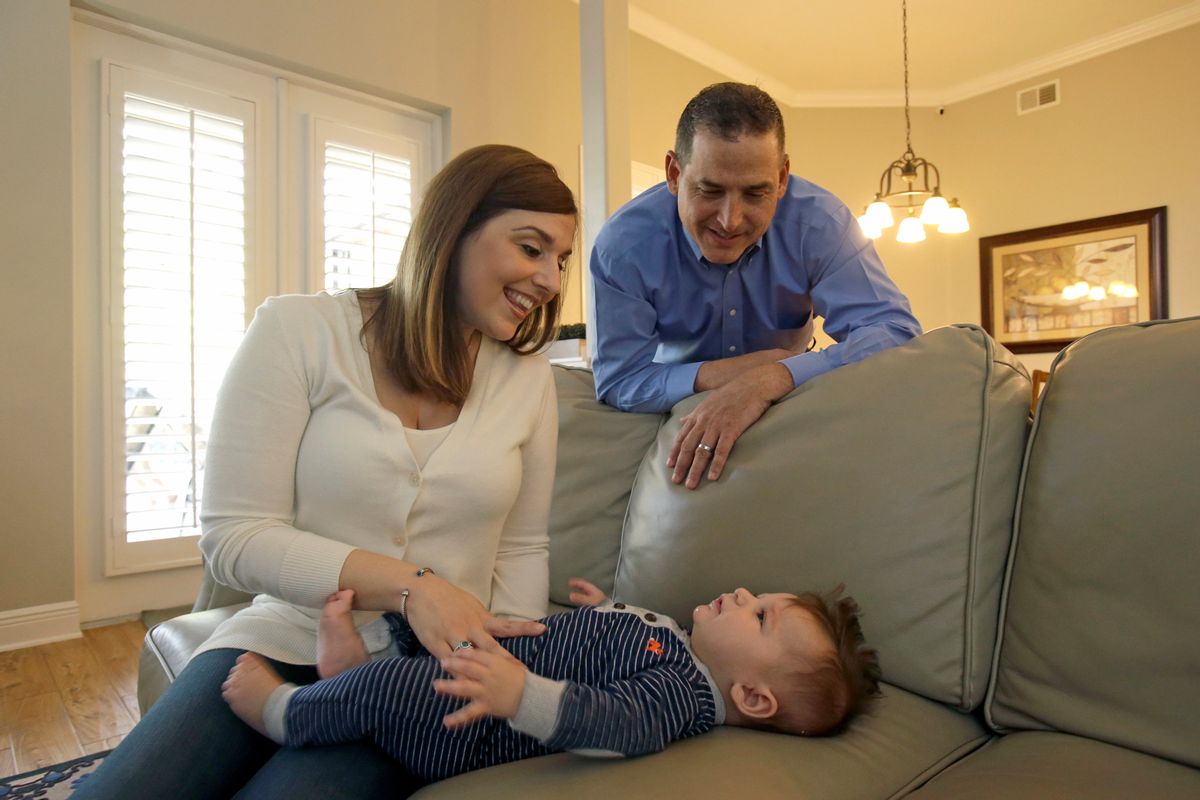 In this Tuesday, Feb. 7, 2017 photo, Lauren Nieves-Taranto, left, and husband Francisco play with their youngest child Nicolas, 4-months, at their home in Windermere, Fla. Nieves-Taranto covered the entire $8,000 bill from the birth of Nicolas last year with his account balance from a health savings account, or HSA. () (AP Photo/John Raoux)
--

Christie Popp, who is pregnant with her third child, is hoping hard that the maternity coverage she has through the Affordable Care Act doesn’t go away.

That coverage is written into the health law as a requirement for every plan sold on the individual market. But that could change if Republicans get their way to repeal the ACA and remake health care.

Popp knows firsthand how difficult it was to find such coverage before most of the federal health law’s provisions took effect in 2014. When the 37-year-old lawyer from Bloomington, Ind., had her first child in 2011, she had health insurance through her job at a nonprofit legal clinic. Because the insurance carried a high deductible, she and her husband paid $6,000 out-of-pocket during the pregnancy and delivery.

By 2013, when her second son was born, she’d moved to individual coverage purchased after setting up her own practice. “It was really bad insurance, and it was really expensive,” she said. What’s worse, to add pregnancy coverage to the policy, she would have had to start paying extra premiums — generally hundreds of dollars a month — for a so-called maternity rider long before she got pregnant. “So you had to really plan in advance to take advantage of that,” which they hadn’t, she said. To lower their out-of-pocket expenses, she and her husband decided to have a home birth with a midwife, though she still paid thousands of dollars to the physician she used as a backup.

For baby No. 3, the couple’s calculations will be different, she said: “This time I have real good coverage, so it’s great.”

If it lasts, that is.

Republicans say they want to jettison the maternity coverage requirement, which is part of the ACA’s list of 10 “essential” benefits. It’s a valuable benefit, and removing it outright won’t be easy since it would take complicated maneuvering in the Senate to do so. It remains intact in the bill moving through Congress, but that is due to budget rules, not because Republicans want to keep it.

The total price charged for pregnancy and newborn care ranges widely but averaged about $30,000 for a vaginal delivery and $50,000 for a cesarean section, with commercial insurers paying out an average of $18,329 and $27,866.

Still, the idea of the federal government requiring insurers to offer types of coverage is anathema to many Republicans averring it interferes with companies’ and patients’ choice.

“We’re going to repeal ObamaCare once and for all, and eliminate its mandates, taxes, and intrusion into your businesses and your lives,” tweeted Vice President Mike Pence on Feb. 25.

We’re going to repeal ObamaCare once and for all, and eliminate its mandates, taxes, and intrusion into your businesses and your lives. #RJC

Seema Verma, the consultant on private health insurance who was nominated to head the agency that oversees the health law, said at her Senate confirmation hearing Feb. 16 that she does not necessarily support keeping maternity care as a requirement for insurance plans.

“Women have to make the decisions that work best for them and their family,” she said. “Some women might want maternity coverage, and some women might not want it.”

Backers of the coverage requirement say that’s a fundamental misunderstanding of how insurance works.

And making maternity coverage optional can raise costs not just for pregnant women and their families but society at large.

“People become more expensive when they don’t get the care they need,” said Ness. For example, “if you don’t provide good prenatal care, that leads to worse outcomes” for both mother and baby.

Before the Affordable Care Act made maternity coverage mandatory in the individual market, most plans did not cover it. “Only 12 percent of plans on the individual market covered maternity” before the health law, said Janel George, director of federal reproductive rights at the National Women’s Law Center. “So women were saddled with having to pay for this because insurance companies didn’t have to.” Although many plans offered optional maternity riders, these could cost close to $1,000 per month. They typically had separate deductibles and higher cost sharing (up to half the total cost of the care) than regular insurance. What’s more, they had to be purchased before a women became pregnant; afterward, it would be regarded as a preexisting condition.

Conservatives argue that the health law’s requirement for certain benefits has caused premiums to skyrocket. But the law’s supporters argue that may not be the case.

Sherry Glied, a former Obama administration health official and a dean at New York University, said that when you look at the main drivers of increases in health care spending, “most of the costs are in the conventional stuff,” like inpatient hospital and doctor care.

A 2016 study for the Blue Cross and Blue Shield Association backs that up. It found that cost increases in the individual market in 2014 and 2015 were driven not by inclusion of new benefits, but by the fact that people with serious illnesses, who had been previously shut out of the market, were quick to sign up and get expensive care. By contrast, maternity care, said Glied, “comes out to something under 5 percent” of the average premium.

In practice, changing the health law to do away with the requirement for maternity coverage entirely would be politically hard. Among other things, it would likely need 60 votes in the Senate, including eight Democrats. Democrats fought hard for the inclusion of maternity and other women’s health coverage in the ACA. Most analysts think Republicans can’t change the essential health benefits as part of the budget bill they are working on that requires only a simple majority for passage in the Senate.

“I don’t think they could cut it back very much,” said Timothy Jost, a professor at Washington and Lee University School of Law in Virginia and a backer of the ACA. Jost said many states adopted their own individual laws or regulations after the ACA passed to make maternity and other coverage mandatory. Many of those would have to be repealed separately as well.

Still, the Trump administration could potentially weaken the requirement, by allowing states more leeway to accept less generous plans when determining if adequate benefits are being covered.

Under the ACA, states have flexibility to choose what level of those “essential” benefits must be offered, so the required benefits more closely match what is already being offered in each state. The administration “could modify those regulations,” possibly leading to less comprehensive coverage, George said.

Ness said the administration also “could allow states to define their own essential health benefits standards. That would put states in the driver’s seat in deciding what benefits are covered and what aren’t.” That wouldn’t give states a green light to allow insurers to drop maternity coverage altogether — because it is written into the federal law — but “there could be some plans that offer maybe less generous coverage.” For example, plans could offer less prenatal coverage or require separate deductibles for maternity care.

Such a scenario would bring back the days of women who have babies and wind up covering more of their own bills.

Christie Popp, who’s due in October, said she “more than hopes” nothing happens before then.