March Madness and money: Should American universities spend so much serious cash on sports?

Most college athletic programs are a financial burden to their schools. As higher ed costs increase, why keep them? 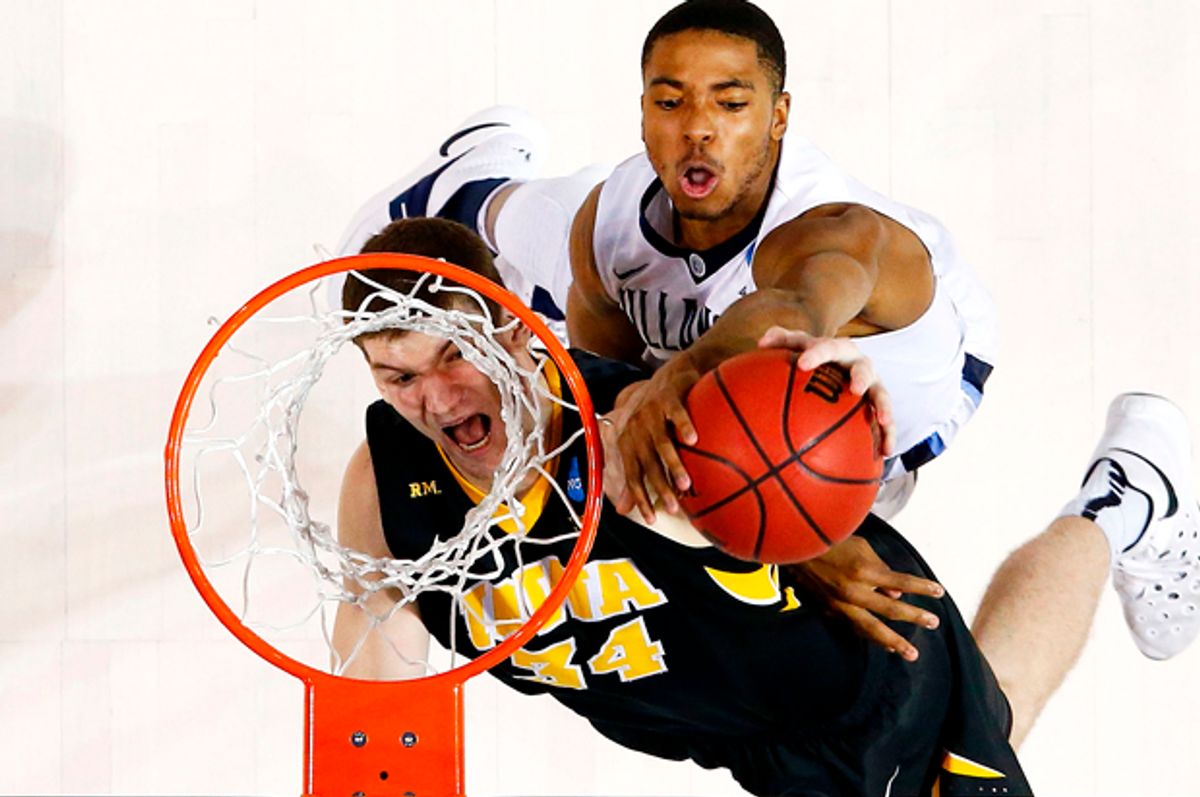 A brilliant philosophy professor at the University of St. Francis — a small, liberal arts Catholic college in the Midwest — digressed during a lecture on ethics I attended as an undergraduate to ask the rhetorical question, “What do we spend our money on here?”

The students, most of us partially responsible for the existence of the “money” in the professor’s inquiry, stared blank-eyed. For any sane young person, college budgets, for good reason, do not rank high on the priorities of concern compared with the location of the next and nearest party. The professor, with a detectable tone of disgust, answered himself: “Sports and buildings.”

America has now entered the madness of March Madness, and to alleviate the insanity, it is useful to consider the disproportionate and deleterious role that college athletics plays in higher education. It is a mystery why university sports programs even exist, as they have nothing to do with education, but before attempting to address a problem fit for Sir Arthur Conan Doyle, there is the discussion that my old philosophy professor awkwardly attempted to initiate 10 years ago.

There are no television sponsorships, lucrative merchandise deals or sold-out stadiums for tiny campuses with unrecognizable names tucked away in the corners of small towns, yet many schools continue to allocate resources to public spectacles when they could otherwise support the fine arts, scientific research and academic excellence. The funds that universities gain from subsidies and booster donations cannot be transferred to more worthy projects, like a literary magazine or a new chemistry laboratory, but student fees could support anything that universities decide is worthy. The construction of a video screen in the basketball arena instead of full-time employment for contingent instructors, or the full-ride scholarship for a wide receiver and only a half scholarship for an award-winning poet from a low-income household are, at least in part, a reflection of priorities that are stupid and destructive.

Steve Almond, in his excellent polemical memoir, "Against Football," wondered about the obvious inconsistency of higher learning with the subsidization of a sport that causes brain damage. At Notre Dame, which has one of the largest and most famous football programs in the country, a philosophy professor might ask, What do long passes, head-on collisions and fumble recoveries, as thrilling as they might be to large audiences, have to do with a liberal arts education? What does a game-winning Hail Mary have to do with Catholic theology?

Almond concluded that the answer is nothing and that many universities exist as two distinct and only nominally connected entities. Notre Dame is a school with a football team attached.

Western European universities, along with a few sensible American colleges like the University of Chicago, do not suffer from the parasitic presence of bloodsucking sports programs because they simply do not have them. Many Americans reflexively assume that Big 12 and other big-name schools profit from their athletic departments, but they have failed Economics 101. The Knight Commission on Intercollegiate Athletics determined that from 2005 to 2009, only eight athletic programs at public universities broke even or had any net operating income.

The Washington Post reported that “big-time college athletic programs are taking in more than ever,” but that many are still managing to spend more than they earn. According to the same story, 25 of the 48 departments in the five wealthiest collegiate conferences are in debt. In 2014 students in those conferences paid $114 million in required athletic fees. Tuition rises and adjunct faculty grows, while colleges spend millions of student dollars on the enhancement of backyard games that are not even financially viable.

The most popular reason apologists give to justify the massive educational and moral failure of university athletic programs is recruitment. The University of St. Francis needs sports because it can distinguish itself from other smaller-scale, largely commuter schools, attracting students who would like to continue to compete but cannot qualify for placement in larger programs. Meanwhile, the recognizable programs give important exposure to universities in an anti-intellectual culture. In 2010 the Tuscaloosa Times showed a near 8 percent increase in applications to schools with football championships in the previous year.

It appears that the apologists are correct, and that Almond might have his analysis out of order. Universities are not schools with teams attached to them, but in the minds of many Americans, athletic programs with schools attached.

“Beer and Circus,” is the bull's-eye title Murray Sperber, professor emeritus in American studies at Indiana University, gave his book on “how big-time college sports is crippling undergraduate education.” The title playfully alludes to the famous words of Juvenal, the Roman satirist, who believed that in the final days of the Empire, Romans cared only for “bread and circuses.”

The purpose and mission of a university is to educate, but many Americans, even college graduates, show little interest in the sciences or humanities, especially when compared to the beer and circus of football and basketball. Northwestern University — one of the best schools in the country — recently earned entry into the NCAA tournament for the first time in its history. The entire Chicagoland area seems high on excitement, leading one ESPN commentator to declare, in reference to dystopian depictions of Chicago from President Donald Trump and the imbecilic media, that the City of Broad Shoulders could use an injection of hope and pride. Fraser Stoddart, a Northwestern University professor who won the Nobel Prize in chemistry in October garnered little interest as a news item or potential source of emotional fortification.

The National Bureau for Economic Research found in 2012 that alumni giving, applications and academic reputation all improve after a university wins a major athletic title. Roger Sternberg, a former provost of Oklahoma State University, explained that the “town-gown” relationship is almost entirely dependent upon a successful athletic program. Residents surrounding the school show little interest in other campus events and activities.

Most universities are nonprofit organizations, but they have to navigate the market like any public or private institution. Sports maintains a dominant presence at universities, despite the obvious contradictions and odious costs, because in order to succeed in the marketplace of products and ideas, colleges must ingratiate themselves to an increasingly silly population.