Oops, he did it again: Donald Trump just can't stop himself from blurting out state secrets 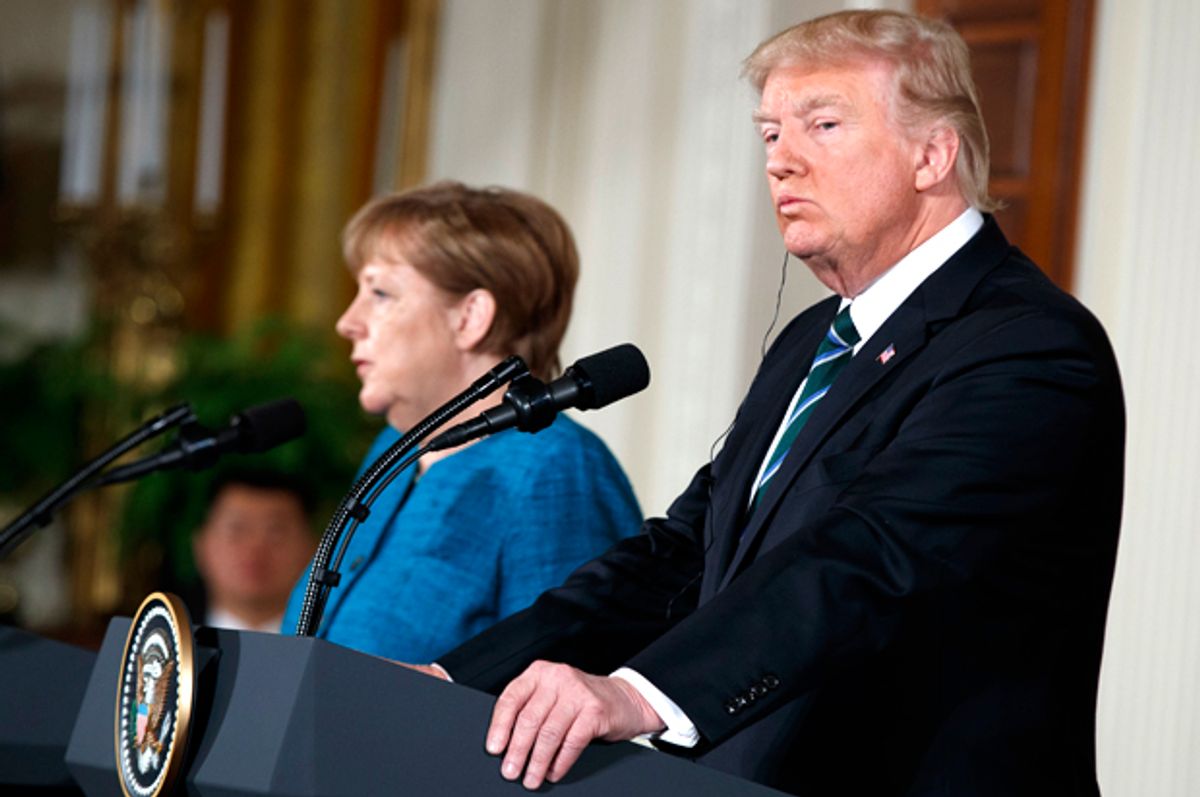 Every day he’s president, it causes damage -- damage to the traditions of the office, damage to the federal government he’s busily downsizing, damage to our reputation overseas and damage to American culture. What’s truly infuriating about Donald Trump’s presidency so far isn’t solely his remarkably unspooled blurtings or his executive orders. It’s his unforced errors. Apparently, Trump’s endless roster of gaffes include accidentally revealing national security secrets and classified information. A lot.

You might recall how, during the drumbeat of revelations about Michael Flynn, Trump’s former national security adviser, the president repeatedly said that the leaks were real, but the reporting was fake. For example: “The leaks are absolutely real. The news is fake because so much of the news is fake.” In other words, the classified information leading to the ouster of Flynn -- just 25 days into his gig in the Trump White House -- is genuine. By clearly stating “the leaks are absolutely real,” Trump confirmed the authenticity of the information that was leaked to reporters from the Washington Post and the New York Times. Who the hell knows how this connects logically to the news being "fake," but that’s Trump. He’s mentally unstable, so defying logic is what he does.

That wasn't an isolated thing. It keeps on happening.

On Thursday night, Fox News Channel aired a segment from Tucker Carlson’s interview with the president, during which Carlson wondered why Trump doesn’t ask the heads of the intelligence community whether President Obama “wire tapped” Trump Tower during the campaign. Trump’s response was startling: “I just want people to know, the CIA was hacked, and a lot of things taken — that was during the Obama years. That was not during us. That was during the Obama situation. Mike Pompeo is there now doing a fantastic job."

So in his haste to pin the WikiLeaks dump of hundreds of highly classified CIA documents on his predecessor, Trump appeared to confirm for the first time that the CIA was, in fact hacked under the previous administration. Bear in mind, obviously, that none of the reporting so far has revealed the actual source that provided the CIA documents to WikiLeaks. If past is prologue, then it was probably the Guccifer 2.0 hacker(s) backed by Russian intelligence.

To be perfectly clear: Trump may have inadvertently leaked classified information to Carlson on Fox News, and Fox News aired the leak. (Trump is planning to sue Fox’s competitor, MSNBC, for publishing two pages of his tax return from 2005.) Meanwhile, the ranking Democrat on the House Intelligence Committee, Rep. Adam Schiff, was outraged. The California congressman tweeted, “[The president] appears to have discussed something that, if true & accurate, would be classified.”

It’s worth observing that when Trump previously said “the leaks are absolutely real,” he also warned, “We’re going to find the leakers and they’re going to pay a big price.” Well, if leakers must “pay a big price,” then so should Trump if his CIA remarks were, in fact, accurate.

Then, on Friday, Trump met with German Chancellor Angela Merkel, and did it again. The public side of the summit included Trump famously refusing to shake Merkel’s hand during an Oval Office photo-op, as if he’s not satisfied with the magnitude of our national mortification. Earlier, during a joint press conference, Trump turned to Merkel and blurted, "As far as wiretapping, I guess by this past administration, at least we have something in common, perhaps."

It’s probably a good thing he included “perhaps” in there, because the rest of his statement appears to have confirmed the authenticity of a National Security Agency (NSA) document spirited away by Edward Snowden and published in the German newspaper Der Spiegel. Specifically, back in October 2013, we learned that Merkel’s cellphone had allegedly been wiretapped by U.S. intelligence. The Obama White House, however, never confirmed the veracity of that report. Obama merely pledged there wouldn’t be any wiretapping of Merkel during his administration. A pledge not to wiretap someone isn’t necessarily confirmation that it happened in the past, although it isn't quite a denial either.

Therefore, Trump seemed to have confirmed that NSA had indeed hacked Merkel’s phone. If so, his seemingly offhand comment was another significant breach of national security.

During the transition, and even prior to the election, many of us worried that Trump might blurt out national security secrets he learned during his daily briefings with intelligence officials. He’s either too addled and mentally inadequate to stop himself from doing it, or he just doesn’t care: Anything to pursue his agenda of grievances and retribution, anything to deflect from the investigation into his possible collusion with the Russian government. Trump is a existentially dangerous chief executive, and we have to seriously ask the question: Why is he still at large?