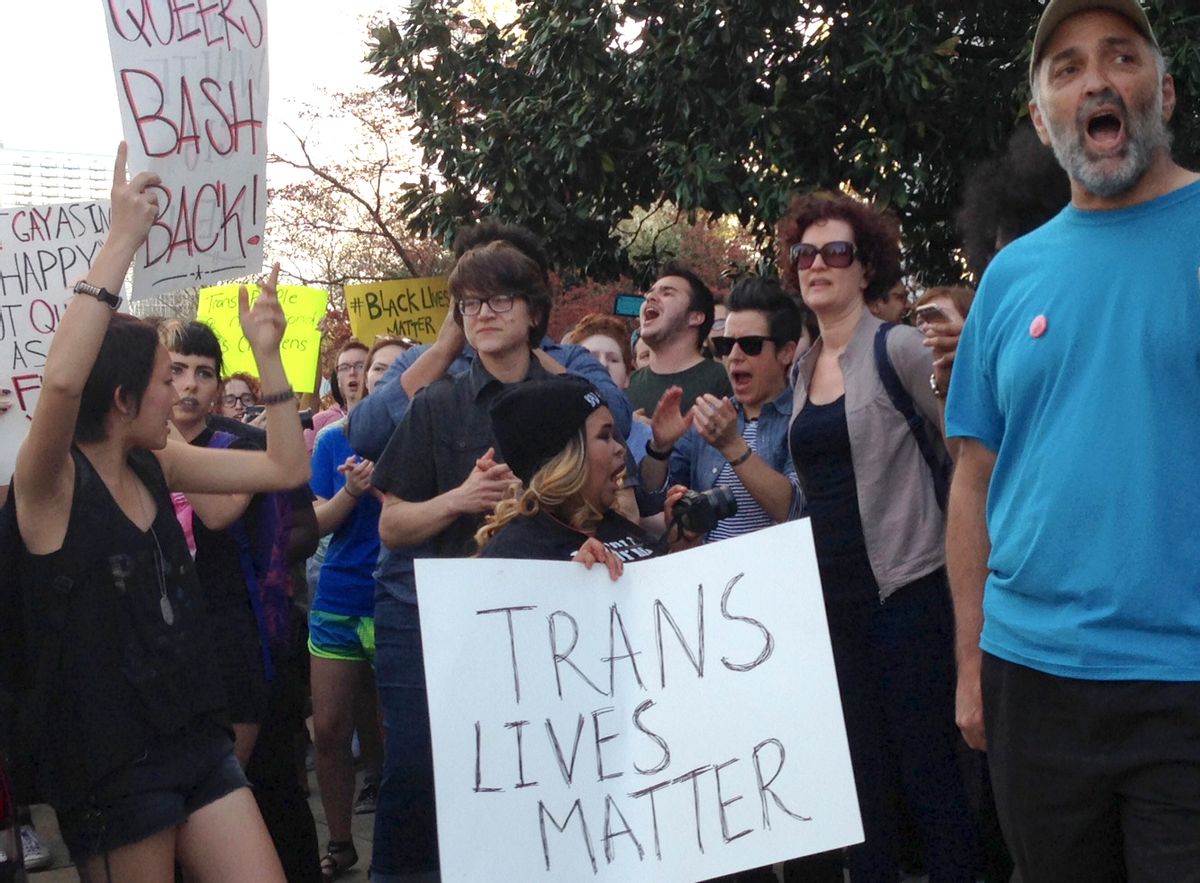 Transgender rights advocates say the time to act is now, while they still can. (AP)
--

Responding to the call “give us our roses while we’re still here,” communities across the United States on Wednesday [March 15] staged vigils, rallies and speak-outs as part of a national day of action to "celebrate the lives of black trans women and protect all trans women and femmes.”

The coordinated mobilizations, slated for at least 10 cities and towns, were a response to reports that at least seven transgender women have been killed this year alone, making 2017 on track to be the deadliest year yet for transgender women. Of the women slain, six were black and one was Lakota "two-spirit." Three were residents of Louisiana and one, Jaqarrius Holland, was just 18 years old.

The mobilizations, which came one week after the International Women’s Day Strike, are rooted in the conviction that in order to build a robust resistance to Trumpism, it is necessary to recognize and uplift the transgender women of color at the forefront of social movements. “In this time, when attacks are coming from all sides, it's easy to want to triage and hunker down until the threat passes, or even try to find the lowest common denominator,” Angela Peoples, the director of the national LGBTQ organization Get Equal, told AlterNet.

“If we don't make sure that this resistance is not just a resistance of those who have the most time, access, privilege and visibility, we will continue to see an America where trans lives are constantly under threat and black women [are] targeted and thrown under bus. black trans women and women of color are leading the resistance,” Peoples continued. “If you look at the broader Movement for Black Lives and the movement against deportations—waged long before Trump was in office—trans women’s leadership has been central to these efforts.”

This sentiment was echoed in the call-to-action released by more than 30 organizations, including Southerners on New Ground, Familia: Trans Queer Liberation Movement and the Queer Detainee Empowerment Project (QDEP). “Any resistance movement that is dynamic and powerful enough to overcome white supremacists and religious extremists who hold power in our government must also be bold enough to stand up and fight back against transphobic, racist, anti-woman, anti-femme forces in our ranks and in our neighborhoods,” the statement proclaims. “We must demand more of ourselves and of each other.”

Actions are slated to sweep major cities, as well as rural areas, following in the footsteps of the first national day of action for black transgender women in 2015, under the banner of #BlackTransLiberationTuesday. A flier for an Omaha action states, “Trans women of color are pinned between the pincers of both racism and transphobia. Black, indigenous and brown trans femmes are under attack.”

Such attacks are being waged by vigilante and institutional forces. The news outlet Mic is aiming to track the murders of transgender people through its database, Unerased, which goes back to 2010. The outlet finds that for members of the general population, one’s chance of being murdered is one in 19,000. But for young black transgender women, their chances are far higher, at one in 2,600.

The New Orleans-based LGBTQ group BreakOUT! recently responded to the spate of Louisiana killings by declaring: “While the numbers are staggering and many in our communities are still in shock, some BreakOUT! members say that they refuse to be afraid and that they won’t be silent. But we have so much other work to do in our communities—we need jobs, housing, education, and access to safe spaces—and yet we continue to have to simply fight for our lives.”

According to the National Center for Transgender Equality, “One in five transgender people in the United States has been discriminated when seeking a home, and more than one in ten have been evicted from their homes, because of their gender identity.” Meanwhile, a study conducted by the Center for American Progress and the Equal Rights Center in 2016 found that only a minority of homeless shelters are “willing to properly accommodate transgender women.”

A separate report released in 2015 by the Movement Advancement Project and Center for American Progress found that transgender people are almost four times as likely to live in deep poverty than the general population. “Transgender people of color report even higher rates of extreme poverty,” the report notes. These trends stem from institutional discrimination, the study determines, including legal discrimination, lack of family recognition and “hostile educational environments.”

Such institutional discrimination is poised to escalate under the Trump administration, which has already rolled back protections for transgender students and escalated deportations. Communities have already been fighting extreme anti-LGBTQ laws on the state level, including in North Carolina, whose lawmakers implemented the country’s most repressive bill targeting transgender people last year.

“We organized this day of action because, too often, black trans women are forced to bring issues to light on their own and are the only ones who are talking about why they need support,” says Peoples. “If we don’t put as much intention into showing up and organizing for them, the resistance will leave their experiences behind.”

This article was edited for tense by Salon, as the event described occurred last week.