The Indigenous Environmental Network vows to fight to the end 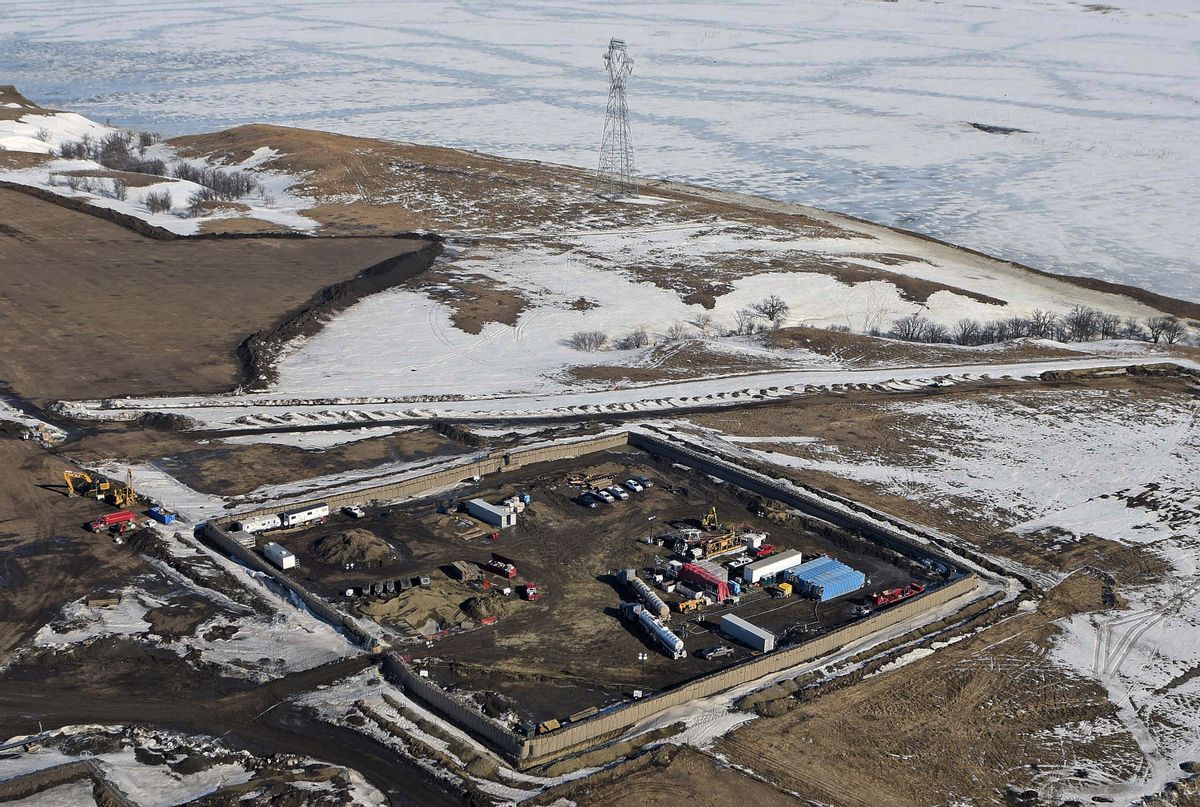 This story is part of Sarah Jaffe’s new series, Interviews for Resistance, in which she speaks with organizers, troublemakers and thinkers who are doing the hard work of fighting back against America’s corporate and political powers. Listen to the audio here.

Last week in Washington, DC, members of American Indian tribes and their supporters demonstrated against the construction of the Dakota Access pipeline. The protest was led in part by members of the Standing Rock Sioux tribe, who have been battling the US government for almost a year over the oil pipeline, which they say will contaminate their drinking water and has destroyed sacred sites in North Dakota.

In this edited interview, Jaffe speaks with Kandi Mossett of the Indigenous Environmental Network about the march last week and what’s next in the fight against the Dakota Access pipeline, as well as other pipeline projects. (The full interview is available in the audio above and online at TruthOut.org). Mossett is a member of the Mandan, Hidatsa and Arikara Nation, which has been active in the Standing Rock protests since August.

Sarah Jaffe: Last week, there was a march on Washington and an encampment. Can you tell us about that?

Kandi Mossett: The Native Nations Rise march came out of the Standing Rock camps and what was happening in North Dakota. When we started planning, we didn’t know what was going to happen at the camp — it was prior to the forced removal. But we thought something bad might happen, so we wanted to make sure that we were following up with something positive and with the next steps. Then, the camps were raided and it was a really horrible.

When we were all together in DC last week it was like a family reunion. It really lifted up everyone’s spirits because what we did at Standing Rock was much more than just a physical encampment. It has been ongoing for over 500 years. It is about sustainability and not continuing to take from the Earth without ever giving anything back.

We held a four-day event with a tepee encampment that included lobby visits, speaking, panels and performances. We had originally been expecting maybe 500 people to make it to DC for the march. When it was all said and done, there were at least 5,000 people at the march with us on Friday.

It was a great success and it will lead people to protest against all the other pipeline sites. The Dakota Access pipeline encampment, all of that was a result of the success we had with Keystone XL. We now have Keystone XL back on because of Donald Trump, but people are going back to Keystone XL to continue to fight that.

There are already other camps. There is a camp in South Dakota near the Cheyenne River Sioux Tribe. There are people also going to the Two Rivers Camp in Texas to fight against the Trans-Pecos pipeline, which is also owned by Energy Transfer Partners.

To continue to fight against the Dakota Access pipeline, a lot of people are going to Louisiana, where a camp is being set up against the Bayou Bridge pipeline. That one will connect to the Dakota Access pipeline in Illinois so that the oil can continue to go down to Port Arthur, Texas, where it will be refined and shipped to foreign markets. It is all part of the same project. A lot of people didn’t understand that until they went to DC and made the connection that we need to continue to fight.

In addition, we are arranging toxic tours and having people visit North Dakota to view the Bakken oil shale formation, so they can see where the oil is coming from and help push for more fracking bans and moratoriums.

We have the economy on our side. As we have been saying all along, the price of oil has been dropping. There is going to be a slight increase in 2017, but not what [Energy Transfer Partners] have been touting. For the last two years they have been telling oil industry folks, “Wait until 2017 when everything is going to be great again.” We know that is not true.

But we still have to continue to fight back, because there is a massive new shale oil formationthat was recently discovered in Texas. While it will take the pressure off of North Dakota, the problem is just going somewhere else. In the big picture, that doesn’t help any of us. That is why I really want to go to the Two Rivers Camp in Texas.

We are going to build the Mní Wičóni Sustained Native Community, but we did have a delay with everything that happened. Community members there are really tired of the militarized police force and different non-Bureau of Indian Affairs officers now that are on the reservation because of cross-deputization and jurisdiction. The project is still fully funded and we’re continuing to have educational forums about it. It is what we had always talked about, leaving something behind for the Standing Rock community, their children and future generations.

SJ: I want to go back to the forced removal from Standing Rock. A lot of people were closely paying attention around the election and then the election took everybody’s attention away, so people don’t really know the story of the removal. Could you give us a little bit more background?

KM: What happened was the state waged a really good campaign — for themselves, it wasn’t good for us — to cause division between the Standing Rock Sioux Tribe and the people at the camps. They did that by blocking the bridge on Highway 1806, which caused casino revenue to drop significantly because a lot of people would go from Bismarck down to the Prairie Knights Casino. It also forced ambulances to go around to get up the hospital because they couldn’t take Highway 1806 to Bismarck.

Because of the fight at Standing Rock a lot of the hidden racism that was always there in North Dakota — I grew up there, I always experienced it — became more blatant because of the actions that were being done in Bismarck to say, “Look, this is affecting you, too. Of all the people, you in Bismarck should care the most because you didn’t want this either.” But it pulled out the racism. School children were getting harassed and they actually had to have escorts follow them to their basketball games because whether or not the children said anything about the pipeline fight, they would get harassed by the other kids and their parents.

But what the press really glommed onto was “These water protectors are polluting and destroying the river by being there.” They took all of the attention away from the fact that there is an oil pipeline with carcinogenic materials running through it and said we were polluting the river. That caused further division that made it really hard for us because it was like, “How can the media twist or spin this anymore than they already were before?”

We were cleaning up for two or three weeks and then, when we were forcibly removed, we had to stop because they were like, “Get out of here.” Then, they said, “We had to clean this. It is all their fault.” It is like, “You forced us out at gunpoint.” All of that led up to the police, fully geared up with rifles, machine guns and tanks, that came out against unarmed water protectors. They had made it sound like they were going to find weapons or something. But the Sheriff of Morton County, Kyle Kirchmeier, put out a report that said, “We did not find any weapons in the camp.” We thought, “Of course you didn’t! We have been saying this all along.” On my on Facebook page I was teasing them saying, “Did they find my stash of snowballs?” because that was one of the things they complained about, that people threw snowballs at them with their machine guns pointed at us.

The whole point is that all of this still exists in this country. It really woke up the country. In fact, it woke up the world to see that the US isn’t just one almighty entity against the rest of the world but that we are broken down into factions within our own country. It is founded on a legacy of taking, pillaging of native lands for the gain of capitalism and colonization. Other countries were on board with us and were standing with Standing Rock.

How do we continue that fight on? It is to say: No more fossil fuel industry anywhere in the world. Do not allow the US to be the bully it has been. It is really ridiculous that all of these other countries are on board with changing their energy systems and their transportation systems and yet, the US keeps holding on to oil, gas, coal and uranium. It negatively affects other countries because of that need or that greed for the fossil fuel industry.

SJ: How can people keep up with these different camps and with the movement and be supportive?

KM: Even if people can’t go to a camp they can support the defund campaign and the divestment campaign. We have DefundDAPL.org, which shows you the 17 banks that are directly funding these projects. No matter who people bank with, we are asking them to take their money out of big banks and put them into their local credit unions to bring power back to their communities and away from corporate interests.

Standing Rock showed people, “Oh, we do actually have a lot of power. We didn’t realize it.” We are encouraging people to fight against the Trump administration’s push for fossil fuel resources. We want people to do that by having community gardens and local community education events on how to live more sustainably. If that means not having strawberries in December, depending on where you live, then so be it. Food sovereignty and transportation systems are all tied into it.

Another layer in addition to doing grass-roots work is to get involved in politics. I know that is hard for some people because they hate it. I used to hate politics myself because I felt like politicians didn’t represent me. They won’t represent you unless you make your voice heard in your town, community and state.

In North Dakota we are battling against all of these ridiculous laws — for example, they are trying to ban wind projects for two years so they can bring back coal projects. I have to talk to my family and say, “Here is a letter for you. Just sign it.” You have to do whatever it takes to get people involved and aware of the issues in your own communities. We have to make a political impact. If that is not good enough, then people should run for office if they want to make change.

Interviews for Resistance is a project of Sarah Jaffe, with assistance from Laura Feuillebois and support from the Nation Institute. It is also available as a podcast.