High-tech toys and tools offer scads of information. It's hard to imagine we survived so long without them 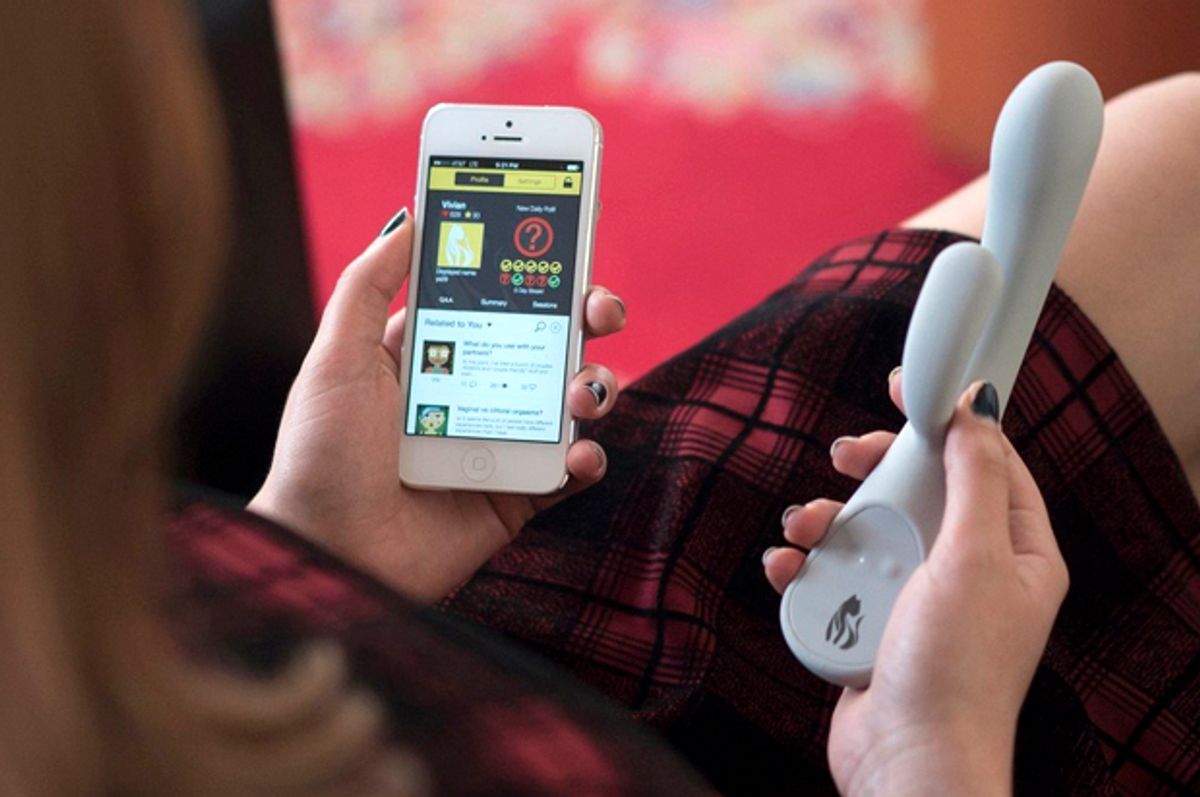 Ladies, if you’re looking for an orgasm, you might think about investing in a vibrator. But if you’re looking to learn about your orgasm, you’ll need to invest in something different, something “smart.” Fortunately, there’s a school of entrepreneurs who have managed to merge the two. Smart vibrators are out there, and they’re available in sex shops near you. The Lioness is just one example. Though it looks like your standard sex toy, the Lioness is loaded with advanced sensors to help measure your orgasm through vaginal contractions, temperature and movement. All that information can be accessed through an app that users are encouraged to download on their smartphones. In that way, women can better understand how long it takes them to achieve orgasm and what kind of stimulation they like best, and it even offers suggestions about what you can try next.

Yeah, predicting your period can be hard. And most women have had to make a mad dash to the pharmacy at least once in their lives. Fortunately, we’re looking at a future where that will no longer be part of the period routine. Because period tracking has now become a techy endeavor. The folks behind the LoonCup advertise their product as “the world’s first smart menstrual cup.” The device can best be described as a sustainable feminine hygiene product that can be worn inside the vagina to collect menstrual fluid. It relies on built-in sensors to collect information regarding fluid volume, color and other important tidbits about your cycle. All information will be delivered directly to your smartphone. Learn more, leak less.

3. Period sex without the mess

Unless your partner has a penchant for period blood (and believe me, some do), you might feel inclined to hold off on sex until after your cycle comes to an end. But who wants to let a pesky little thing like your period get in the way of a romping good time. That’s at least what the folks behind Flex were thinking. The device is designed to sit at the base of the cervix to collect menstrual fluid. Meanwhile, the vaginal canal is left open for entry. It’s the perfect product for frisky menstruating women with picky partners.

Most of the time, tampons and periods come as a package. But not always. Sometimes, they come paired with cannabis. Foria vaginal suppositories were designed to help stimulate pelvic relaxation, facilitate deep penetration and create a heightened sense of arousal for women who like weed. And you don’t have to have a vagina to keep high down below. The company has also released a line of rectal suppositories, so you can get it in and get it on, no matter what kind of genitalia you posses.

Most of us have heard of steam baths. Most of us have not heard of a vaginal steam bath. But they’re out there. Apparently, they’ve been performed in Korea for hundreds of years. The idea is to balance female hormone levels and maintain “internal health.” But before you go sign up for the service, you might want to have a chat with your gynecologist. Most encourage women to avoid the practice, citing concerns over disrupting the natural bacteria every vagina possesses. Also, it burns.

6. Fitbits for your naughty bits

If you’re not exercising your pelvic floor muscles, you should start. According to health experts, maintaining a strong pelvic floor can help give you better control over your orgasms. Women who have given birth are also encouraged to exercise this area to prevent incontinence. But it’s hard to measure progress on things we can see. Fortunately, there’s Elvie, a Fitbit for your vagina. The device connects to an app via Bluetooth to deliver instant feedback regarding your strength. Because remember, a strong vagina is a happy vagina.

Nothing is more embarrassing than a sweat stain, and nothing is more mortifying than when that sweat stain shows up somewhere around your crotch. That’s why Knix developed a pair of panties that come with a built-in, leak-proof, highly absorbent and anti-microbial panty liner, “for when you need it most.” Those who also suffer from sweaty underboob might be happy to know that the company has developed a bra using the same material.

Do you miss your hymen? Do you crave seeing a flash of red before, during or after sex? If so, you’re in luck. The artificial hymen is a cost-effective way to replicate a part of you that was lost long ago. The product is designed to “fake virginity” by creating a fake membrane intended to mimic a real human hymen. While there are areas of the world where maintaining your virginity can literally become a matter of life and death, most customers aren’t living under such dark circumstances. In fact, many are members of the kink community. But it’s possible that this product over-delivers on its promise. After testing it out with her boyfriend, one blogger said her crotch looked something like the inside of a lava lamp by the time they were done. Buyer beware.