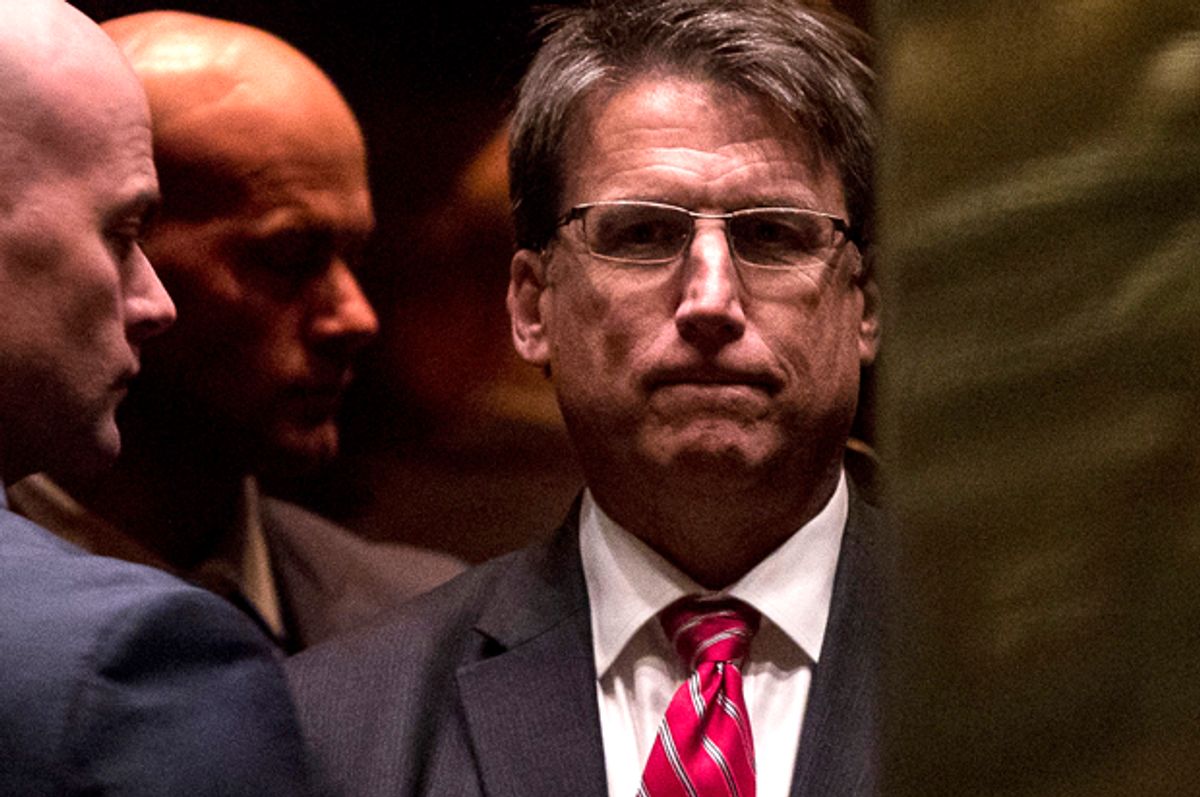 North Carolina’s infamous House Bill 2 didn’t just cost Pat McCrory his job. The ousted Republican governor told a Christian podcast that since losing the his bid for reelection, he hasn’t been able to find a new one. McCrory, who lobbied for a recount after coming up short in a close race with former N.C. Attorney General Roy Cooper, told the evangelical website WORLD that potential employers have stonewalled him because of his anti-LGBT views. “People are reluctant to hire me, because, ‘oh my gosh, he’s a bigot’ — which is the last thing I am,” McCrory said.

The former governor, who was promised a position in the Trump administration that never materialized, claimed in a previous interview with WORLD that his treatment is the result of liberal groupthink. “If you disagree with the politically correct thought police on this new definition of gender. . . you’re the worst of evil,” McCrory said. “It’s almost as if I broke a law.”

The reason that no one wants to hire McCrory, though, has nothing to do with the tyranny of left-wing ideologues. Businesses who have spent the past few decades making a name for themselves as leaders in corporate equality are unlikely to jeopardize their reputation by hiring someone whose public record is opposed to fostering an atmosphere of diversity and inclusion. If the economic fallout over HB 2 was proof positive that anti-LGBT discrimination is bad for business, McCrory is finding out the hard way that bigotry is also bad for your career.

When the Human Rights Campaign’s Corporate Equality Index first launched in 2002, the landscape for LGBT rights was completely different. Massachusetts wouldn’t legalize marriage equality for another two years, the first state to do so, and states like Nevada, Alaska, and Nebraska had passed constitutional bans on allowing same-sex couples to wed. At the time, Gallup statistics showed that just 38 percent of Americans supported equal marriage. The Index reflected that reality: Of the Fortune 500 companies surveyed by HRC, just 13 boasted perfect scores when it came to LGBT inclusion. Top honors went to Apple, Nike, and Aetna.

Fifteen years later, the business world is radically different. the number of Fortune 500 companies that earned a 100 on their scale was 15 times larger. Eighty-two percent of those businesses enumerated gender identity protections in their workplace guidelines, and half offer trans-inclusive healthcare.

What changed? In addition to a public that’s increasingly favorable toward LGBT rights, corporations realized that being inclusive helps the bottom line.

“What businesses have found — well ahead of lawmakers and the courts — is that being an LGBT-inclusive employer is crucial when it comes to attracting and retaining talent and when it comes to appealing to the ever-growing lucrative LGBT consumer market,” said Deena Fidas, Director of the Workplace Equality Program at HRC. “It’s just part of doing business.”

Galileo Capital Management Ltd, an investment group based in the U.K., estimated last that the global buying power of the LGBT community totaled $1.7 trillion — up from $884 billion two years prior. And a 2016 report from The Center for Talent Innovation, an international corporate research team, found that queer and transgender people tend to support companies that support them. Seventy-one percent of LGBT respondents reported that they were more likely to purchase a good or service from companies with a positive record on equality. Eighty-two percent of those who identified as LGBT allies said the same.

The opposite is also true: LGBT people are less likely to give their business to companies viewed as opposed to their rights.

In 2013, advocacy groups like HRC and GLAAD called for a boycott of Barilla after its CEO, Guido Barilla, claimed that the popular pasta brand would not be featuring same-sex families in its advertisements, as the company supports a “classic family where the woman has a fundamental role.” The backlash was effective enough that Fidas said executives “totally [transformed] the company with regards to their policies, their benefits, and their internal practices on LGBT inclusion.” By 2014, Barilla became one of those perfect-scoring companies atop the Corporate Equality Index.

Even Chik-fil-A, the chicken chain whose CEO remains opposed to equality, drastically decreased the amount its foundation gives to anti-gay lobbying groups following outcry from LGBT customers in 2012. The Marriage & Family Foundation and the National Christian Foundation received $3.6 million in 2011, but not a single red cent the following year.

These boycotts have raised concerns of “free speech” among conservatives who feel that their right to express their political views without reprisal is being violated. But in truth, checks on anti-LGBT rhetoric come just as much from inside the company as they do from outside boycott efforts. When Brendan Eich, the Mozilla CEO who donated $1,000 to Proposition 8, stepped down in 2013, it was not the outrage machine that did him in; it was his own employees. Many executives and board members threatened to resign if Eich, who also gave money to Pat Buchanan’s failed presidential campaign, remained at the helm.

Having employees — especially at the leadership level — who are vocally opposed to LGBT rights is increasingly seen as a liability to corporations that want to do business in the 21st century. That’s why companies like Walmart, Papa John’s, and Ford Motor Company have fired anti-gay employees following virulently homophobic outbursts. Susan Olsen, better known as Cindy from “The Brady Bunch,” was sacked from her radio show after harassing an openly gay actor she previously interviewed on the program, calling him a “f****t.”

But if the pressure to stop employing anti-gay workers is coming from the inside, the reason is that a company’s hiring sets a tone for the workplace it wants to build, according to Rachel Rubin of Out & Equal Workplace Advocates.

“If you’re an LGBT emerging executive and you look up at your company and see a vocally homophobic CEO and no LGBT senior leadership, it’s hard to imagine yourself moving up at that company,” said Rubin, who serves as the Deputy Director for the national LGBT organization. “It becomes difficult to retain top talent, and one of the most expensive costs to companies is recruitment and retention. If you’re losing that, it’s hard to remain competitive as a business at all.”

If you’re applying for a job and you see Pat McCrory’s name on the leadership board, it isn’t just a sign that you may not advance at the company. You might be concerned about getting fired for being out in the workplace, if you get hired at all.

Although more companies than ever before have embraced non-discrimination policies protecting the rights of the LGBT workers, you can still be fired in 28 states for your gender identity or sexual orientation. The Harvard Business Review estimated one in 10 LGBT employees have left a job because the environment was unwelcoming. Because there are currently no federal laws to prevent employees from being terminated just because of who they are, the kinds of people a company hires communicates a great deal about its values.

A 2014 study from HRC found that despite recent advances in corporate equality, a majority of LGBT employees (53 percent) remain closeted at work, fearing reprisal. Instead of worrying about whether they can be out to their coworkers, Selisse Berry of Out & Equal said that getting a job at a company whose leaders are dedicated to equality means LGBT workers can bring their whole selves to the workplace.

“The energy they put into hiding could be energy that they put into being successful and helping the bottom line of the company,” said Berry, who serves as the organization’s CEO.

States across the U.S. are finding out the hard way that discriminating against LGBT people has very real costs. After passing HB 2 nearly a year ago, North Carolina has lost up to $201 million in tourism and tax revenue, according to the Raleigh News & Observer. Similar legislation currently being debated in Texas, which would force transgender people to use public bathrooms that do not correspond with their gender identity, could result in an $8.5 billion hit for the Lone Star State. The Texas Association of Business estimated that the state would lose  185,000 jobs, as well as Texas’ ability to “attract, recruit, and retain top talent.”

But if Mr. McCrory can’t find a job, he should be comforted in the fact that he’s not alone. Should more states and private employers follow his lead, he’ll be on the unemployment line with hundreds of LGBT employees and other workers harmed by those policies. Hate might not look great on his CV, but it’s better than being targeted by bigots.