Homosexuality, God and ISIS: The secret life of a lonely gay Christian in Yemen

As Al-Qaeda and ISIS encroach on his once-progressive city, a terrified young man has become the ultimate “infidel" 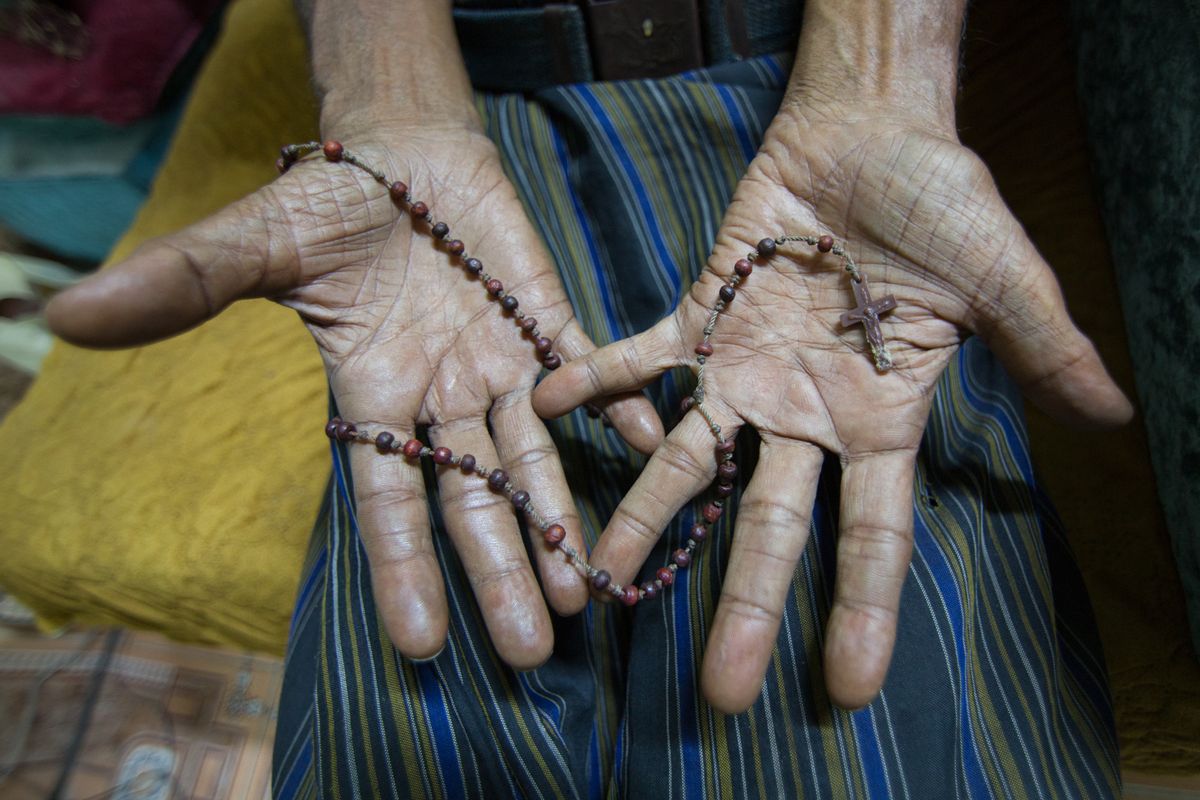 A member of the last remaining originally Christian family in Aden holds a rosary in his hands. Their priest was Father Tom, who was kidnapped last year and is still being held by ISIS. (Maria De La Guardia/Narratively)
--

The day after cautiously navigating the remains of churches and Christian graveyards burnt and defaced with graffiti and pockmarked by the bombs and bullets of Al Qaeda and ISIS, Ahmed Nader — a pseudonym used for his protection — sits across from me. He is visibly nervous throughout our interview, even though we are in a secret location that took weeks for him to agree upon. Nader, in his mid-thirties, constantly asks for reassurance that no one can overhear our conversation. Sweat creates dark patches on his t-shirt. His shuffling feet move dust and dirt around the floor as only the afternoon sun illuminates the space.

A resident of Aden, a regional capital in southern Yemen, Nader converted to Christianity from Islam more than two decades ago. He is also gay.

Read more Narratively: "The Day Our Daughter Got Hit"

“In Yemeni society I wish people would see me not as ‘just gay’ or ‘just Christian,’” he says between numerous glances out an open window. “I am a human being, a person. I wish they would see me as that.”

Yemen law is based in part on the principles of Sharia, declaring homosexuality illegal and punishable by death. Yemenis like Nader are trapped, and receive little attention from international media or governments. As war broke out here, all of the country’s foreign embassies shuttered their doors years ago, so he has nowhere to go for help.

Nader and other locals disclosed that fourteen gay men were murdered in Aden this past year alone. He also claims that most of them were killed by Al Qaeda members, who, before joining the terrorist organization, were romantically linked to their eventual victims. After relationships end, he says, the men pledge their allegiance to Al Qaeda as a front or for redemption.

Read more Narratively: "Us: ‘We’re Getting Married!’ Them: ‘How Can You Be So Selfish?!’"

When the Republic of Yemen was formed in 1990 — when the southern half of the country united with the north — the few Christians who remained after the British and Socialist periods were threatened. Then, most fled the country as the fundamentalist Salafi movement — an ultra-conservative branch within Sunni Islam that prioritizes religious matters over worldly affairs — gained power. In 1994 a civil war raged between the pro-union North and the secession-minded, Marxist-separatist South. In the years since, the South has continually fought for autonomy and self-determination.

Then, two years ago, the Houthi militia from the North violently took control of Aden with tanks appearing in the streets overnight. Though the Houthi were eventually driven out by the Southern Resistance and pro-government fighters, since then, according to Marie-Christine Heinze, President of the Center for Applied Research in Partnership with the Orient (CARPO), “Aden has been grappling with enormous security problems.” She says, “a large number of Salafi militias have taken control over parts of the city,” and adds that Al Qaeda has a strong presence in the South, while the Islamic State is also trying to establish a foothold.

Nader’s parents were Muslim, but they were among the many liberal Aden residents who recognized Christian holidays, drank alcohol and did not require women to cover their hair. Then, beginning with the war in 1994, the Saleh regime labeled people in the South with such ideologies as “infidels.” Radical Islam swiftly replaced religious tolerance, and anti-minority, anti-Christian and anti-foreign sentiment set in.

Pressured, and sometimes even beaten by relatives to attend Islamic religious services as a preteen, Nader became lost. He questioned the religion being chosen for him. “I believed that God is everywhere,” he says. “You did not need to go to the mosque to pray.”

Nader says he was always drawn to Christianity. Growing up, when Christianity was not only accepted but also widely practiced here, he would draw pictures of Mary and Jesus to hang on his wall. There was something about the imagery that fascinated him. As he pieced together his family’s past and tried to find his place in the present day, Nader learned he had Christian ancestors who immigrated from India in the 1700s, and chose Islam decades after their arrival.

He decided he would convert from Islam to Christianity. Although never baptized, Nader prayed alone, dedicating himself to Christianity before he was even a teenager. This was well known by family and peers around him, though it was never accepted, especially not by his Salafi high school religious education teacher, who taught students that the Koran instructed them to hate Christians and Jews.

The extremist ideas taught in the halaqas — Islamic study circles for young boys held at the mosque — led much of the country’s young population to radical, intolerant views. Many of Nader’s classmates went on to become Al Qaeda members.

At thirteen, Nader spoke up when an instructor declared the Christian cross to be pointless. Nader explained the power of the holy symbol to his teacher and peers as he saw it: “Just like the Koran is the word of God translated into a book, Jesus is God’s word translated into a man, who died on that cross for those who believed.” All those around him looked his way with hate in their eyes. It was the beginning of a lifetime of judgment and the struggle to come.

Nader’s mother and father both died when he was in his late twenties. He was not allowed inside the mosque to pray for either of them or attend their funeral ceremonies. The final days of his mother’s life offered the only closure Nader would have, as he sat next to her bed in the hospital ward. It was last time he would ever get that close to her body. Today, he doesn’t even know where she is buried. Christians are not allowed into Muslim cemeteries.

Meanwhile, Al Qaeda has destroyed the crosses on the gravestones of nuns; defaced the plots of deceased Christians; and bombed and set fire to the last two churches used by worshipers in Aden, defacing walls with bullet holes and ISIS flags. At one church, graffiti that reads “Fuck Jesus” now greets all who enter the holy place.

In the midst of the assaults and torment, Nader’s life began rapidly crashing around him. His uncle tried to take the family house, his employer fired him, and there were problems in his relationship with his boyfriend. He says one afternoon he attempted suicide by overdosing on painkillers.

Nader did not come out as gay or have relations with men until his late twenties. On his left hand he wears a wedding ring, a band he holds and twists when he is anxious. Like his unconventional sexuality he opts to wear it on his thumb.

In Arab culture a serious relationship quickly turns to marriage; this has already happened four times in Nader’s life. There was no ceremony or official legal union, but there was an exchange of rings between the partners that signified just as much to the men. The longest and most serious arrangement began with a Saudi man Nader was with for three years. “Marriage was a union of love, communication and understanding,” he says. “The element of sex was the last priority for me, and has remained this way in the years to follow.”

Nader’s current partner is Muslim who accepts Nader’s religion. This was not always the case in his past relationships though. His first two boyfriends opposed and questioned his faith. An ex-boyfriend who wavers between his alliance with Al Qaeda and homosexuality still phones Nader, wanting sex. This offer is rejected immediately. The risk is too high.

While his peers attended the halaqas, Nader took to painting and pursued a bachelor’s degree in Fine Arts. “I used drawing to express myself and explore my thoughts and religious ideas,” he says, “but I was always met with critique[s], even called an infidel.” Always interested in creativity and counterculture, using hand gestures, he describes the size of a Mohawk he used to wear and points to where a piercing once punctuated his chin. This was a rare, short-lived period when he allowed himself to be true to who he was, despite the inevitable repercussions.

Nader takes solace in his religious beliefs. He says, “Jesus created me as I am, so it works fine. Jesus never said to kill gays, hurt them, or exile them. Jesus commands us to love. Jesus sacrificed his life for all of us, no matter the traits we have. He sat with drunks, adulterers, murders, everyone. He lived amongst the people and did not discriminate. While in Islam, even at the time of the Prophet, this was not the case.”

After several attacks and attempts on his life, Nader no longer lets on publicly that he is a Christian, nor shares his sexuality. He points to marks on his left cheek, the result of one attack that damaged the inside of his mouth and nearly took his life. The assault still haunts him, though his composure never wavers. He pauses, and retells experiences with eyes turning glossy and red. “If you questioned my faith, I wouldn’t back down. This brought consequences though.”

In 2013, Al Qaeda members entered Nader’s workplace and ordered customers to leave. The men beat and stabbed Nader with a twelve-inch knife. Spikes worn on his attackers’ knuckles were driven into his legs, arms and back. “I will be murdered on this day,” Nader told himself. On the floor, in what he thought were his last moments, Nader put into practice what he had seen on the “Dr. Phil” and “Oprah” shows: play dead if your attackers do not stop when you fight back. It was enough to convince the Al Qaeda fighters they had succeeded, to which they shouted, “Allah Akbar, the infidel is dead!” and left. Witnesses spoke of two armed men on the street, waiting for his body to be dragged outside and shot.

Since the series of attacks, Nader has removed the Bible from his phone. His small rosary has also had to go. Worship is done internally and in secret. “I pray in times of hardship,” he says.

The persecution, threats and assaults have left Nader wanting to leave Yemen. “I want a place that gives me freedom, to worship my religion, to be gay without consequence, to practice art,” he says.

The most difficult thing now is being forced to partake in Islamic practices by family members and neighbors at his local mosque. When the call to prayer sounds in public, sometimes people who know he is Christian will menacingly tell him to “Pray for the Prophet.” He is scared he will be killed if he doesn’t. “I feel persecuted and weak. God knows that if someone is forced to say something it is not betrayal. This doesn’t stop me from hurting though.”

Nader maintains his deep Christian convictions, if only in private. He talks frequently about love and peace, turning the other cheek, and only those without sin being able to cast the first stone. In essence, “God is the one who judges, not men. God has already died for these people, he has forgiven them, so how can I not also forgive them?”