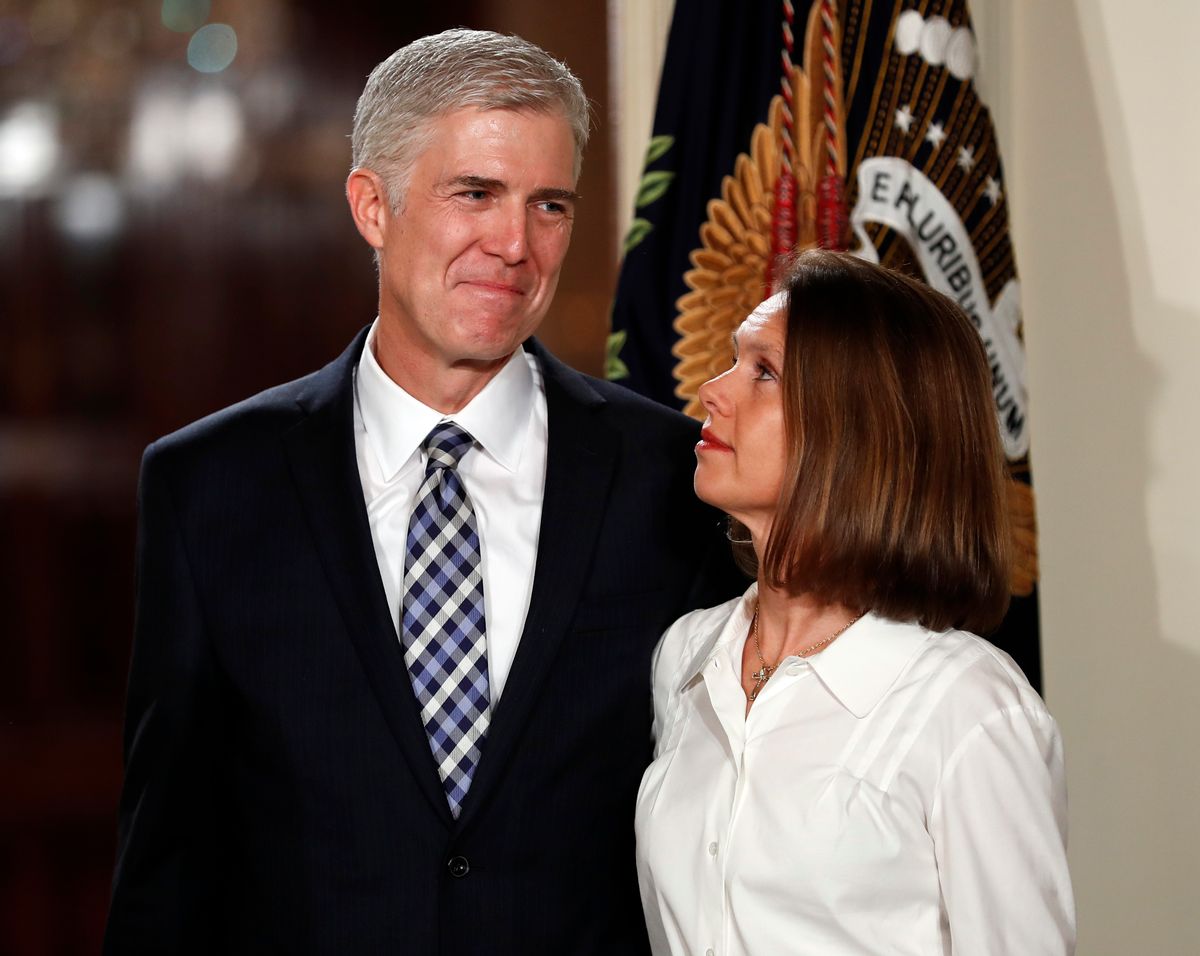 FILE - In this Jan. 31, 2017, file photo, Judge Neil Gorsuch stands with his wife Louise as President Donald Trump announces him as his choice for the Supreme Court in the East Room on the White House in Washington. Gorsuch is roundly described by colleagues and friends as a silver-haired combination of wicked smarts, down-to-earth modesty, disarming warmth and careful deliberation. His critics largely agree with that view of the self-described “workaday judge” in polyester robes. Even so, they’re not sure it’s enough to warrant giving him a spot on the court. (AP Photo/Carolyn Kaster, File) (AP)
--

As late as 2016, President Donald Trump’s pick to serve a lifetime appointment on the United States Supreme Court advocated that law firms should engage in illegal and sexist hiring practices.

According to a former student of Supreme Court nominee Neil Gorsuch, the federal judge on the 10th Circuit Court of Appeals warned his class that employers, specifically law firms, should be leery of hiring female applicants without inquiring about their plans for having children.

Jennifer Sisk, a Denver attorney who took a class taught by Gorsuch at University of Colorado law school, wrote to Senate Judiciary Chairman Chuck Grassley, R-Iowa, and Ranking Member Dianne Feinstein, D-Calif., claiming that Gorsuch said firms should determine during the interview process if women are seeking to “manipulate” a company's maternity benefits. The two-page letter was posted on Sunday evening by the National Employment Lawyers Association and the National Women's Law Center. The NELA also published additional documents they said support Sisk's claim, including a Facebook post from the day after the alleged incident, an email exchange between Sisk and school staff and an affidavit from an anonymous former student of Gorsuch who alleged that about 40 to 50 students witnessed Gorsuch’s “strongly gendered” remarks in the classroom.

Sisk said Gorsuch, a visiting professor at the Boulder campus, posed a hypothetical scenario in a Legal Ethics and Professionalism class on April 19, 2016. Gorsuch asked the students if a female job candidate with student debt should disclose to a potential employer that she wants to start a family.

Gorsuch at one point asked the class whether they knew of any women who had "used a company to get maternity benefits and then left right after having a baby," according to Sisk's letter.

"C'mon guys," an exasperated Gorsuch said after only a handful of students raised their hands, Sisk wrote. According to the former student, Gorsuch told his class that "many" women used their employers for maternity benefits and then left after giving birth.

“All of your hands should be up,” Gorsuch encouraged the students. The judge “argued that because many women left their companies we all knew women who purposefully used their companies.”

According to Sisk, Gorsuch went on to argue that "companies must ask females about their family and pregnancy plans to protect the company." She recalled that "Judge Gorsuch continued to steer the conversation back to the problems women pose for companies and the protections that companies need from women."

It is, of course, illegal for companies to make hiring decisions on the basis of pregnancy or gender. Furthermore, guidelines from the Equal Employment Opportunity Commission discourage employers from even asking applicants about gender-related characteristics such as pregnancy.

Sisk told NPR that she sent the letter because Gorsuch's "values shared during that class were concerning and should be explored further during his confirmation hearings for the United States Supreme Court" — which kicked off Monday.

“It concerns me that a man who is being considered for our highest court holds views that discounts the worth of working females,” she wrote to the committee.

Gorsuch was appointed by Trump to fill the seat left by the late Justice Antonin Scalia. Republicans are in lockstep with Gorsuch, believing he will restore the Supreme Court’s conservative tilt.

A Trump administration official countered Sisk’s letter by highlighting that Gorsuch had positive reviews among other students at Boulder. One male student of Gorsuch’s defended the nominee’s actions in a letter to the Senate Judiciary Committee on Sunday.

"Although Judge Gorsuch did discuss some of the topics mentioned in the letter, he did not do so in the manner described," Will Hauptman wrote in defense of Trump’s nominee. "The judge was very matter-of-fact in that we would face difficult decisions; he himself recalled working late nights when he had a young child with whom he wished to share more time. The seriousness with which the judge asked us to consider these realities reflected his desire to make us aware of them, not any animus against a career or group."

Even Sisk recently wrote on Facebook that she supports her former professor for a seat on the highest court in the land, despite his apparent dismissal of discriminatory hiring practices, because "he's still better than the rest of the choices."

Democrats in the Senate still appear divided on how to take on a well-regarded jurist ahead of his confirmations. Accounts like Sisk’s, however, are sure to galvanize the Democratic base against the confirmation of a judge that could potentially push back efforts for gender equality in the workplace decades.