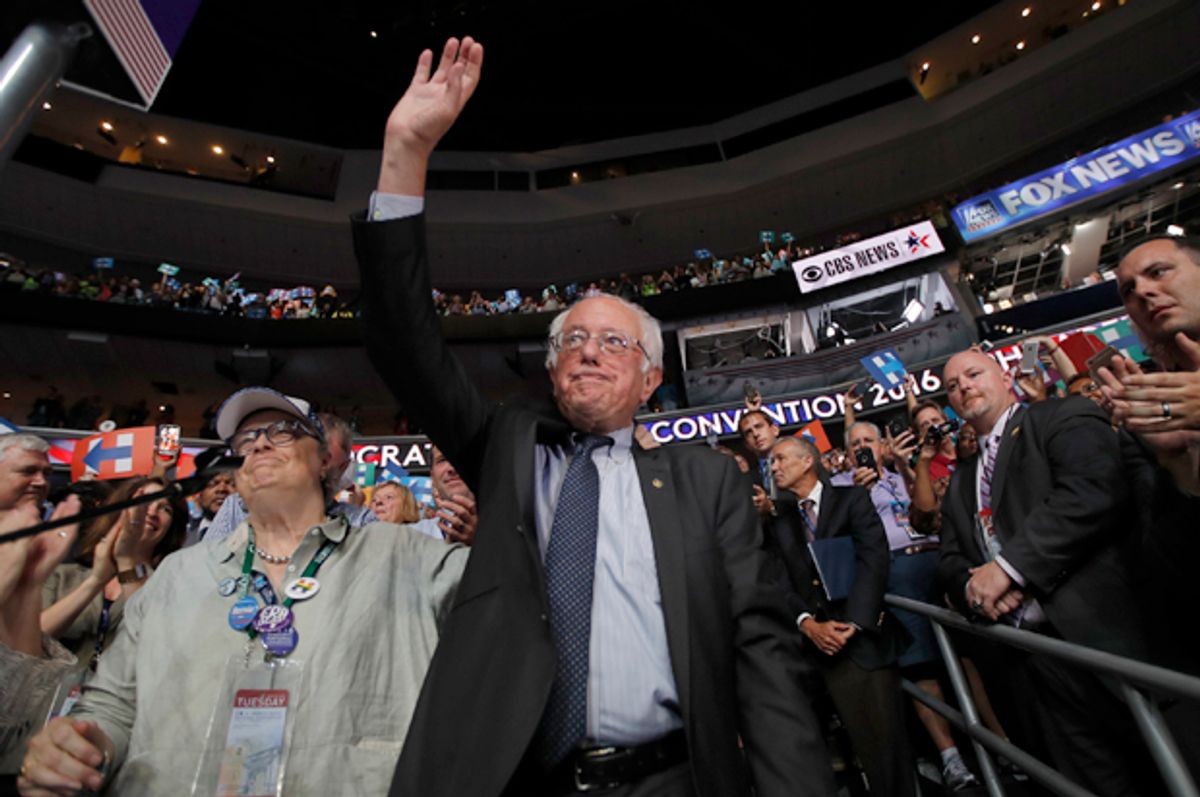 Bernie Sanders has the highest approval rating of any politician in the country with 61 percent approving, while only 32 percent disapproving, according to a March 15 Fox News poll. The Sanders 29 plus percent favorable/unfavorable gap is far superior to Trump's negative 8 percent.

What accounts for Sanders popularity and how can progressives build on it?

Bernie Sanders has been saying the same things for nearly a half-century. He's been a consistent democratic-socialist fighting in behalf of working people and against financial/corporate power. While his straightforward commitment to his ideals is refreshingly genuine, he did not make his mark on the national scene until last year at age 74.

Sanders didn't change but the world did.

His message about the ravages and unfairness of runaway inequality hit home because it is true. He and his campaign became the next phase of the revolt against the one percent initiated by the remarkable, yet short-lived, Occupy Wall Street.

Sanders took this discontent many steps forward by clearly articulating a social-democratic agenda for working people. He turned "We are the 99%" into a clear policy agenda. That agenda, not just his enormous integrity, is why he remains so popular.

He stands for something and so should we.

Here's a rough draft of such an agenda:

But can America really afford these basic human rights?

We are the richest nation in world history. The resources are here, but our prosperity has been hijacked by financial and corporate elites. In 1970 the CEO pay/worker pay ratio was $45 to one. Today it is more than $840 to one.

Our economy is being financially strip-mined by Wall Street and their corporate partners. (Financial strip-mining refers to the full set of financial maneuvers that extract money from non-financial corporations and moves wealth to large investors, hedge funds, private equity companies, investment banks and insurance companies. Just as mineral strip-mining harms the natural environment, the financial kind damages the corporate environment and can leave behind hollowed-out facilities.

This social-democratic agenda is possible if, and only if, financial strip-mining is halted. Billions of dollars of ill-gotten gains must be transferred from Wall Street to Main Street. Here are basic policies that can achieve that goal:

(Even Donald Trump once advocated a 14.25% wealth tax to eliminate the national debt. In 1999 he said: "By my calculations, 1 percent of Americans, who control 90 percent of the wealth in this country, would be affected by my plan.")

Pie in the sky?

Clearly, Donald Trump has long forgotten his wealth tax. Instead, he is hell bent on further increasing rather than reversing runaway inequality. So where is the political space for a Sanders-like agenda?

For a moment, think again about what has happened over this past year.

There is a real opening for a visionary politics that protects and enhances the common good. But much more needs to be done to connect us together.

To keep the Sanders agenda alive, we should further refine it, turn it into a petition, get 25 million people to sign it and shove it under the noses of every politician in the country.

Hard? Yes, but not impossible.

We can start right now by building a mass educational network that reaches millions of Americans with the facts about runaway inequality, financial strip-mining and why a powerful common agenda is both needed and possible. In the 1880s the Populists, who then were engaged in an all out war with the moneyed interests, fielded 6,000 educators to build their movement among small farmers. We need 30,000 today, a number well within our reach.

This educational effort can help us see that the many issues we care about are deeply connected by runaway inequality. It will help us see why we need a common movement that goes beyond our issue silos, interest groups and identities. It does not ask people to give up their issues and identities. Rather, it asks that we make issue silos more porous and interconnected.