Whitney Biennial 2017: Kamasi Washington collaboration is first among the big, the boundless and the beautiful

Could the director of a Kamasi Washington video be the next big thing? 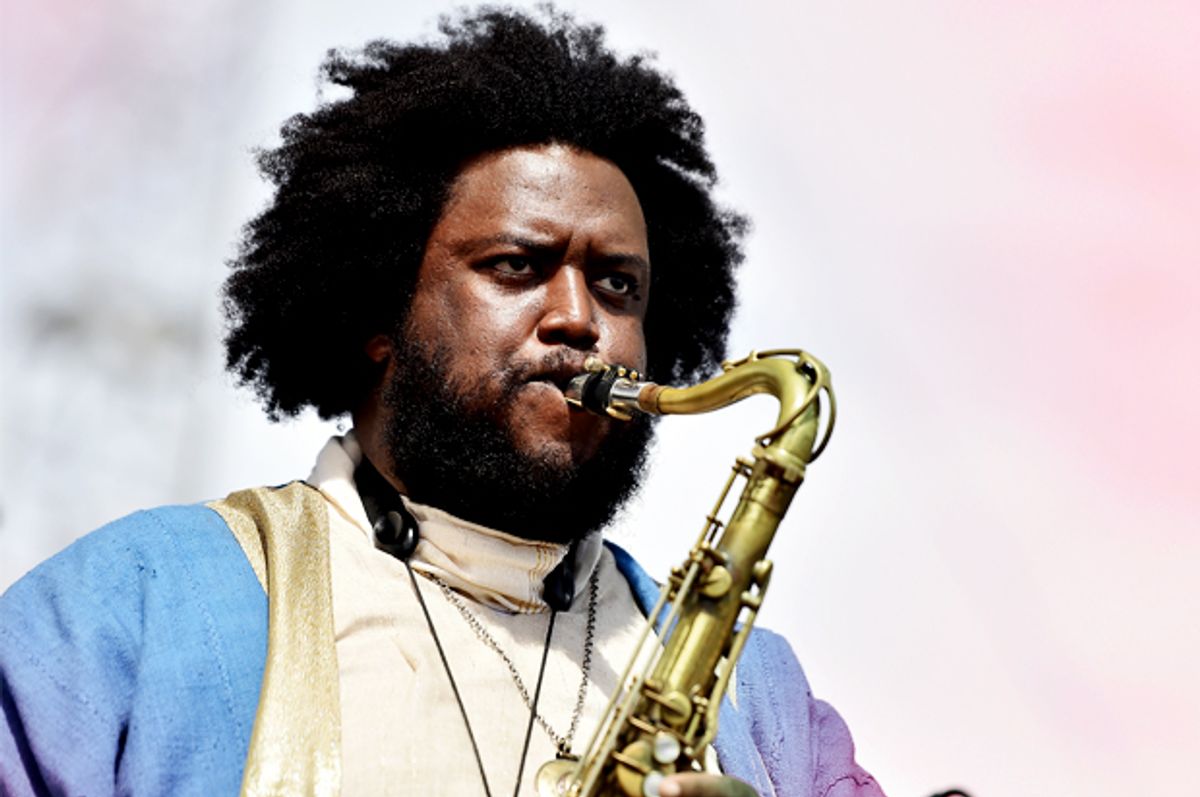 The Whitney Biennial is a survey of contemporary American art held every other year that serves to shape tastes and trends. The show has played a part in bringing artists like Jackson Pollock and Jeff Koons to prominence and it is billed as the place to find the next of their ilk — the next household name, the next big thing.

On Friday, the 78th installment of the show launched and runs until June 11. And the through line among the works is bigness: towering paintings, engulfing screens, walls covered not by one piece of faux bologna but by hundreds. It’s unclear what the next big thing in art will be, but it is clear that that thing will quite literally be big.

The piece attached to the biggest name in the show is no exception. The Los Angeles tenor saxophonist Kamasi Washington, who in 2015 rose to national prominence on the back of a Kendrick Lamar collaboration and the release of a sprawling, three-hour-long debut album called “The Epic,” has been given a room, three flat screens and a projector to display his latest work. Though the literal space that Washington’s piece, “Harmony of Difference,” occupies is small compared to some of the other works on display — a shooting guard amongst centers — figuratively there was nothing bigger.

“Harmony of Difference” is a 37-minute jazz suite divided into six parts. The first five parts (“Desire,” “Humility,” “Knowledge,” “Perspective” and “Integrity”) are accompanied by videos of Afrocentric paintings made by Washington’s sister, and they are projected on the flat screens. Each painting features a different color palette and is paired with a part of the suite. The camera zooms and pans over different parts of the canvases.

The idea underlying the suite, per its description, is to explore “the philosophical possibilities of the musical technique known as counterpoint.” Washington defines counterpoint as “the art of harmony between separate melodies" and says he hopes “that witnessing the beautiful harmony created by merging different musical melodies will help people realize the beauty in our own differences.”

This notion is most apparent in the last part of the suite, “Truth.” The projector comes on and displays magnificent scenes of life in Los Angeles: a mother and her son laughing on their couch, two young men wrestling on a field, a woman standing on the beach. The scenes are of the everyday, but they’re imbued with a mystical weight. The boy cups the universe in his hand. The men are wrestling amid rose pedals. Movements are slowed, the picture definition is ethereal, the lighting celestial.

The videos that accompany the suite were directed by A.G. Rojas, a versatile and zealous music video director who was born in Barcelona and raised in Los Angeles. Rojas’s best-known work is the noxious video for the Odd Future song “Earl,” which helped construct the rap collective’s mythos. The video for “Truth” could not be more different. Where the “Earl” video was grotesque and insolent, the “Truth” video is brazenly beautiful. Where the “Earl” video pointed a middle finger at death, the “Truth” video marvels at life.

Rojas’s video captures the simultaneous intimacy and grandeur in Washington’s music. The cinematography — particularly the just-past-sunset sheen — recalls Barry Jenkins’ “Moonlight” and Kahlil Joseph’s “m.A.A.d.” And a couple of the shots allude to “Daughters of the Dust.” Like in those films, the smallest details tell the stories of lives. Certain characters and imagery cycle back and become memory. The way Rojas intertwines these clips with mystical shots of the wider galaxy is sublime and deeply affecting.

There are a number of reasons why Kamasi Washington rather than his equally skilled contemporaries broke through and became a mainstream sensation. His work with Lamar, his exotic garb and his representing a burgeoning scene (Los Angeles jazz) were all factors. But what I think really caused Washington to resonate beyond the jazz world is the way his music is at once intimate and grand. “Harmony of Difference” builds to a climax that is cosmic but that is as tender as wrapping an arm around another’s shoulder. Washington and Rojas evoke the biggest feelings — universal ones that resist articulation — by elevating the smallest moments to epic proportions.