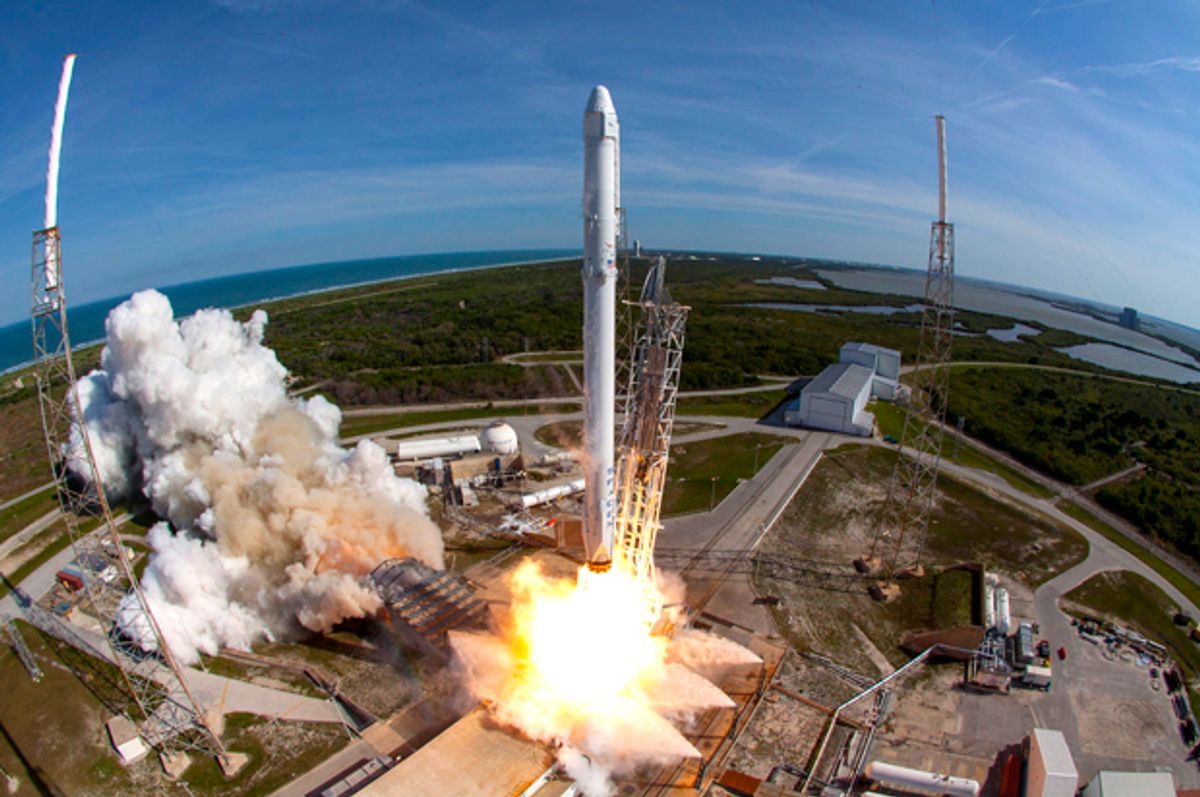 Getting people and payloads into space is expensive — very expensive. The astronomical cost of operating space shuttles compelled NASA in 2011 to stop flying the durable space-planes after 30 years and 131 launches.

Today, the cost of building and launching multi-stage rockets varies depending on orbital altitude, weight and how much insurance is needed against the ever-present risk of rocket failure, but it’s safe to say one launch can cost at least tens of millions of dollars. For example, sending a multi-ton payload on an Atlas V rocket from United Launch Alliance, the joint venture between Lockheed Martin and Boeing, starts at $109 million, according to the company’s recently launched “RocketBuilder” web tool. (This expense is typically shared among numerous customers.)

Driving these costs down is one of the main reasons why Elon Musk cofounded Space Exploration Technologies, or SpaceX, in 2002. Now, as early as next week, the company could reach a major milestone in an effort to drive its launch costs down 30 percent.

Already, the Los Angeles-area upstart has emerged as the economy class of space transport. By building its engines and rockets in-house, SpaceX offers relative bargains. Its website shows prices of about $1,200 per pound of cargo sent to the low-earth orbit used by the International Space Station and about $3,390 per pound to get to the distance that most telecommunications satellites use.

As early as next week, SpaceX will re-use a rocket it recovered last year during a previous launch in order to deliver a European telecommunications satellite into orbit. The company had said the launch would take place in March, but a scheduled launch of an Atlas V rocket at the Kennedy Space Center at Cape Canaveral, Florida was recently delayed until March 27. Because it takes a couple of days for the Air Force to reconfigure its tracking system for a new launch from a different platform, the historic mission could take place in early April.

Normally these expensive rockets break off and plunge into the ocean during a multi-stage launch process, but SpaceX is the first aerospace company to prove it’s feasible to send these rockets skyward to an altitude of 200 kilometers (124 miles), at a peak speed of six times the speed of sound. Instead of dropping into the ocean like a very expensive piece of garbage, SpaceX engineers figured out a way to gradually slow the rocket, rotate it and land it delicately onto a droneship, one of two floating robotic barges used by the company, or onto land. So far, SpaceX has recovered eight of these Falcon 9 rockets, most recently in January, including three of them that touched down at Cape Canaveral.

After it became the first private company to send a spacecraft to the International Space Station in 2012, the company’s workhorse Falcon 9 rocket and Dragon space capsule now perform NASA’s routine near-orbit space-transport work.

Musk has said the upcoming Falcon Heavy, a bigger rocket whose maiden voyage will help bring prices down further.

“We’re gonna launch Heavy this summer, as soon as we get Pad 40 back up and running,” Gwynne Shotwell, SpaceX President and COO, said during a press event at Cape Canaveral ahead of a mission last month, referring to the launch platform damaged in a rocket explosion in September. “Obviously, I said earlier, schedules never stick the way other things do, but we’re still targeting mid-year for sure with that.”

Last month’s launch was also a milestone for the company: It was the first round-trip mission to the ISS. SpaceX delivered supplies and research equipment to the station and then splashed down to earth on Sunday off the coast of southern California with a payload of scientific goodies, including samples aimed at advancing research in stem cells and bone diseases.