While Trump’s nominee was on Capitol Hill trying to appear in the mainstream, SCOTUS ruled he may be more extreme 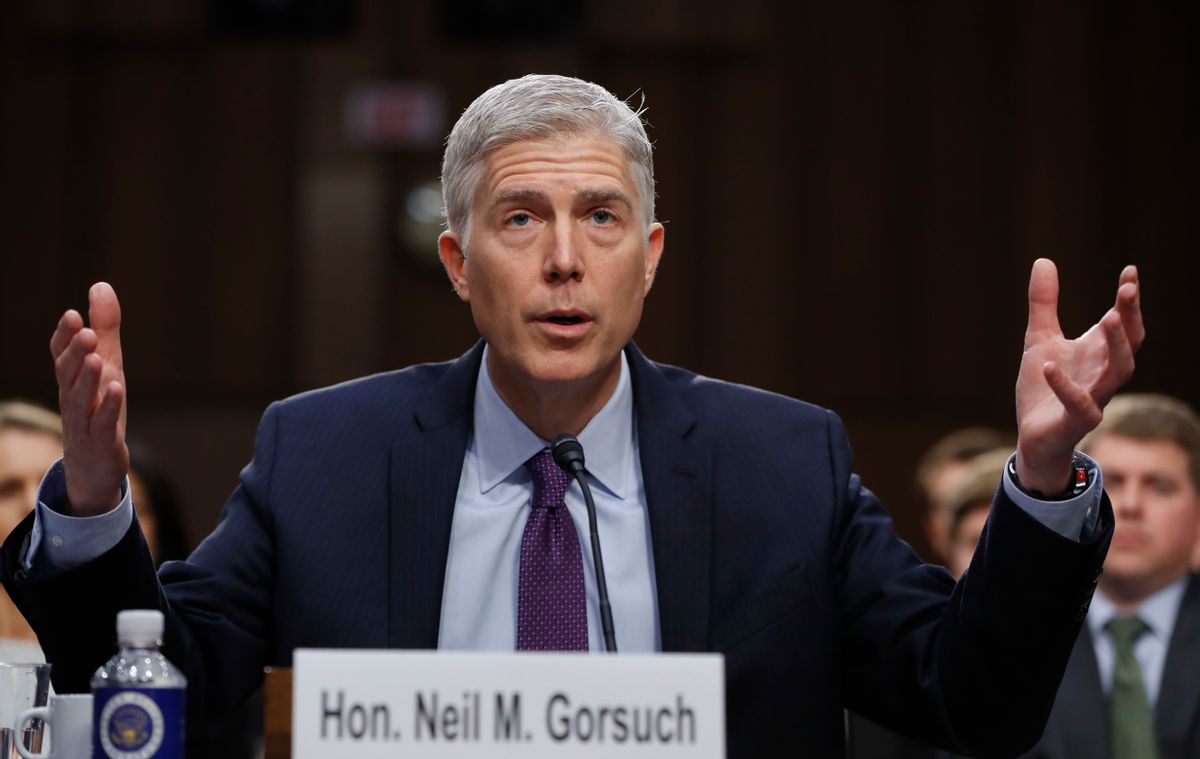 President Donald Trump’s nominee to the Supreme Court has only made news this week for not making news during his Senate confirmation hearings. But on Wednesday, as he sat for his third day of grilling on Capitol Hill, Judge Neil Gorsuch’s strict interpretation of the law setting a standard for public school education for students with disabilities was smacked down by every justice he hopes to join on the Supreme Court bench.

The federal Individuals With Disabilities Education Act requires “free appropriate public education” for all children. Currently a federal judge on the U.S. Court of Appeals for the Tenth Circuit in Denver, Gorsuch held in multiple cases that the law demands little “more than de minimis” — what he interpreted as “merely” a program intended for a student to show some annual gains.

But with its decision on Wednesday, the Supreme Court unanimously ruled that local school districts across the country must provide students with disabilities the environment to make "appropriately ambitious" progress. The opinion from the highest court in the nation held that "appropriate" as prescribed by the law goes further than what Gorsuch and the lower court had held.

While Wednesday’s Supreme Court decision didn’t directly deal with a case decided by Gorsuch, it did gut the standard Gorsuch set which had served as the precedent for the overturned decision.

In a 2008 ruling, Gorsuch applied the “de minimis” standard to rule against a family seeking reimbursement for the placement of a child with autism in a private residential facility because the parents believed their school district had failed to provide a free, appropriate public education under the Individuals with Disabilities Education Act. According to the parents, the student needed a drastically different approach in school, so they put him in a private school specializing in educating autistic children, where his behavior and academic performance improved markedly.

Gorsuch found that the school district had met its obligation to provide a free appropriate public education since the student in question made some progress toward goals, even if the gains were minimal.

Overturning another Tenth Circuit decision that relied on Gorsuch’s 2008 opinion, the Supreme Court ruled that his strict interpretation of the law narrowed the level of education disabled students are entitled to receive. The unanimous court decried the Gorsuch standard as one that would consign children with disabilities to an educational program that “can hardly be said to have been offered an education at all.”

Writing the majority opinion, Chief Justice John Roberts argued, "It cannot be right that the IDEA generally contemplates grade-level advancement for children with disabilities who are fully integrated in the regular classroom, but is satisfied with barely more than de minimis progress for children who are not."

For his part, Gorsuch deployed his now-familiar defense to avoid comment on controversial topics when quizzed on the Supreme Court’s ruling during his confirmation hearing on Wednesday.

“If anyone is suggesting that I like a result where an autistic child has to lose, that’s a heartbreaking accusation to me,” Gorsuch said, insisting that his ruling was just the unfortunate byproduct that occurs when a non-ideological judge carefully interprets settled law. “If I was wrong, Senator, I was wrong because I was bound by circuit precedent,” he told Texas Republican Sen. John Cornyn. Gorsuch argued that his 2008 ruling simply adhered to precedent set in a 1996 ruling — which cited rulings in other courts and its understanding of a 1982 Supreme Court decision. The Supreme Court ruled Wednesday that both the 1975 federal law and the 1982 court ruling interpreting it, are vague about a school's obligations.

Advocates for the 6.5 million students with disabilities in the United States argue that Wednesday’s Supreme Court ruling should sound the alarm that Gorsuch is outside of the mainstream -- despite his continued insistence to the contrary during his confirmation hearings.

“Today, the Supreme Court repudiated Judge Gorsuch’s IDEA decisions and overwhelmingly rejected his reading of the law,” said Lily Eskelsen García, the president of the National Education Association, in a statement. “More importantly, the unanimous decision concluded that Judge Gorsuch’s exact language is wrongheaded and antithetical to the IDEA.”

In a review of Gorsuch’s record, the Bazelon Center for Mental Health Law found that he “almost always” voted in favor of school districts over those with disabilities. As NPR reported, Gorsuch's opinions in eight out of 10 brought under either the Individuals with Disabilities Education Act or the Americans with Disabilities Act favored limiting the responsibilities of school districts.

In an earlier statement against his nomination, García complained that “Judge Gorsuch endorsed the lowest of expectations for students with disabilities, which allowed public schools to provide our highest-needs students with the bare minimum educational benefit.”