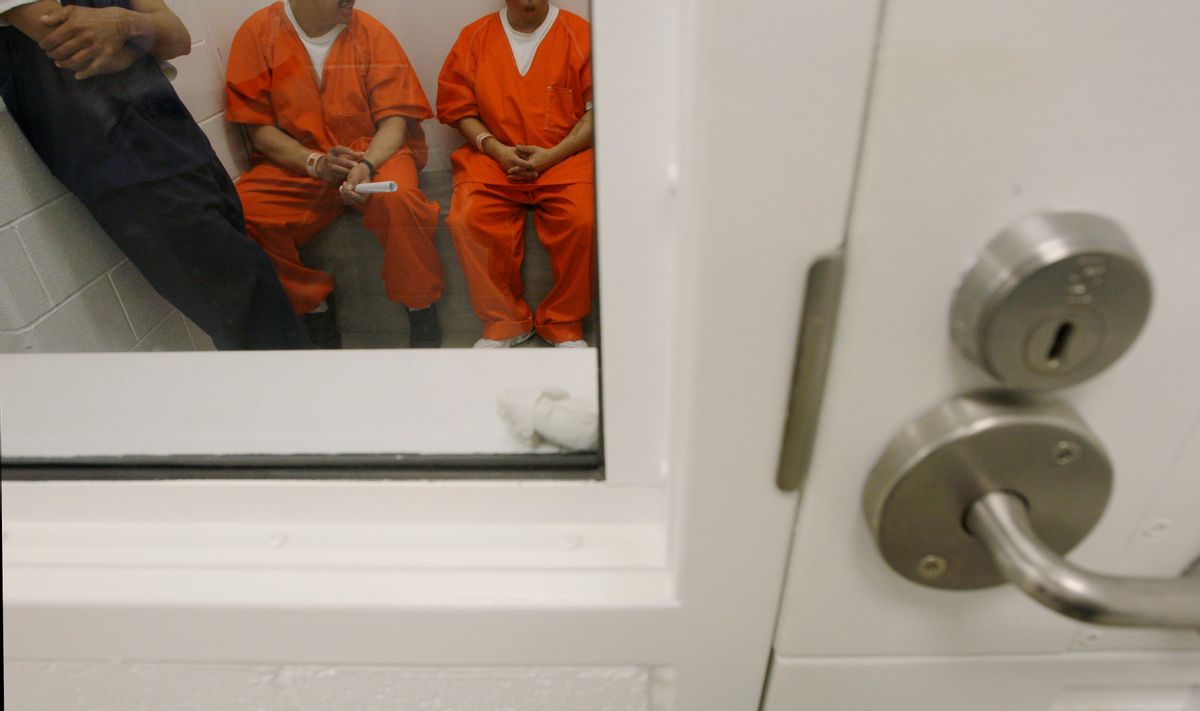 For more than 600 days and two Christmas holidays, Marlene and her seven-year-old son Antonio have languished in indefinite detention at Pennsylvania’s “Berks Family Residential Center,” a glorified term for an immigrant prison. Her child has been granted Special Immigrant Juvenile Status (SIJS), which the U.S. government says is supposed to “help foreign children in the United States who have been abused, abandoned, or neglected.” But instead of sanctuary, or even a fair hearing, Marlene and her son face open-ended incarceration and “expedited removal” orders, compounding the trauma they endured when they were forced to flee their home in El Salvador under threat of gang violence.

“My son always asks me when we are going to be able to get out of here and be with our aunts and uncles,” Marlene told AlterNet over the phone from Berks, using pseudonyms for herself and her child in order to protect their privacy. “It’s a really hard thing psychologically for him to be here. It’s not easy for a boy of seven years to spend Christmas here. The kids deserve freedom.”

Antonio is one of four children ensnared in long-term detention at Berks despite having been granted SIJS and submitted pending applications for legal permanent residency. Their lawyers say that the heavy-handed approach of immigration authorities towards these children—the youngest of whom is three—is unprecedented.

Carol Anne Donohoe, one of three attorneys who have represented families at Berks since it opened in 2014, told AlterNet that she does not know of any other case where children granted SIJS status were forced to remain incarcerated and subjected to expedited removal orders. Three of the SIJS-protected children have already been formally issued an Employment Authorization Document and are eligible to receive social security cards—signs that they are well-along in their legal efforts to attain freedom and residency in the United States. Furthermore, according to Amnesty International, “Under U.S. law, a minor with SIJS is considered to have been paroled in the U.S.”

“The question is, what is the reason Immigration and Customs Enforcement (ICE) feels compelled to continue to detain four kids, the youngest of whom is three, when they have pending applications for permanent relief?” Donohoe told AlterNet. “ICE has discretionary parole authority to release them at any time, but instead they have dug in their heels.”

According to Amnesty International, which has taken up the case, “Each family fled traumatic and life-threatening events. Antonio, Carlos and Josué, and their mothers fled kidnapping threats and severe physical and sexual violence. Michael was targeted for gang recruitment and threatened with death if he refused to join. After his friends were killed under similar circumstances, Michael and his mother escaped to the U.S. to seek asylum.”

Josué, the three-year-old, has spent more than half of his life incarcerated, learning “to walk and talk in confinement,” Amnesty notes.

Amnesty is joining with the children’s mothers in demanding the immediate release of the families. “Each of these families fled their home countries to escape horrific violence, including threats of kidnapping, death threats and physical and sexual assault. Instead of receiving a fair hearing and humane treatment as required by international law, they have each been held in detention for over 500 days,” the organization wrote in a letter to Jennifer Ritchey, the acting field director for the Philadelphia Field Office of ICE. “ICE officials have the decision-making authority on whom to detain or to release on bond, supervision, personal recognizance or other condition.”

Ritchey refused a request to answer these concerns, and ICE officials told AlterNet over email, "We decline comment on the specific cases referenced."

According to Donohoe, the detention of these four children is “just the top-most layer of how egregiously and inhumanely families are being treated.”

Roughly 31 moms, one dad, and 33 children are currently being detained in Berks, according to Karen Hoffmann, a legal advocate with ALDEA, the People’s Justice Center. ICE officials said 75 people are locked up at Berks, which is located in the town of Leesport. Most of those incarcerated hail from El Salvador, Honduras and Guatemala—all countries whose epidemics of violence and poverty have been fueled by U.S. policies.

Last August, 22 mothers detained with their children at Berks launched a hunger strike to protest their indefinite detention. In a letter to Jeh Johnson, then-Secretary of Homeland Security, they wrote, “Our children, who range in age from 2 to 16, have been deprived of a normal life. We are already traumatized from our countries of origin. We risked our own lives and those of our children so we could arrive on safe ground. While here our children have considered committing suicide, made desperate from confinement. The teenagers say that being here, life makes no sense. One of our children said he wanted to break the window to jump out and end this nightmare.”

Meanwhile, Berks is just one of three family detention centers around the country that are housing parents with their children in prison-like facilities that became a mainstay of former President Barack Obama’s response to mass, violent displacement from Central American countries.

Bethany Carson, an organizer with Grassroots Leadership, told AlterNet that roughly 300 people are currently locked up in a Dilley family prison and 200 in Karnes—both based in Texas. “We’re getting troubling accounts from families who are forced to fight their entire court cases from inside the detention centers, meaning they are detained for a lengthy period of time,” said Carson. “The other thing is that we're hearing of a lot of threats of families being separated.”

While many are concerned that family incarceration will worsen under Trump, those locked up in immigrant prisons point out that the Obama administration played a key role in their present-day plight.

“The other president [Obama] could have done something about this, but he didn’t,” said Marlene. “We did hunger strike at first, but now we see immigration doesn’t have a heart, they don’t care about our health. It doesn’t matter to them.”

“We want freedom, and really what they’ve done to us here is psychologically something that can never be erased,” she continued. “No one can understand how we’ve suffered here. It is unjust.”