A compendium of failed baddies, “The Legion of Regrettable Supervillains” is straight out of Trump's White House 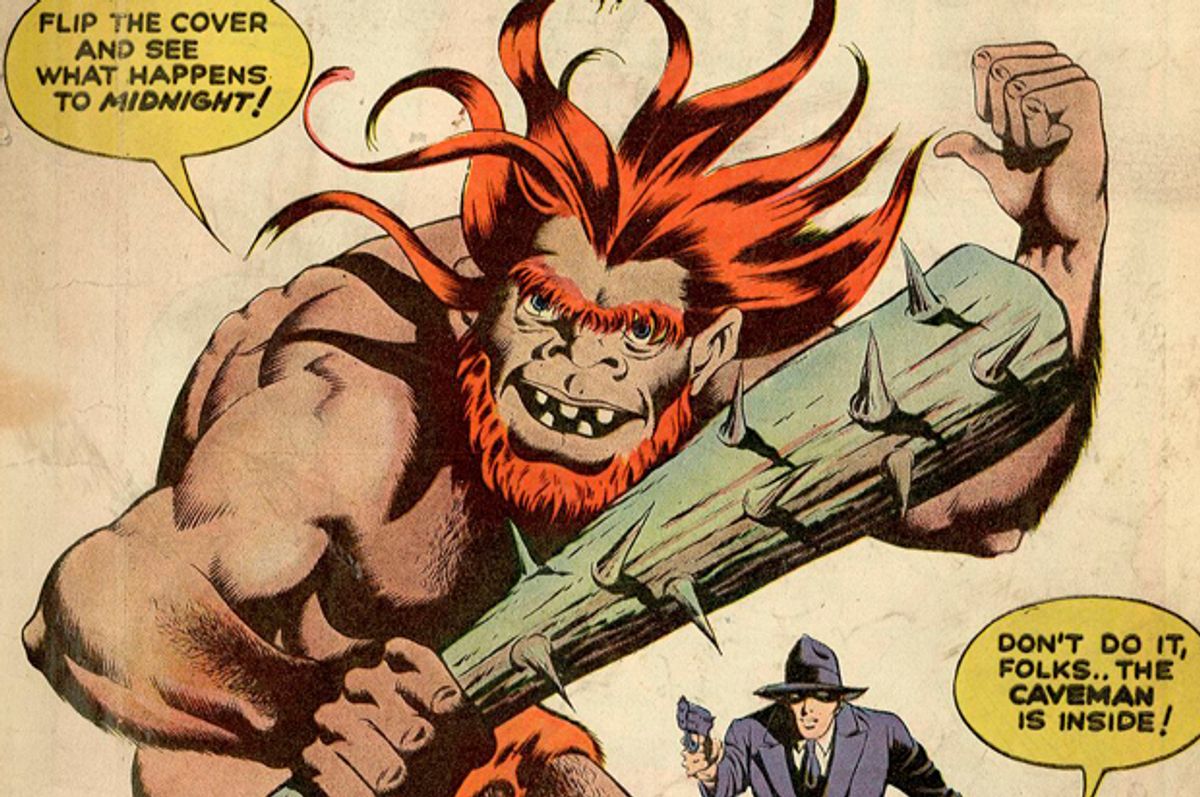 The Trump administration, from day one, has felt like the opposite of the Avengers or Justice League: a team of cackling, crazed supervillains. Folks have compared Trump to Lex Luthor, Voldemort and the Red Skull (personally, I think that comparison demands a slight variation). Artist R. Sikoryak has been drawing Trump (and his unreal words) right into classic comic book covers in “The Unquotable Trump.”

But as the White House continues to flout human rights and common decency, new comparisons are needed. That’s where Jon Morris’ brilliant new book comes in: “The Legion of Regrettable Supervillains” is a look at comic book villains, but you won’t find familiar names like Dr. Doom or the Joker. Instead, Morris remembers baddies who have been forgotten, and for good reason, such as Captain Law, Veda the Cobra Woman and the Horrible Hand — yep, that villain is actually an evil disembodied hand. Comics are weird.

These ridiculous villains are more than a distraction from the shit show of politics: they can also give us new ways of looking at Trump and company. Here’s the scoop on a smattering of the obscure heels Morris immortalized and who they most resemble on Team Trump.

Spider-Man’s list of enemies is almost as impressive as Batman’s: the Green Goblin, Dr. Octopus, the Vulture, Venom. . . and then there’s Swarm. The name’s not so bad, but everything else about Fritz Von Meyer is a mix of reprehensible and rubbishy. First, he’s a Nazi war criminal on the lam in South America. Second, thanks to a radiation accident, Von Meyer bonded with a queen bee, and now his body turns into a whole mess of bees. That means Swarm is, literally, Nazi bees, which can ruin a picnic or democracy.

Trump equivalent: Let’s go with white nationalist creep Steve Bannon, who always looks like he’s been repeatedly stung by bees in the face.

This dastardly fellow turned up in the early 1980s when he battled Luke Cage, Spider-Man, and Storm with the power of. . . smoke. Smokescreen was a tool of a nefarious force: preachiness. He only existed to let Marvel deliver a “Smoking is bad!” message.

There are many regrettable duos in comic-book history, usually on the hero side of things. Actual crime-fighting partners include Nightmare and Sleepy, the Star-Spangled Kid and Stripesy, and Airmale and Stampy. But Baby Face and Brother are a terrible twosome of malicious miscreants, described by Morris as “a mismatched pair of apparent philanthropists whose freewheeling ways with fat wads of cash hide their sinister agenda.” Why mismatched? Well, though the two are equally well-dressed, Brother is covered in bandages to hide the fact that he’s “a snarling, vicious gorilla.” I assume this will be the number one use of bandages under Trumpcare.

Trump equivalent: Who else but Trump sons Eric and Donald Jr.? The only question is which real-life brother is actually a vengeful gorilla in disguise.

Zor is one of the more sympathetic characters in Morris’ book. When the diabolical Sir Squinchworth (what a name!) finds Zor frozen in a glacier, Sir exploits Zor. You almost can’t blame Zor for lashing out at the world with his spiked club and Hulk-like grammar. Sadly, Zor lacks the smarts of Jack Handey’s Unfrozen Caveman Lawyer.

Trump equivalent: Despite their opposite levels of couth, Mike Pence and Zor are deeply connected via a longing for the days of yore. Zor would love to return to a simpler time, before he was frozen in a glacier. Pence would also like to go back in time, not geologically, but socially, in terms of abortion, gay rights, birth control, science, etc. Pence and Zor are both better suited to a world where the closest thing to a peer-reviewed research article is a guy yelling, “Fire bad!” This mortal enemy of Airmale and Stampy — I told you they were real — is probably already in the Trump administration. As Morris wrote, “Also known as the Reverse Robin Hood, he hewed to his inverted moral code by plundering the poverty-stricken and giving whatever he found to the well-off. I think we can all agree that Robbing Hood might have had a career in politics.” You don’t say.

Trump equivalent: In Michigan, Betty DeVos, currently the Secretary of Education somehow, used the cloaking device of choice to funnel money away from public schools and into private schools. You can’t get more Reverse Robbing Hood than that. This enemy of the wonderfully named Buzz Crandall was one of the insane creations of Fletcher Hanks, who many consider the first auteur in comic books. Lepus had his issues, but lack of honesty wasn’t one of them. He flat-out said, “I shall destroy all the civilized planets!” Lepus’ big plan was to bang Earth and Venus together like pool balls, but his science wasn’t up to snuff.

Trump equivalent: Scott Pruitt, EPA administrator, is (seemingly) less furry and ambitious than Lepus, but he’s also an enemy of planets, specifically this one. In a better world, Cesspoole would have been fighting Batman or Superman for the past 80 years. Unfortunately for the bad doctor, his enemy was Stumbo the Giant, who wasn’t exactly a mainstay himself. Cellpoole hated all giants and this “fiendish inventor” was kind enough to explain why: “How I loathe giants! They’re physically so powerful while I’m so puny!”

Trump equivalent: Ben Carson, I guess? They’re both doctors. Carson believes in some crazy stuff, so why not giants?

Probably the most successful of Morris’ unsuccessful villains, Stilt-Man is still totally, utterly preposterously lame. Debuting back in 1965, Wilbur Day steals some gizmos and uses them to build a suit whose main feature is telescoping legs, which allow him to get really, really tall. That might come in handy at basketball, but it’s not the greatest for committing crimes, fighting Daredevil, or doing much of anything, really. Stilt-Man is considered a joke by comic fans and characters alike.

Trump equivalent: Donald Trump himself. Hear me out.

Stilt-Man is a small-time crook who uses ridiculous technology to make himself big, or at least tall. He’s like a baby standing on Shaq’s head.

Donald Trump uses ridiculous technology (Twitter) to make his voice louder than anyone’s. He props his fragile ego up with relentless branding, endless boasting, compulsive lying and an enormous silver spoon, all to make himself feel like a big man, lording over the losers — when anyone with a brain can see he’s the biggest loser of all.

All of Trump’s tweets and twaddle are fragile stilts supporting a human nothingburger. Sad.