Why are Republicans so cruel to the poor? Paul Ryan's profound hypocrisy stands for a deeper problem 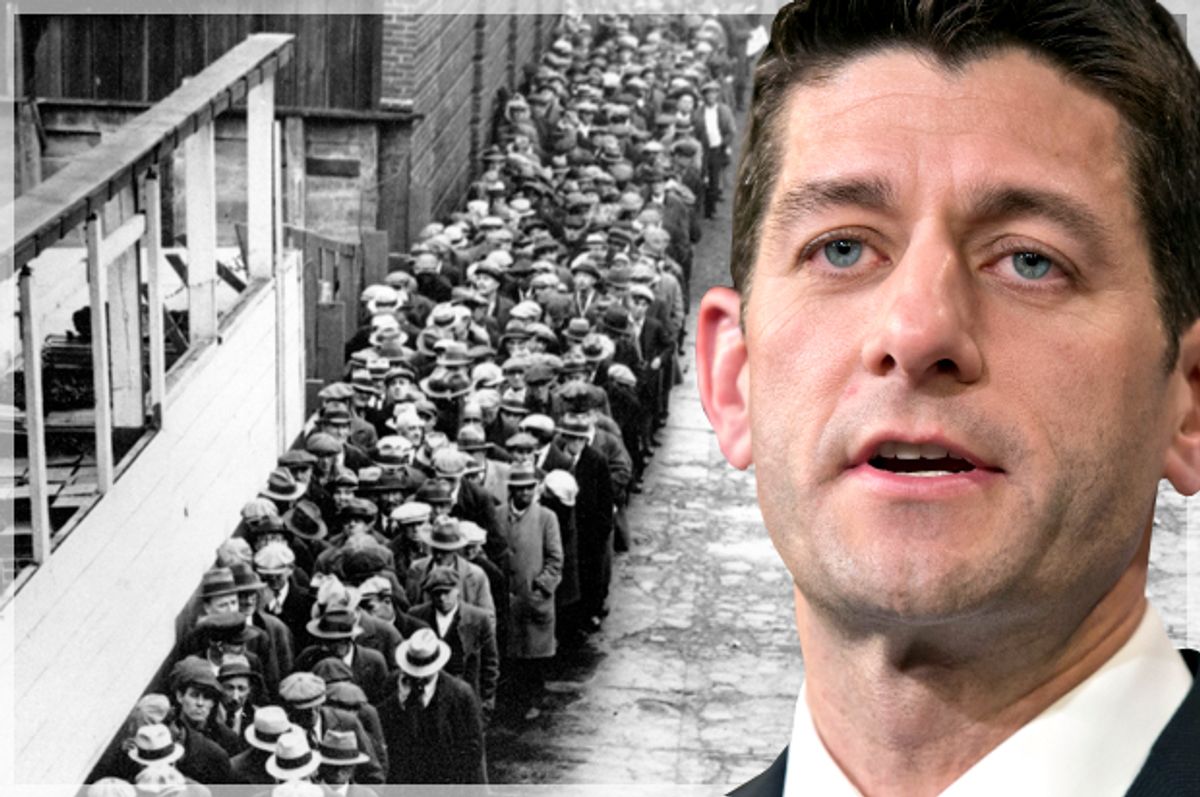 Republican Paul Ryan, like most other members of the U.S. Congress, is a millionaire.

Christa Patton is 68 years old. She is frail and no longer able to leave her home. She lives on a fixed income. Patton told Van Jones on a recent episode of his CNN show "The Messy Truth" that she would not be able to eat without the Meals on Wheels program.

Paul Ryan is the speaker of the U.S. House of Representatives. By his own account, in college he used to hang out with his friends and drink beer while sharing his dreams of cutting Medicaid. When Ryan was 15 years old, his father died from an alcoholism related heart attack. Ryan and his family then received his father's Social Security survivor's benefits. Ryan used that money to attend college. This was not the only money that Paul Ryan received from the federal government. His family built its wealth from receiving government contracts.

Like his idol Ayn Rand (who argued against the very idea of government and the commons yet received Social Security and Medicare), Paul Ryan has combined meanness, cruelty and callousness toward the weak and the vulnerable with gross and unapologetic hypocrisy.

Republicans like Ryan — along with the millionaires and billionaires who comprise Donald Trump's Cabinet and inner circle — literally want to take food, shelter and health care away from poor people like Christa Patton. Today's Republicans view these Americans as useless eaters to be disposed of by means both passive and active.

It is normal to feel aghast at and disgusted by the Republican Party's war on the poor. The more challenging and perhaps even more disturbing task is to ask why today's conservatives feel such antipathy, disregard and hostility toward poor and other vulnerable Americans. Certainly greed and a slavish devotion to a revanchist right-wing ideology are part of the answer. But they may not be sufficient

Conservatives are more likely to exhibit social dominance and bullying behavior. This is a function of their authoritarian tendencies. The election of Donald Trump exemplifies this phenomenon.

American political elites often use language that robs poor and other marginalized people of their individuality, humanity and dignity. This language also creates a type of social distance between "middle class" or "normal" Americans and those with economic disadvantages.

Conservatism is a type of motivated social cognition that by its very nature is hostile to members of groups on the lower rungs of the social hierarchy.

Social psychologists have shown that, in effect, poor people become invisible to the rich and upper classes.

The psychological dynamic known as "diffusion of responsibility," whereby people tend to ignore those in crisis — especially if they're perceived as being of a different social group, race, ethnicity or class — also encourages a lack of empathy and concern. It undercuts policies meant to offer direct assistance to vulnerable and marginalized individuals and communities. A perverse corollary to the "diffusion of responsibility" can also be used to legitimize punitive policies that target specific individuals and groups.

The myth of meritocracy and its cousin, the myth of individualism, exert a powerful hold over many Americans. This is especially true among conservatives. Social scientists and others have repeatedly demonstrated that American society is not a true meritocracy. Other research has shown that intergenerational income and class mobility are also relatively uncommon in the United States.

Likewise, the concept of the self-made person whose success is a function of "rugged individualism" is also a fantasy better suited to its dime-store origins than as a serious way of understanding American society. Nevertheless, these cultural mythologies do the practical political and social work of legitimizing the Republican war on the poor.

Race and class are intimately linked together in American (and Western) society. As such, poor people are incorrectly stereotyped as being overwhelmingly black and brown. In the United States, the intersections of race and class also affect the media narratives and cultural scripts that have dictated who has historically been considered "deserving" (widows of war veterans, people with disabilities, single white mothers, children, elderly folks) and "undeserving" (adult men and people of color) poor.

Conservative media outlets — and sometimes mainstream media ones — routinely use false and misleading information to discuss the social safety net. For example, Lyndon Johnson's "Great Society" programs as well as Franklin D. Roosevelt's New Deal initiatives were extremely successful in alleviating poverty and improving the general welfare of Americans.  Yet right-wing media outlets consistently tell their audiences that the "Great Society" and New Deal programs were failures: This narrative intentionally ignores Republican Party’s efforts to undermine the effectiveness of those programs.

Among evangelical Christians, what is called the "prosperity gospel" has become increasingly influential. This grotesque interpretation of Christian doctrine assures its adherents that poor people deserve their circumstances because God has chosen not to bless them with money. Conversely, rich people have more money because God has deemed them worthy. Christian evangelicals — especially those who believe in the prosperity gospel — were a key constituency in Donald Trump's winning coalition.

The bad news is that conservatives' brains cannot be modified to make them more empathetic and sympathetic toward their fellow human beings. Nor is the harmful messaging and narratives from the right-wing media about poor folks — and "the other" more generally — likely to change in the foreseeable future.

On the level of practical politics, there have been no substantial negative electoral consequences to Republicans' decades-long war on the social safety net and the common good. Thus, there is no rationale in terms of an electoral calculus for the Republican Party to stop pursuing such policies. Moreover, it is unlikely that conservative red-state voters will "wake up" and stop supporting a political party that actually leaves them less economically prosperous and financially secure. Here, poor and working-class Republican voters are like Pavlov's dogs, seeking out abuse from their masters in the hope that the latter will hurt other Americans even more.

But maybe there is hope. Americans must reinvigorate their social and political institutions across the divides of race and class. This is the social glue that can be used to transcend the culture of cruelty that the Republican Party and the regime of neoliberal economics have imposed in the United States. Political messaging is critical: America should be a true "we the people" democracy that meets the needs of all people and not just those of the rich and the powerful. The Democratic Party must improve the way it communicates this vision to the American people.

Unfortunately, the Republican war on the poor is but one sign of the deep moral rot at the heart of American society. This crisis extends well beyond the election of Donald Trump and the cruelty that has been both promised and so far enacted by his cadre and the Republican Party. If a society is judged by how it treats the most vulnerable and weak, America is a country in decline, a country whose citizens should be ashamed of their leaders — and, in some cases, ashamed of themselves.