After this disastrous week, it's clearer than ever: Yes, Donald Trump is a "real" Republican

Don't believe that Republicans in Congress secretly hate Trump! It's time to take their bootlicking at face value 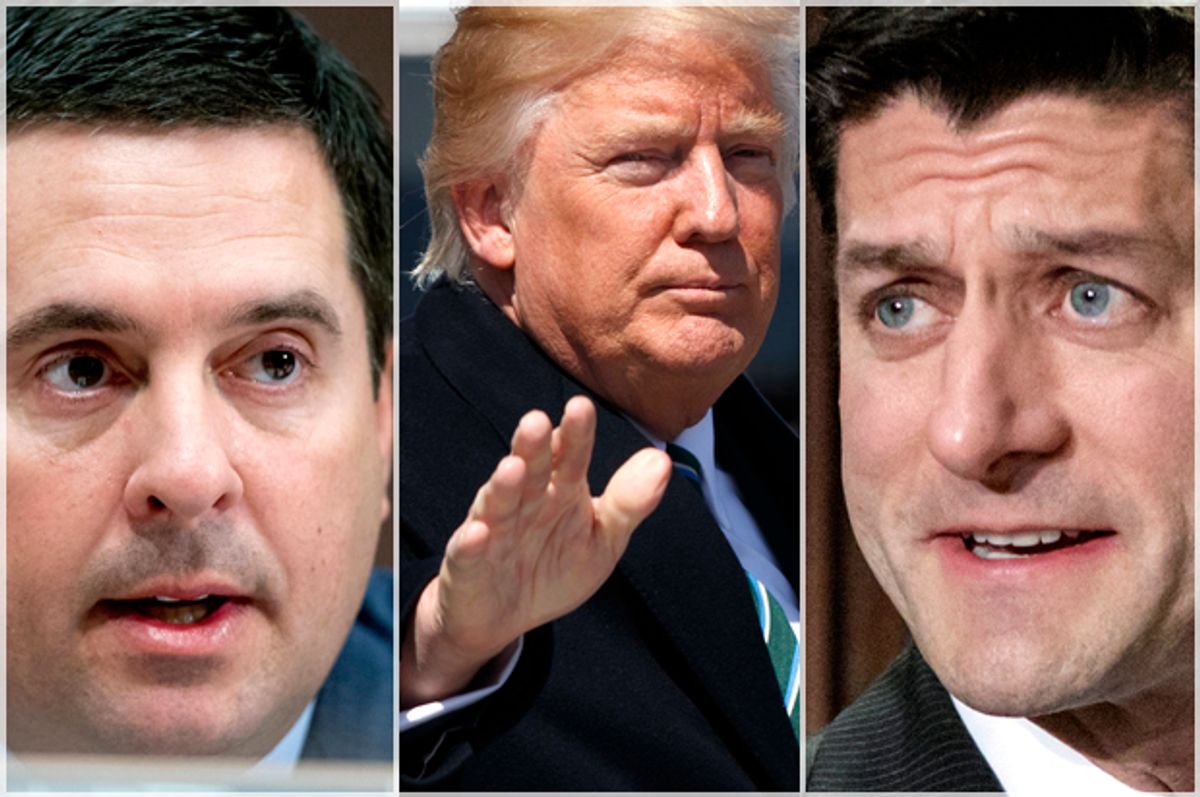 In the first three months of Donald Trump's presidency, a narrative has taken hold in the political punditry that owes more to wishful thinking than to empirical observation. Congressional Republicans, the narrative goes, are smart and savvy enough to realize Trump is an unhinged, incurious crank. They are only using him, the thinking goes, to pass their right-wing agenda. They don't really think of him as the legitimate head of their party.

"The relationship between President Donald Trump and his allies in Congress is rooted less in a simpatico bond than in a particularly ugly kind of transactional politics," Brian Beutler of the New Republic wrote on Thursday, in a typical example. "Republicans tolerate his racism, ignore his corruption, laugh off his erratic behavior, and in exchange he leaves the core of the party’s domestic agenda unmolested."

But this week in politics should raise a troubling alternative possibility: Trump is not an outlier in his party, but is simply an inevitable outgrowth of years of Republicans wallowing in bigotry, replacing proper policy analysis with half-baked ideological posturing and promulgating hyper-partisan conspiracy theories. Trump's paranoia and proud ignorance have worked for him because those qualities have come to define the 21st-century Republican Party.

The first example is no doubt Rep. Devin Nunes' bizarre behavior this week, which was especially troubling in light of his position as the chairman of the House Intelligence Committee. As Salon's Heather Digby Parton explained:

In a nutshell, Nunes claimed that this unnamed source showed him some intelligence intercept from the transition period before Trump took office that indicated members of the Trump team were under surveillance. Inexplicably, the congressman thought it was appropriate to immediately inform the the subject of the investigation and tell the world that he did it. Under questioning in the two (!) press conferences that Nunes held on the matter, it became clear that he was talking about routine legal surveillance of foreign actors that caught some conversations with Trump transition officials.

One can spin out a million theories about Nunes' cartoonishly unctuous behavior, but perhaps the most likely explanation is also the simplest one: Nunes is sincere about being a Trump sycophant.

After all, Trump has managed to convince millions of Americans, mostly Republicans, to buy into his self-mythologizing about how he's a dealmaking genius businessman. Why shouldn't their congressional representatives be wowed by the same nonsense? It's not like being a right-wing nut presents any real obstacle to holding office in most Republican-leaning districts. If anything, as Trump's election proved, being a kook can actually endear you to the conspiracy-minded conservative masses, who can feel even more validated in their false beliefs by elevating one of their own to office.

Yes, Trump loves throwing out wild conspiracy theories. How does that make him different from congressional Republicans, who have spent the past few years suggesting, without a shred of evidence, that Hillary Clinton did something nefarious with regard to Benghazi, that Planned Parenthood is selling baby parts on the black market, and that climate scientists are engaging in a worldwide conspiracy to hoax the public about global warming?

The behavior of Republicans about Russiagate largely suggests a genuine enthusiasm for the clown in chief. The GOP strategy for Monday's intelligence committee hearings was mainly to run with Trump's impulsive accusations of wiretapping by Barack Obama. That, coupled with Nunes' puppylike eagerness to please Trump by twisting some faint and flimsy evidence to support those accusations, can probably be taken at face value: Most members of the Republican congressional delegation support Trump because they see a fellow traveler and they genuinely love Dear Leader.

The second example from the week, of course, is the disastrous rollout of the American Health Care Act, the Republican bill meant to gut or replace Obamacare. The entire debacle has been an object lesson in why Trump's indifference to functional policy concerns reflects the attitude of the Republican Party more generally.

Speaker Paul Ryan has long been held out as the exemplary Republican policy wonk. With this bill, he's made it quite clear that he's far from the crafter of innovative solutions that he's supposed to be. Ryan had all these years that Obama was in office to work on a workable replacement for the Affordable Care Act, should the opportunity ever arise. What he's produced reads like what a high school student would come up after spending a weekend overdosing on Ayn Rand novels.

The slapped-together feeling of the Republican bill has only worsened since its initial unveiling, as Ryan and his fellow House Republicans have hastily rewritten the bill with a grab bag of provisions chosen to appease congressional holdouts, with little concern shown for whether these ideas will pass legal muster, much less work as policy. The result is that a vote will apparently be held — whenever it finally happens — on a bill that has less thought and care put into it than your average person's weeknight grocery shopping list.

In his first few months in office, Trump has been roundly criticized for issuing a bunch of ill-conceived executive orders, such as his Muslim travel ban or his order to build a wall along the Mexican border, that seem to have been thrown together on the fly so the president can pretend his impetuous campaign promises were actually sincere policy proposals. Which they were clearly not, as evidenced by the inability of anyone on his team to come up with anything resembling coherent policy.

But really, is the Obamacare repeal any better? It seems to be born out of the same impulse as Trump's Mexican wall: Republicans liked promising they were going to repeal Obamacare because it was a popular applause line with right-wing audiences. Now, rather than admit that they were blowing smoke that whole time, they've coughed up a bunch of non-policy (and tax cuts) and are trying to pretend that was the plan all along. It's the same thing Trump is doing, except this time the blame can be spread out among the entire Republican congressional coalition.

Trump's BS act got him into office, but now that he's hitting the cold reality of governance, he's finding that he can't simply mug and shrug his way through the job. His approval ratings have been plummeting. But most other Republican politicians are running the same con as Trump, just with less flash and dazzle. Perhaps the multiple disasters of this week will help pundits — and the public — see that the empty-suit problem in the Republican Party extends far beyond its unlikely president.